The last thing I remember before I blacked out was getting up from the couch to eat.

I was an otherwise healthy 12-year-old kid in middle school. I'd just finished a Mountain Dew, my first love, which I drank whenever I was thirsty. My mom called me to the kitchen for dinner, and I stood up. But as I made my way across the living room, everything got dark. I could feel my heart throbbing in my ears, and then, I felt nothing.

When I say I drank a lot of Mountain Dew, I really mean it was the only thing I drank. For several months of my childhood, I had unlimited access to the neon-green sugar bomb, and I took a swig whenever I was thirsty. After I blacked out, I couldn't remember the last time I'd had a drink of water. It had been months.

It was my cigarette. I was addicted. And I can remember the first time I was drawn to the brand by a marketing team, which is terrifying to think about. We know brands want to reach our kids, and they do, with hundreds of sneaky, targeted ads displayed on the hundreds of tech devices kids are tapping on. But I'm willing to bet most of us don't know when those brands are sending real, physical people out to target our children, and get them hooked. I know this happens, because it happened to me.

That's why I was delighted to learn that several fast-food chains -- McDonald's, Burger King and Wendy's among them -- dropped soda off their kids' menus. It's a small step toward curbing childhood obesity and any number of other problems that can arise from excess soda drinking.

You're about to learn one of those problems, on the EXTREME end of the spectrum. 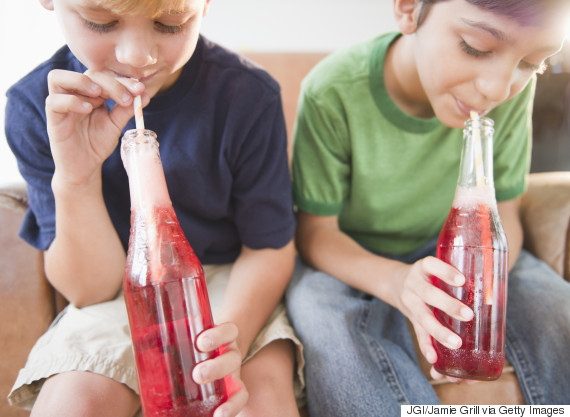 My addiction to soda started one day at summer camp -- a sports camp, where health is touted in the damn pamphlet -- when a big-ass Hummer rolled up. It was gigantic, covered in Mountain Dew logos with green and red flames, and blasting '90s rap on exterior speakers (it looked a lot like this). So cool!

When it reached the edge of the kickball field where we'd been playing, we saw that its bed was completely full of Mountain Dew cans. Two rad dudes popped out, flinging Mountain Dew backpacks at us and telling us all over the loudspeakers that we could fill said swag with as much free Mountain Dew as we could carry. Do you know what happens when cool dudes give unlimited free sugar to children whose parents are not in the area?

After that, I never stopped drinking the stuff. I drank hundreds of cans, each weighing in at 170 calories and 46 grams of sugar. YUM. That is, until I blacked out.

I woke up to my mom screaming. My head had completely obliterated my dad's model boat, but I felt pretty good, like I'd just woken up from a long nap. My parents later told me that I stood up, cocked my head back and fell like a sack of over-caffeinated potatoes -- they thought I was having a seizure.

It turns out that I was suffering from extreme dehydration. When I got to the hospital, it took three medical personnel to find my veins, because without much water, they were completely collapsed. My treatment was a gigantic bag of hydrating fluids, and I was told I should never drink soda again.

Look, I don't want to make you feel bad for my childhood self. He was awesome, in my opinion. But if childhood obesity isn't enough to scare people into curbing their kids' soda intake, maybe the possibility of cool marketers and hospitalization will.

And I didn't even have access to high-octane energy drinks at the time. Those actually can kill kids.