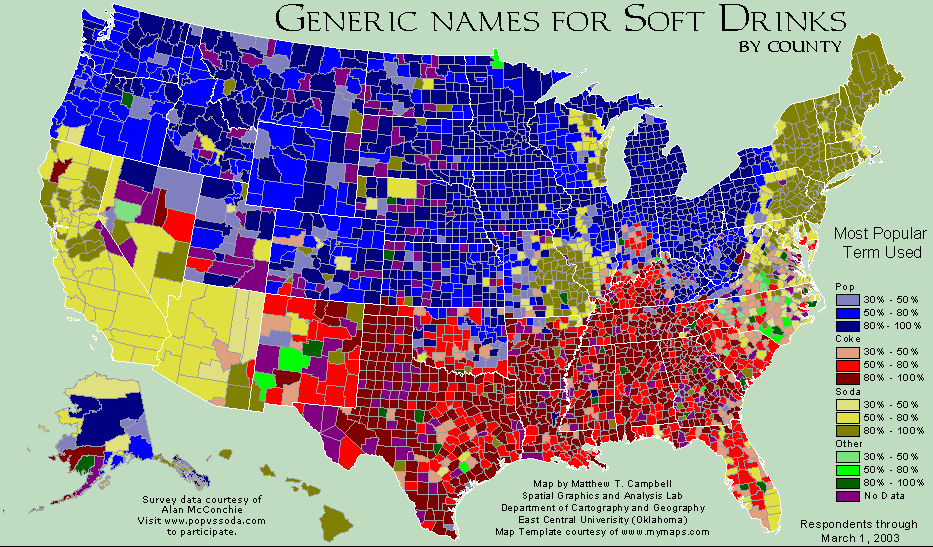 We always knew that in some parts of the country a soda was called a pop (or vice versa), and in other regions all pops (or sodas) were referred to as a Coke. But thanks to the research and mapping by Matthew Campbell and Prof. Greg Plumb of East Central University in Oklahoma, we can see exactly who says what and where.

Referring to the carbonated soft drink as a Coke (even if it's not a Coca-Cola) is common in the southern states, soda is the term for it on the northeastern coast and pop is the word in the midwest. What do you call it? And where are you from? Leave a comment below!

Make your own soda (pop or Coke) at home.

Get the Homemade Ginger Ale recipe from Love & Olive Oil

Get the Cranberry Tea Spritzers recipe from Garnish With Lemon

Get the Italian Soda recipe from Oh, Sweet Basil

Get the Concord Grape Soda recipe from Saveur

Get the Sassafras Root Beer recipe from Simply Recipes

Get the Cucumber, Mint and Basil Soda from Bon Appetit

Get the Blueberry Soda recipe from My Magic Mom

Get the Guinness Cream Soda recipe from Chow

Get the Cantaloupe Soda recipe from Aida Mollenkamp

Get the Cream Soda recipe from Martha Stewart

Get the Strawberry Soda recipe from Chow