Abdulhai remembers his father being killed by the Taliban. "Anyone who takes up a weapon in revenge, whether the Talib or any other, is acting like the Talibs who murdered my father," he says, in a matter of fact way. "The solution does not lie in taking revenge, but in people coming together like the people of Egypt to defend themselves in a nonviolent way."

Nine people gathered this morning for an unexpected although welcome meeting here in Kabul, in the home of the Afghan Peace Volunteers, at which Raz Mohammed, a member of the group who is from Wardak province, had arrived along with a fellow student, named Rohullah. The meeting included Tajiks, Hazaras and one Pashtoon. We were surprised and pleased to see our good friend. 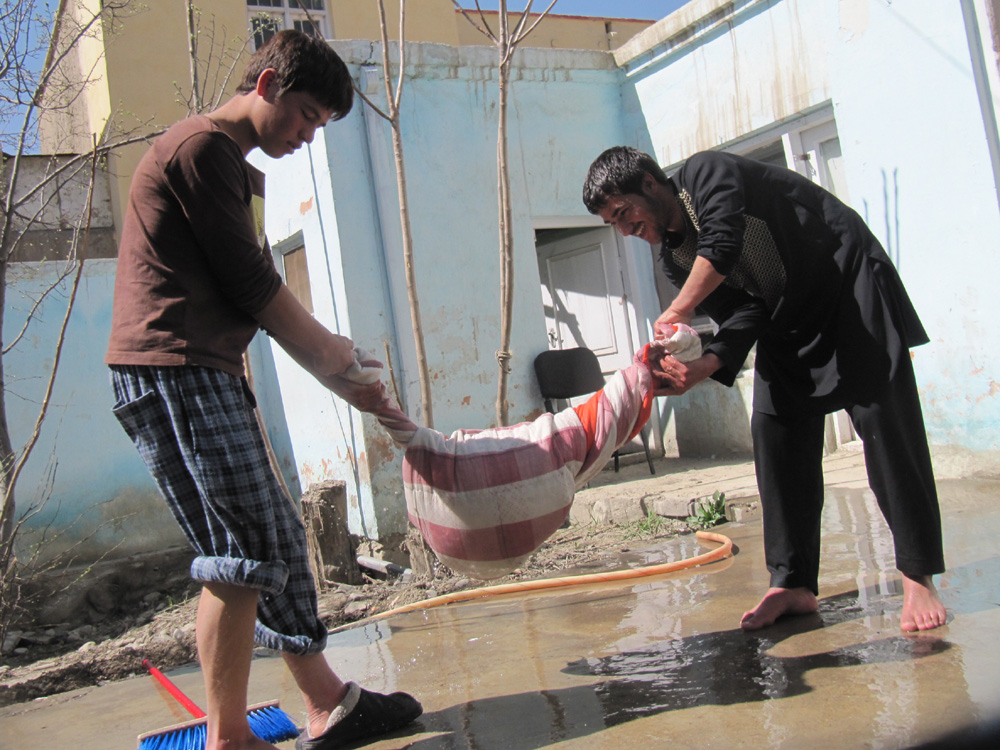 Abdulhai, a Hazara, washing a quilt with Raz, a Pushtoon,at their community home.
They belong to two Afghan ethnic groups perceived as 'traditional enemies'

His companion Rohullah, a Tajik, came from the Pul-e-Khumri district of Baghlan province. We'd been involved in a conversation, the previous night, about how to deal with Talib fighters, so now one of the Afghan Peace Volunteers wondered if there were Talibs living in Rohullah's district. "Yes," said Rohullah, "though Talib fighters are relatively few in number."

Rohullah believes it is important for locals to discuss and try to understand main Talib demands. Local people can manage negotiations, whereas foreigners are slow to grasp the conservative expectations of the Taliban. He emphasized that it's important to talk with the Taliban. "A soft neck will not be slaughtered by the sword," says Rohullah, quoting a Dari saying. "A Talib will have a conscience. If we offer him our 'soft neck' in negotiations, he will not use his 'sword.'"

He feels certain that under the present circumstances foreign forces shouldn't be there. Negotiations cannot be facilitated by foreigners, and in fact a resolution of the conflict hinges on ejecting the foreigners.

Ordinary Afghans are cornered, caught in the cross-fire between angry Taliban and angry foreign forces, as the NGO Oxfam insisted in their 2010 report fittingly titled 'Nowhere to Turn.'

People are not happy about encroachment into their homes through night raids, whether conducted by foreign or Afghan forces. Personally, Rohullah believes the night raids aren't effective, building up hatred when civilians are inevitably hurt or killed.

"Drones also come," says Rohullah, "and the operators of these drones don't have accurate information about the places where they attack."

Hakim then asked all of us to consider a hypothetical situation: if each of us came face to face with an angry, fundamentalist Talib fighter who believed he must kill all who oppose him, what would we do? Kill him? Send him to prison? Discuss issues with him?

As we went around the circle, none of the young people favored killing the Talib fighter. "Speak gently," said Raz Mohammad. "Find the origin of support for the Talib fighter," Rohullah said. Then he posed practical questions. "Where do the weapons come from? How can we cut the flow of weapons? Who are the elders who influence this man and how can we speak to them?"

Ghulamai, the youngest among us, says we must try to talk with the Talib.

Abaz thinks there must be some coordinating body for the Taliban, leading him to wonder who would be directing this Talib to act viciously. He reminds us that all of the Talibs are human. And he wonders if some people, from all sides, keep fighting because they want to perpetuate conflict. Perhaps they profit from it.

Ali says it is best to speak with the Talib, to find out where they are coming from, to listen, show respect, and yet try to persuade them that fighting isn't the way forward. Help them see alternatives to revenge.

Nao Rozi is the only one among us who has fought in the Afghan Army. In 2008, he enlisted. At first, he worked as a security guard, but later he was sent to Kunar where, over the course of one year, he participated in many operations. In one operation, a spray of bullets killed twelve young Talibs, and he guessed that they were all no more than 20 years of age.

At that point, he realized that he was fighting an enemy he didn't know. Wanting nothing more to do with the fighting, nor willing to take the risk of hurting civilians, he left the Afghan Army one and a half years before his commission ended. He experienced severe trauma, so serious that he began to harm himself, even attempting suicide. His family encouraged him to see a psychiatrist, and together, they helped him recover. Now, he is upbeat, friendly, considerate and funny.

He's also thoughtful and can be very intense during discussions such as the one held this morning. "We must build and increase relationships, especially between more fundamentalist Taliban and those who live in mainstream communities that don't hold comparable views. We must believe that people can broaden their worldviews through human interaction.

In answer to Hakim's question, Nao Rozi imagined himself facing a Talib who had already decided to kill him. "I would ask, 'is there anyone in your life whom you love?' Then I would say, 'I have someone too.' Perhaps this would help humanize the situation."

Faiz, whose brother was killed before his eyes by a Hazara fighter, says we must try to understand the source of the Talib fighter's hatred and why they choose violent ways. If face to face with a Talib, he would ask the Talib why he is doing these things and try to show that they have many things in common. "If we always look through the lens of prejudice," Faiz adds, "we are just as bad as extremists. How then can we reform our own thinking, far less theirs?"

It seems to us that these are young people with "soft necks." Not one of them suggested killing or revenge as acceptable answers. All of them look for ways to recognize every person's humanity, and to choose effective ways to resolve their politicized animosities. They are far, far away from governments that choose the stiff-necked and abysmally failed methods of war.

They could easily become overwhelmed -- as so many ordinary people everywhere -- by their own apparent powerlessness -- their own potential irrelevance as little people of no import. They could seek out power by aligning in blind allegiance to one armed force or another. Despair and anger are tempting, and equally conventional are stiff-necked, responses. Instead our friends here choose to support one another, holding true to their vision of peace and holding forth the vision that they can at least change themselves, developing and widening relationships that strengthen their vision, and point the way toward the better world they long to build. If we're all spared the sword, here in Kabul, in America, and elsewhere, it will likely be this powerful vision, nurtured and upheld by ordinary youth, that has saved us.

Hakim (weeteckyoung@gmail.com) is a mentor for the Afghan Peace Volunteers in Kabul.

Kathy Kelly (kathy@vcnv.org) co-coordinates Voices for Creative Nonviolence and is presently a guest of the Afghan Peace Volunteers in Kabul.