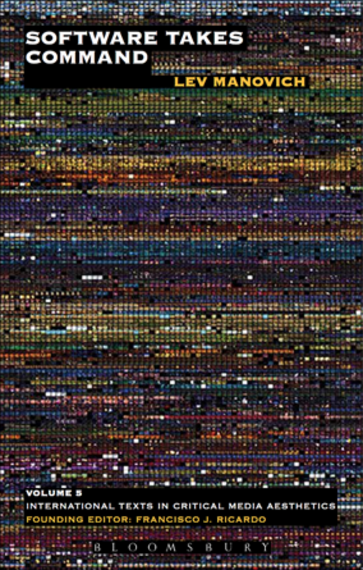 If men were able to be convinced that art is precise advance knowledge of how to cope with the psychic and social consequences of the next technology, would they all become artists?

Sixty years later, McLuhan's prediction has, in a sense, been fulfilled. Whether editing a video on YouTube, or applying a filter to a photo on Instagram, many of us have become daily producers/reproducers of cultural content, and it is technology that has made this possible. Few of us, however, know anything about the origins of this technology, or consider how it shapes our perception and experience.

Software Takes Command, a new book by Lev Manovich, offers a historical and theoretical account of this technology, focusing specifically on media software. Aimed at media practitioners rather than academics, it is a thought-provoking addition to software studies, a developing field of inquiry, which "investigates the role of software in contemporary culture, and the cultural and social forces that are shaping the development of software itself."

Manovich builds on ideas he developed in his seminal first book, The Language of New Media. Here, he showed how "avant-garde aesthetic strategies" of the 20th century, such as collage and abstraction, "became embedded in the commands and interface metaphors of computer software." In Software Takes Command, Manovich takes these arguments further, arguing that there is no such thing as "digital media," there is only software that is applied to digital content:

For users who only interact with media content through application software, the properties of digital media are defined by the particular software, as opposed to solely being contained in the actual content (i.e. inside digital files).

The shift to digital enables the development of media software -- but it does not constrain the directions in which it already evolved and continues to evolve."

At the same time, he suggests:

All these software mutations and new species of software techniques are deeply social -- they do not simply come from individual minds or from some essential properties of a digital computer or computer network. They come from software developed by groups of people, marketed to a large numbers of users and then constantly refined and expanded to stay competitive in relation to other products in the same market category.

This is a radical statement (were one to replace "social" with "corporate," it would be downright Orwellian) and one that is possibly true. Unfortunately, Manovich lets it stand as bare fact, without ever exploring the historical, social, economic and political underpinnings or ramifications.

This is a missed opportunity. Not only is Manovich one of the foremost theorists of new media, he is clearly aware of the broader implications of software as evidenced by the exchange below (moreover, he is one of the few theorists who is politically aware enough to employ "she" rather than "he" as a universal pronoun).

Szilak: In Software Takes Command, you state that in order to understand the "contemporary techniques of control, communication, representation, simulation, analysis, decision-making, memory, vision, writing and interaction," it is necessary to understand the software layer that "permeates all areas of contemporary society."

Do you think that software "hides in the open," shaping and delimiting communication and information in ways that most people never consider, because it is so pervasive, and because certain "species," to appropriate your evolutionary metaphor, already dominate? For instance, I am thinking of the use of big data and data fusion to analyze information. Is it possible to look at a body of data in a way that is technically "true" -- meaning the data is not overtly falsified, but actually "false," meaning the processing of data, because beyond the capabilities of human perception, can appear to be without social, political and economic motivation?

Manovich: Software does "hide" in a most direct way. The algorithms which control which updates from your friends you will see on Facebook, the algorithms behind Google Search, or the algorithm controlling your car GPS -- none of them are accessible. In the recent couple of years, media and academics started to discuss the politics of the few selected algorithms (such as Google search) -- but there are millions of other places where algorithms control things and we just take it for granted, because "things work."

Software also "hides" in a more indirect way. Even when the code is available, it can be too big to analyze it and discuss its "politics" in any meaningful way.

Last but not least -- as you said, software also "hides" because certain "species" (certain interface techniques and conventions) are completely taken for granted. They become naturalized, and then they become invisible to most people. So the goal of my new book is to expose these conventions (in relation to media authoring and access software such as Photoshop, After Effects or Google Earth), discuss their historical origins (the ideas which led to them) and scrutinize the details of their operations.

Manovich does an excellent job of providing his arguments with a solid historical framework. He begins by considering computer pioneer Alan Kay's vision of the computer as a "meta-medium" that both simulates the techniques of other media (such as painting and photography), as well as generate new forms of media. With his prototype "Dynabook " personal computer Kay hoped to offer users both an extendable library of media tools, as well as an easy programming environment in which users could modify or create tools. Manovich then goes on to show how theoretical concepts from the 1960s and 1970s, and features of early computer programs such as Sketchpad and SuperPaint, provided the basis for the development of contemporary media authoring software.

Manovich concedes that his book is not a comprehensive history, and, by choosing Kay, he is tracing a particular historical path. Indeed, Kay's belief in the liberating potential of the computer for individual creativity resonates throughout Software Takes Command. Had Manovich chosen to look at the military origins of the graphic user interface, (Kay's Dynabook work was funded by the Defense Department's Advance Research Projects Agency) a much different history and reading of media software may have emerged.

I asked Manovich about his rosy view of software:

Although he does not specifically mention software, Paul Virilio in Open Sky critiques a number of features that arise from its usage: the loss of cause and effect, the loss of historical memory in instantaneity, the loss of orientation in tele-presence. If I am reading Software Takes Command correctly, it doesn't seem that you share his dire view. What role does art have, if any, in critiquing the effects of software?

Virilio was a key influence on me when I was a student, because he showed how technology can be taken most seriously in thinking about culture (and in a different ways than McLuhan and Kittler, the other two tech theorists of the 20th century). But, I try to stay away from the very general statements about how software (or other technologies) changes our psyche, our understanding of the world, etc. Instead, I specifically focus on discussing particular effects which I can clearly see (such as new aesthetics in motion graphics) and details of software.

I feel that, in general, staying away from generalizations about technology effects is the better approach for today, when we are much more aware of the multiplicity of societies and subcultures, and how the same technologies are used very differently in the different places by different people. Think of all uses of Internet, from selling things and collecting data about consumers to organizing resistance and protests, to acting as the only publishing outlet for academics in many countries that do not have academic publishing houses. For example, in the 1990s, in a few East European countries, literature only survived because of the Internet, because previous state supported cultural platforms collapsed.

Unsuprisingly, Software Takes Command succeeds in providing thoughtful and detailed analysis of widely-used media software programs like Photoshop and After Effects. The fact that Manovich emphasizes the liberating aspects of media software over its normalizing and control aspects is not, in itself, problematic. However, it is also not the case that by focusing on "particular effects which [he] can clearly see (such as new aesthetics in motion graphics) and details of software," his arguments necessarily escape the value judgments inherent in a more philosophical approach.

You state: "Software simulation liberates media creation and interaction techniques from their respective hardware." While it is true that the limits of hardware -- physical media -- the viscosity of paint, the frame of film, the chemical process of photography -- are absent in software, I would argue that these limits have been replaced by a software menu which, like physical properties, proscribe the effects available to creative producers. Moreover, the reception of all media even electronic media is mediated by the hardware of the body, a fact which software, which is without materiality, elides. Could you comment?

True about the menus -- but one can also program media (using Processsing, Javascript, etc.), which opens more possibilities. The majority of outstanding interactive projects do involve custom programming, rather than just using menus. And you are right about the hardware of the body -- I don't have anything to add here.

Part 2 of my review of Software Takes Command and interview with author Lev Manovich will appear later this week.