Jack Algiere has no qualms about letting his kids eat their veggies straight out of the ground from the fields and greenhouses he manages in Pocantico Hills, N.Y.

He knows the rich, organic soil will provide Sedge and Ojiah with delicious, nutrient-rich food. Not to mention a possible boost to their immune systems.

His sons have their favorites. "Carrots are up there and consumed after a brush with the shirt sleeve. But spinach in winter seems to be the prize," said Algiere, the farm manager at Stone Barns Center For Food and Agriculture. "With most greens, they prefer to graze -- no hands -- rather than pick."

Perhaps most importantly, Algiere knows that toxic fertilizers and pesticides will not have touched the carrots or spinach, and therefore can't pose any risks to his sons' health.

"Thanks to our improved understanding of the dynamics of soil, the luster of chemical agriculture has worn off," Algiere said. He once worked farmland the conventional way, but said he has since learned that nature really does know best when it comes to warding off unwanted weeds and insects, and feeding a plant what it needs to thrive.

But despite the way Algiere manages Stone Barns, many people are acting as soil spoilers, according to a new documentary called "Symphony of the Soil." Our chemical dependencies are stripping soil of its life-giving duties and turning it into lifeless dirt, the film says. We've destroyed half the world's topsoil in the last 50 years, and a quarter of what's left is degraded. Experts in the film suggest that this loss is contributing to a range of today's ills: flooding, droughts, toxic algae blooms, contaminated drinking water, cancer, developmental problems, antibiotic-resistant infections, obesity and more.

"The connection between healthy soil and healthy people is so obvious," said Deborah Koons Garcia, director and producer of the film, which screened last weekend at Stone Barns.

So, when and how did we lose sight of such a vital relationship? And can we find it again?

Fred Kirschenmann, a distinguished fellow at the Leopold Center for Sustainable Agriculture at Iowa State University, pointed to his grandfather's generation: The first synthetic nitrogen fertilizers and pesticides emerged from the chemistry of weapons during the world wars, he said.

"[The chemicals] came as a saving grace," Kirschenmann, also board president at Stone Barns, says in the documentary. Greedy farming methods had already begun to increasingly outpace the land's natural production of nitrogen fertilizer, a delicate collaboration between plant, bacteria and other soil microorganisms.

Applying chemical fertilizer, Kirschenmann's grandfather and other farmers could enjoy record returns from their land -- at least for the short term. But it wasn't long before the new tactics triggered a downward spiral for their soil, their crops and the overall health of the nation, the film says.

Research suggests that the addition of synthetic fertilizer lowers a plant's natural defenses against pests. That increased vulnerability attracts more pests and can prompt a farmer to apply increasing amounts of insecticides and herbicides, which often kill beneficial insects and animals along with the intended targets. Over time, such use can lead to pesticide resistance and the need to apply even larger quantities or altogether different chemical concoctions. 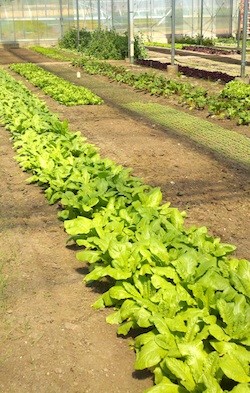 Growing a mix of crops keeps the soil happy.
Photo by Lynne Peeples

Meanwhile, synthetic fertilizers are also subject to the law of diminishing returns. More and more may be needed to help plants grow over time, which is especially true if only one type of plant is grown in a field. Without a diverse mix or rotation, the soil doesn't get a well-balanced, nourishing diet; Kirschenmann likened it to a person only eating French fries every day. What's more, these so-called monocultures are highly prone to pest outbreaks.

And the cycle continues.

"There's always something else. This is great for pesticide companies," Garcia said. "If you have healthy, alive soil, you don't need chemicals. Healthy soil exudes protection from bad guys."

More than 10,000 chemicals are currently registered for agricultural use in the U.S., Paul Hepperly, who was research director of the nonprofit Rodale Institute during filming, says in the documentary. And with the ongoing development of new pesticides and new genetically modified crops designed to withstand them -- one of the latest being 2,4-D-resistant corn -- it doesn't seem like farmers will stop applying the annual 1.1 billion pounds of pesticides.

When a chemical product is used, it is rarely confined to a farmer's fields.

Research suggests that less than half of the synthetic fertilizer is actually absorbed by crops. The excess may be released into the air as a potent greenhouse gas, or it may leak into the soil and water systems, potentially contaminating drinking water and contributing to toxic algae blooms. Pesticides find a similar fate.

In most cases, the health effects of these chemicals or mixtures of chemicals remain unknown. But science is slowly starting to catch up, as The Huffington Post has reported, and prenatal or early childhood exposures appear capable of causing everything from birth defects to cancer to infertility. New research suggests that even tiny amounts of a toxic chemical can prove harmful to a developing child.

A mixture of fertilizer and pesticide chemicals may be particularly dangerous -- and are often found together in waterways. As Warren Porter of the University of Wisconsin, Madison, explains in "Symphony of the Soil," nitrates from fertilizer can worsen the situation by shutting off the body's defenses to toxic chemicals.

"It's like tying your hands behind back," he said.

Even chemical-free operations can pose water woes. Poor soil can mean an increase in the frequency and intensity of both droughts and floods, even without changes in rainfall. (Of course, more extreme weather is predicted with climate change.)

"My prerogative is to protect the water system," said Stone Barns' Algiere, calling water the biggest public health concern for agriculture outside of production.

According to the U.S. Department of Agriculture, soil with a healthy amount of living matter, say 5 percent, can absorb about six times more water than soil containing only 1 percent of organic material. The living content of the soil at Stone Barns tends to fall between 5 and 6 percent.

If there is more absorption, then less soil -- as well as pesticides and fertilizers -- will run off the surface into waterways, and more freshwater will be able to restore aquifers. Further, if the soil soaks up a greater amount of water, it won't need as much additional water later to quench its thirst.

About 70 percent of the planet's fresh water is currently used for agriculture irrigation. And that resource is depleting at a rapid and unsustainable rate. The water level of the Ogallala aquifer in the Midwest, for example, has dropped by more than half in 50 years.

"We need to adjust agriculture to suit nature, not the other way around," Kirschenmann said in an interview with The Huffington Post. 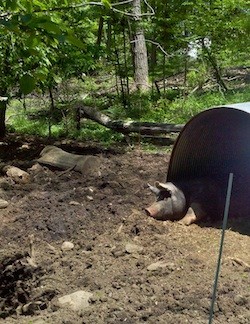 Past Stone Barns' row of greenhouses, and a few hundred feet down a wooded trail, lies a pair of pigs caked in dark mud under the shade of trees.

"These animals have a reason to be in the woods," Algiere said. "That is where they're from."

Letting the pigs roll around in their natural surroundings is benefiting the farm as well. "The pigs are digging up invasive species, opening up ground. These are things we never could do with a tractor," Algiere added.

For millennia, animals were a farm staple, pooping out fertilizer and feeding the soil. "When you take animals off the farm, you tend to get too much manure in one place," film director Garcia said, "so you end up with two problems: excess manure and a lack of fertility."

At the same time, having too many animals in one place can cause an array of other problems. Factory farms can become a breeding ground for infectious disease and antibiotic resistance.

"Whatever they're giving the animal is probably killing anything that would have killed that infestation," said Algiere, who uses no antibiotics and often lets his chickens freely roam sections of his fields. "It's all part of the same story." 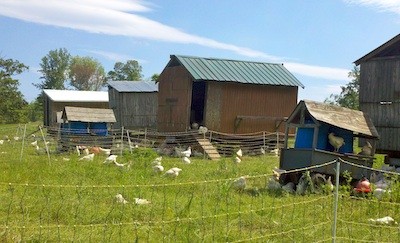 Free-range chicken: better for the soil, better for humans.
Photo by Lynne Peeples

Hepperly, of the Rodale Institute, suggests that story needs to be changed, perhaps by revising the 1960s-era notion that "chemistry was better than life forces" to one that "lets life live."

"We call this better living through biology," he says.