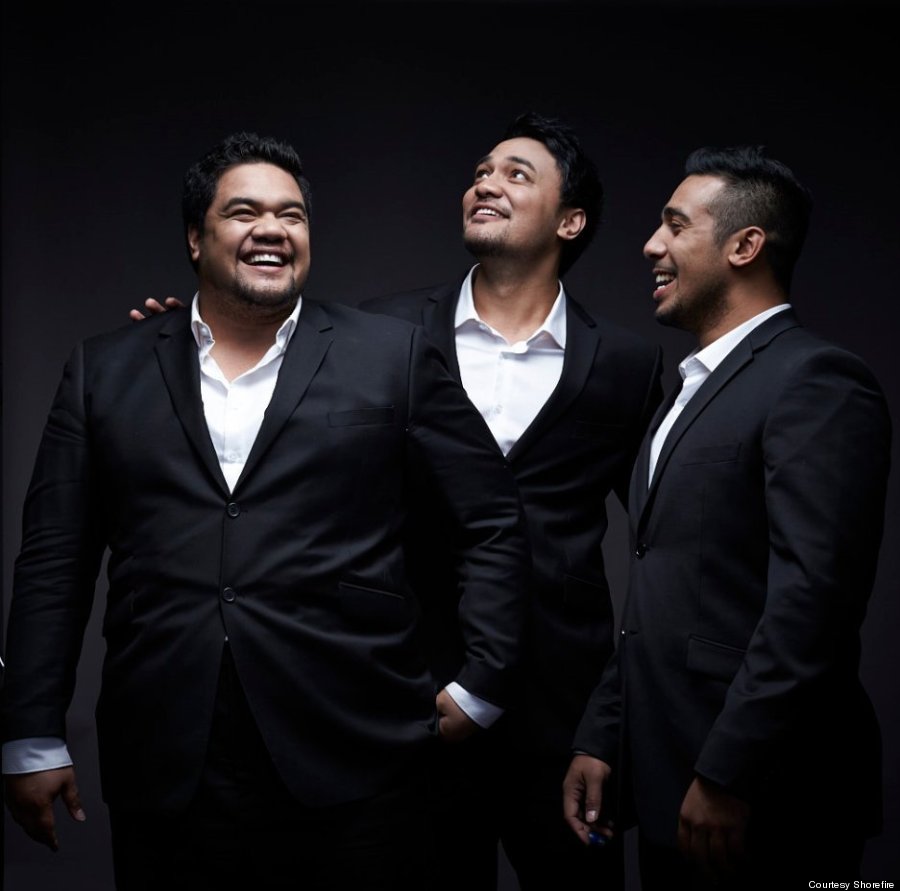 Lorde may be the greatest New Zealand musical export of 2013 (or of the century, let’s be real), but back home, she's got competition. The members of the improbably popular operatic trio Sol3 Mio -- pronounced So-lay Mee-oh, after the famous Neapolitan aria, "'O sole mio" -- buck all the current trends in the music industry: suit-attired belters of high notes, they’re classically trained and formally inclined, closer to The Three Tenors’ version of superstardom than Taylor Swift’s.

Made up of brothers Pene Pati, Amitai Pati, and the Patis’ baritone cousin Moses Mackay, the band has enjoyed a fairy-tale rise since the boys' early days singing at a nursing home run by Papa Pati in South Auckland. In 2013, their eponymously titled debut, "Sol3 Mio," outsold all other New Zealand albums within a mere month of its release (including Lorde's blockbuster entry, "Pure Heroine"). The same album held at number one on domestic sales charts for much of 2014, meaning only Ed Sheeran, budding British pop god and sometimes collaborator with Swift herself, sold more music to Kiwi audiences last year. The feat of hawking choral standards to the masses is made all the more incredible when you consider that the young men of Sol3 Mio are Pacific Islanders, part of a demographic that faces discrimination in New Zealand, and particularly within the classical world.

It’s a story that has “American dream” plastered all over it, and indeed, the trio are planning to unleash their legendary grins (they like to incorporate spontaneous physical comedy into their act) and masterful vocal chords onto the U.S. market shortly. Ahead of their spring stateside debut, HuffPost chatted with Pene about the band’s stratospheric ascent at home and what that popularity might mean for the rest of us.

HuffPost: Do you have any sense who your fans are? Elderly lovers of classical music? Tweens?

Pene Pati: That’s an interesting question. At first our demographic was mostly 50s and onward but we’ve started trying to branch out. At our last concert there was everyone from the very young -- four-year-olds -- right through to the very old.

HP: What’s been your strategy for branching out?

PP: I think the more we sing the more we get newcomers. The word is spreading. Of course, we get a lot of the hardcore opera goers, but at the same time people are saying, 'These aren’t your stereotypical guys singing opera.' That’s the beauty of not only trying to preach to the converted.

HP: In interviews, you’ve talked about being dismissed as “lazy” Pacific Islanders. Can you elaborate on the specific discrimination you -- and other Samoan artists -- face?

PP: In Auckland, especially in my hometown of South Auckland, the stereotypical image for Pacific Islanders is that they’re more inclined to doing R&B and hip hop. At the same time, when you’re in school, there’s that stereotypical image of being lazy. That we always go by our own time, P.I. time, that sort of thing. That’s kind of why I wanted to do operas. I knew deep down that stereotypes are just hearsay and I wanted to prove all of that wrong.

HP: You’ve also talked to the Samoan press about discouragement from within your community. There was a Maori mentor who suggested your career would be seen as an embarrassment…

PP: That really hurt my heart. It took a long time -- a long time -- to take that in. I don’t understand it. Maybe it’s jealousy, or something else, the crab effect in the Pacific Islander community where one person starts to succeed and the rest try to drag you down.

HP: Is that a common attitude?

PP: It’s not exactly an outlier and not exactly common either. You get a lot of Pacific Islanders giving you praise. At the same time, you get a few that say, ‘Why are you doing this?’

HP: How did you become initiated in opera?

PP: My dad made us sing as little kids. He kind of formed the Von Trapp family out of us. He used to run an elderly home for years, and we sang every Friday from when I was six to about 19. We sang all the hymns, all the show tunes, from Frank Sinatra to everything. It wasn’t until we got to high school that a teacher was like, ‘You guys can sing. How about you join the choir?’ We developed this love for the discipline of it. Choral music has all these rich harmonies. There was something distinguished about it that I really love.

HP: How do you explain your popular success?

PP: I feel like we’ve hit the right genre at the right time. I personally believe the world wants something new. The last trio who successfully became commercially popular -- and I’m not comparing us to them -- were The Three Tenors, and that was a long time ago.

HP: Have you felt any pressure to do covers of pop songs?

PP: We’re fortunate enough that the label [Saiko Management, who also represents Lorde] is really on our side, and really pushed to say that we are opera singers. We don’t want to lose that for the sake of being commercialized.

HP: What about your live performances? Where did you get the idea to weave comedy into the songs?

PP: It’s kind of just us being ourselves. It’s not rehearsed at all. I think that’s why people find the concerts so refreshing. They feel like it’s us having a laugh rather than us trying to make them laugh. That’s the beauty of working with family. It’s easy to mock each other.

HP: Your debut album is set to release in the U.S. this April. Do you plan on eventually writing your own work?

PP: We do have originals, but we’re trying to time it right, to slowly implement those songs into a second album. For now we’re sticking with those songs people love.