The sun sustains life on Earth, and maybe that's not all it does. Provocative new research by scientists in Norway suggests there may be a link between solar activity at the time of your birth and how long you're likely to live.

Specifically, the scientists found that the life spans of people born during a so-called "solar maximum" period--when the sun displays the greatest number of sunspots and solar flares in any given solar cycle--are about five years shorter than those of people born in a solar minimum period, when the sun is less active.

For their research, scientists at the Norwegian University of Science and Technology in Trondheim looked at the age of death of individuals born in Norway between 1676 and 1878 and compared the data to solar activity data. In addition to showing that individuals born during a solar max tended to die younger, the comparison showed that fertility was reduced in certain women born in years with high solar activity.

"We were surprised of the effect on lifetime number of offspring, although only detectable in the low-[economic] status women group," study co-author Dr. Frode Fossøy, a researcher at the university, told The Huffington Post in an email.

What explains the weird connection between solar activity and human fertility and longevity?

It seems that ultraviolet light from the sun--especially at times of high activity--can suppress certain molecular and cellular mechanisms in the body, Gine Roll Skjærvø, a senior engineer at the university and the lead author of a paper describing the research, told The Telegraph. 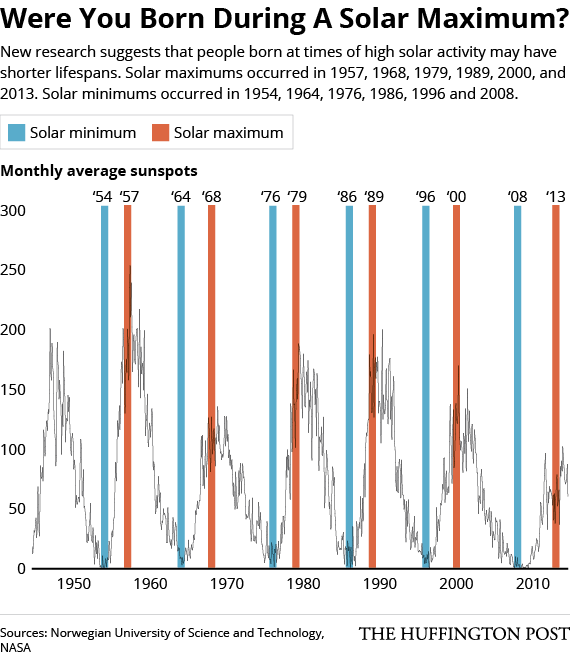 The new research stands in contrast to a 2009 study showing that solar activity does not affect human life spans. But that study relied on population-based data rather than on data from specific individuals.

"Moreover, their populations were located further south than our study populations," Fossøy said in the email. "These differences could explain the discrepancy between the two studies."

Dr. Mark Lucock, a nutritional geneticist at the University of Newcastle in Australia, who was not involved in either study, called the new research "a fascinating piece of work that provides further supporting evidence that early-life environmental factors help shape [human traits] in ways that have long-term consequences," Live Science reported.

The new research was published online in Proceedings of the Royal Society B on January 7, 2015.