GENEVA (AP) — Wintry skies darkened over Switzerland on Tuesday morning, but Romanians were treated to a pinkish ethereal light and Swedes to a beautiful sunrise, as a partial solar eclipse that began over the Mideast extended across much of Europe.

In Switzerland, the pall of clouds and light snow seemed like dusk with lights twinkling in cities – time in reverse just as people streamed off trains and buses to arrive at work. The solar occurrence was at its height over Geneva, Bern and other Swiss cities in the midmorning, then the grayness at the lower altitudes began to brighten a bit.

As much as two-thirds of the sun slipped from view behind the moon, something that hasn't occurred in Switzerland since August 1999. A more minor eclipse happened in August 2008.

The Swiss federal health office warned people, especially children, to wear special eye protection rather than use homemade gear to see the eclipse.

Clear skies over southern Romania offered a chance to glimpse a pale pink, otherworldly glow that spread over Bucharest, the capital. People climbed atop snow-coated high-rise buildings to get a better view, or donned sunglasses and huddled outside subway stations in Revolution Square. Some watched it televised live; Romanians won't see their next eclipse until March 2015.

"This morning I saw a strange light," said Andrei Carlescu, a 21-year-old architecture student who was fascinated by the way the light dipped. "At first I didn't know what was happening. There were children about 9 or 10 who were wearing special glasses and looking at it."

The eclipse was first seen Tuesday over Jerusalem, where the sun appeared to have taken a large bit out of its upper right section.

A solar eclipse happens when the moon lines up between the sun and the Earth, casting a lunar shadow on the Earth's surface and obscuring the solar disk. During a partial solar eclipse, only part of the sun is blotted out.

Western Europe woke up to a sunrise eclipse. Astronomers expected the greatest eclipse over Sweden, where about 85 percent of the sun will be blocked.

"It's thanks to the position of the moon and so the shadow (of it) is very small," said Niclas Henricson, head of the Tycho Brahe observatory in southern Sweden.

Ten people had gathered at Henricson's observatory ready to check it out with their mobile telescopes should the cloudy weather disperse. He said Swedes only have such an opportunity about once every 45 years; their next full solar eclipse will be in 2126.

Rather than miss out, Christian Ander, a 31-year-old IT entrepreneur, went to a park to watch it, though he said that because it occurred so early in the morning, it wasn't as noticeable as it might have been if it had happened later in the day.

"It was beautiful," he said. "It was kind of like a sunrise."

Polish viewers were treated to live television coverage of the eclipse from the southern city of Krakow, where the shadow of the moon could be seen gradually blotting out the sun.

The golden croissant-like shape was visible in the dark sky in the morning. However, most of Poland was covered by clouds that blotted out the spectacular sight.

A sunset eclipse will be visible from central Russia, Kazakhstan, Mongolia and northwest China.

AP writers Monika Scislowska in Warsaw, Louise Nordstrom and Malin Rising in Stockholm and Alison Mutler in Bucharest contributed to this report. 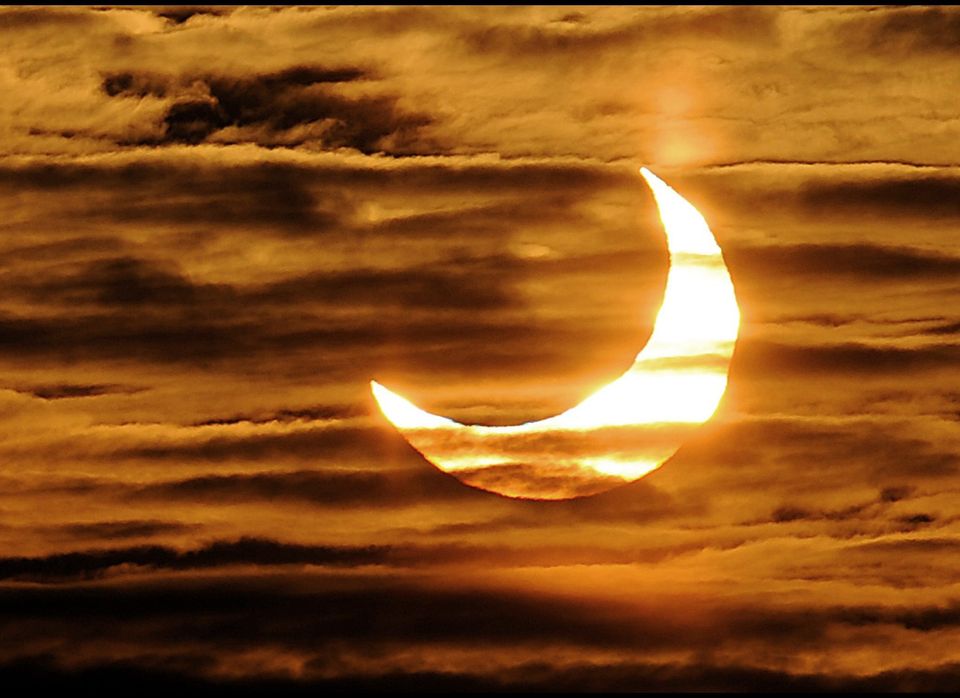 1 / 20
A picture taken on January 04, 2011 in Locon, northern France, shows the world's first partial solar eclipse of 2011. A solar eclipse happens when the Moon swings between the Earth and the Sun. AFP PHOTO PHILIPPE HUGUEN (Photo credit should read PHILIPPE HUGUEN/AFP/Getty Images)
Getty