If you catch a glimpse of this fiery phenomenon, be sure to tweet us your photos at @HuffPostScience, hashtag #solareclipse, or you can email us at science@huffingtonpost.com. We'll be collecting user photos from all over, and yours may be featured!

Just two weeks after the huge "supermoon" wowed skywatchers around the world, the heavens will offer up another observing treat — a solar eclipse on May 20 that should be visible from much of western North America.

The May 20 event is what's known as an annular solar eclipse, in which the moon blocks out most of the sun but leaves a ring of light visible around its circumference.

It should be quite a spectacular sight for favorably placed — and appropriately careful —skywatchers throughout Asia, the Pacific region and parts of North America.

As the moon revolves aroundEarth, it passes between our planet and the sun once every 29.5 days. Most of the time,the moon zips either above or below the sun, and no eclipse occurs. [Video: How to View the May 20 Solar Eclipse]

But if the moon is close to one of its orbitalnodes— the points where the orbits of Earth and the moon cross — the moon will pass directly in front of the sun and block its light. If the moon is also close to apogee,the point that marks its farthest distance from the Earth, it will not completely cover the sun, and we get an annular eclipse.

"Annular" comes from the Latin word annulus (ring) and refers to the fact that a ring of sun shines all around the moon.

On May 5, we had a so-called"supermoon,"the largest and brightest full moon of 2012. The ful moon was nearly atperigee — as close to Earth as it can get — and it looked huge in the sky as a result.

Two weeks later, on May 19, the moon will have traversed half its orbit and arrived at apogee. When the eclipse occurs a few hours later, the moon will be too small in the sky to cover the sun totally, resulting in an annular eclipse, or "ring of fire."

Annular eclipses are sometimes said to be less interesting than total solar eclipses, in which the moon completelycovers the sun, because we don’t get to see the sun’s prominences and corona. But they are still beautiful and awe-inspiring events, and well worth trying to observe. [Must-See Skywatching Events in May 2012]

The May 20 annular eclipse: How to watch

Like most solar eclipses, this one will be best observed from the narrow band on Earth’s surface where the shadow of the moon falls.

This path begins at dawn in southern China. It then sweeps across the Pacific Ocean, passing south of Alaska, and makes landfall on the Pacific coast near the California-Oregon border. It ends near Lubbock, Texas, at sunset. Partial phases of this eclipse will be visible over most of western North America.

The eclipse will appear at different times in different locations. The table below givesthe predicted times for the events for selected locations in North America. 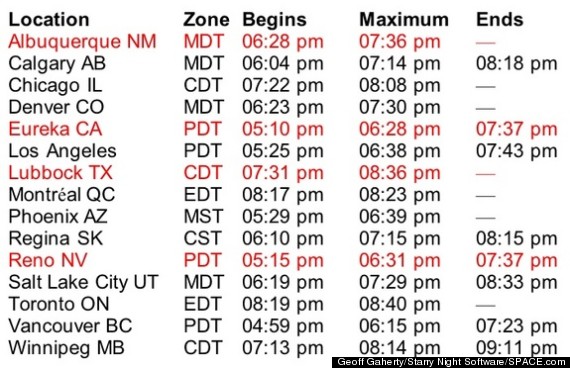 In North America, the eclipse will occur late in the day, so it’s important to observe from a site with a good western horizon.

The biggest wild card in observing is the weather. In case of inclement weather, you should be prepared to travel; the Clear Sky Chart offers a useful guide of where to go: http://cleardarksky.com/csk/. Start with the clear sky area closest to your chosen location. If it shows poor weather prospects, check the clocks farther away, within a radius or 60 or 120 miles (100 or 200 kilometers). If you can see a clear patch, hop in your car and drive!

Because the eclipse will occur just a month ahead of the summer solstice, the sun will be setting quite far north of due east. Check the sun’s setting point a day or two beforehand to verify that trees or buildings do not block your view.

Warning: Never look directly at the sun, either with the naked eye or through telescopes or binoculars without the proper filters. Doing so could result in permanent and serious eye damage, including blindness.

To safely observe the annular eclipse, you can buy special solar filters to fit over your equipment, or No. 14 welder's glass to wear over your eyes. No. 14 is denser than the standard No. 12 available in hardware stores and can be purchased only at specialized welders' supply stores.

You can also buy "solar shades," special glasses widely available from telescope stores before eclipses. Do NOT use standard sunglasses or any kind of homemade sun-shading contraption.

The safest and simplest technique is perhaps to watch the eclipse indirectly with the solar projection method. Use your telescope, or one side of your binoculars, to project a magnified image of the sun’s disk onto a shaded white piece of cardboard.

The image on the cardboard will be safe to view and photograph. But make sure to cover the telescope's finder scope or the unused half of the binoculars, and don't let anybody look through them.

If you do get the proper filter, you can take some impressive photos of the eclipse with almost any camera through your telescope or binoculars because the sun’s image through the filter is still quite bright. A camera adapter will ensure a firm connection between camera and telescope.

What to Look For

It will be interesting to compare your own times of the four contacts with the predicted times above. First contact is usually observed a little late, because you can’t actually see the moon on the sun’s disk until the exact time of first contact is past. Fourth contact occurs when the disk of the moon finally leaves the sun.

As the moon moves across the face of the sun, it may pass close to sunspots or other surface features on the sun, creating interesting photo opportunities. The view of the sun through a telescope with a hydrogen alpha filter, such as the Coronado PST, will be very dramatic, and contact times may differ significantly from times obtained with normal white light filters because we’re looking at a different layer in the sun’s atmosphere.

One of the nicest things about annular eclipses is that they take a long time to happen, so there’s plenty of opportunity for "sidewalk astronomy"—sharing the view through your telescope with the public. It might be worth setting your telescope up in a public place, such as a park or a mall parking lot, and inviting passers-by to have a look.

Who knows?You may spark the interest of a new amateur astronomer. If you snap any great eclipse photos and want them to be considered for use in a story or gallery, send them to SPACE.com managing editor Tariq Malik at tmalik@space.com.