America's energy use poses threats to national security on numerous fronts. Aging transmission systems coupled with an increasingly computerized grid have left our country vulnerable to a crippling attack on our energy infrastructure. The Department of Defense is the largest energy consumer in the world and is hemorrhaging money on electricity and oil expenditures. Overseas, reliance on fuel is deadly and costly for military operations. And of course, there's climate change, which poses numerous security threats to Americans. Solar energy offers a remedy for each of these monumental security risks. 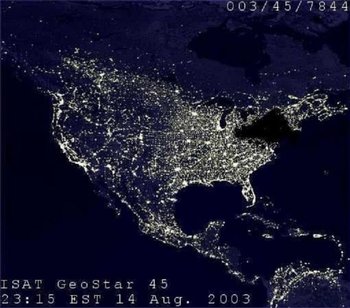 Risks to the energy grid threaten both the military and civilians. Our nationwide energy system relies on aging transmission infrastructure and increasingly vulnerable computerized systems.

Over the last decade, utility companies have begun automating tasks in order to cut costs. While automated systems increase efficiency, they also pose risks for cyber attacks, as it is possible to manipulate energy systems through computer networks. Implementing these automated technologies is cheap, but incorporating cybersecurity measures is more expensive, and most companies have failed to do so.

This leaves the grid vulnerable to terrorist groups who can hack into energy systems in order to disrupt or shut down parts of the power grid. Actually, this is already happening. Utilities report that grids are attacked on an everyday basis -- some face thousands of attacks per month. With a national energy grid valued at over $1 trillion, these attacks already cost the economy billions of dollars every year.

And the worst may be yet to come. A declassified report from the National Academy of Sciences indicates that a cyber attack could knock out power to entire regions of the country for months. Such an attack could easily dwarf the outage in 2003, where sagging power lines in Ohio left 50 million people without power, cost $6 billion, and killed 11 people.

What's especially worrying is that 31 of the D.O.D.'s 34 most important assets are completely reliant on outside commercial energy for power. Secretary of Defense Leon Panetta has warned that cyber attacks will be the number one threat to American security in coming years, and worries about "a cyber Pearl Harbor."

Solar energy has been identified as a potential solution to the cyber-security threat. It's far more difficult to attack millions of distributed solar installations than it is to target centralized transmission infrastructure. Jon Wellinghoff, Chairman of the U.S. Federal Energy Regulatory Commission, has said:

It wouldn't take that much to take the bulk of the power system down. If you took down the transformers and the substations so they're out permanently, we could be out for a long, long time. A more distributed system is much more resilient, millions of distributed generators can't be taken down at once.

The Military and Renewable Energy

The Department of Defense is the largest energy consumer in the world. In the 2012, they spent $20 billion on energy and consumed over five billion gallons of oil -- accounting for 80 percent of the federal government's energy consumption.

In response, the military has set ambitious targets for transitioning to renewable energy. D.O.D. mandate title 10 USC 2911 requires that 25 percent of total energy consumption must come from renewables by 2025. Of these planned additions over 50 percent are expected to be solar PV. Already the D.O.D. has installed enough solar energy to power 22,000 American homes.

Cost isn't the only consideration in the D.O.D.'s renewable goals. Current energy infrastructure causes numerous security risks and vulnerabilities. Aging transmission infrastructure and risks to the energy grid could threaten military bases with blackouts from storms or terrorist cyber attacks. It also means that our military is dependent on volatile foreign oil markets.

Several secretaries of defense, Chairmen of the Joint Chiefs, and secretaries of the Army, Navy and Air Force have all warned that America's dependence on oil is a serious threat to our national security.

The United States imports 4 million barrels of oil every day from unstable countries. Most of the money we pay for this oil ends up in the hands of elites and is rarely distributed, exacerbating resource disparities and further destabilizing countries.

For the D.O.D., clean energy isn't just an environmental issue, it's an issue of efficiency and national security. As Michael Breen, the executive director of the Truman National Security Project puts it, "the U.S. military does not do politics -- it identifies threats based on evidence and acts to protect the nation." 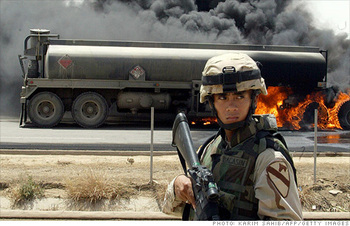 After a decade of troop deployment in remote regions of the Middle East, the U.S. Military learned that energy production in the field is a crucial tactical issue.

A study considering Army convoys in Iraq from 2003 to 2007 found that one of every eight U.S. casualties was the result of protecting fuel convoys. Another study found that one soldier dies for every 24 fuel convoys sent to bases in the Middle East.

Beyond casualties, getting fuel to deployed troops is terribly expensive. While the cost for a gallon of gas in California is around $4.00, the cost to get that gallon to troops in the Middle East is 100 times that. And military operations need a lot of gas- a typical deployment in Afghanistan burned through 20 gallons per day of gasoline (or around $8,000).

In response, the military has begun utilizing portable solar arrays to power bases in these remote locations. They also use smaller arrays to power GPS and other equipment on the battlefield -- arrays that are far lighter and less restrictive than current batteries.

These portable arrays make deployments more nimble and effective in carrying out their missions as they are less reliant on fuel shipments. 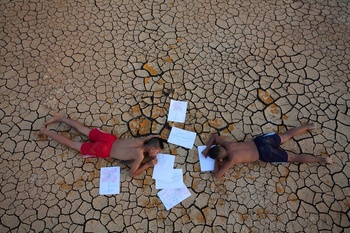 And we haven't even talked about climate change yet.

In 2010 the Pentagon began to include climate change in its Quadrennial Defense Review. Former National Security Adviser Tom Donilon has warned that climate change is "not just a transcendent challenge for the world, but a present-day national security threat to the United States."

Climate change threatens to cause massive international instability that would overwhelm the aforementioned security threats. Climate change exacerbates already precarious resource shortages and extreme weather events. Droughts like the one that threatened 12 million people in the Horn of Africa in 2011 or floods like those that displaced 30 million people in South Asia in 2007 will become increasingly common and more severe.

These catastrophes are tragic for millions of people, and they are also geopolitically destabilizing. When millions of people are displaced, they either need to be internally relocated, live in refugee camps, or move somewhere else. The United States and other developed countries will feel increasing immigration pressure as more displaced people with nowhere else to go vie for entry.

International conflict will also heighten. Severe weather events often stretch governments beyond their capacities. Terrorists prey on populations in the wake of severe disasters -- the Taliban reportedly recruited 50,000 new members in the wake of flooding in Pakistan in 2010. Countries and armed groups will also increasingly fight for diminishing water resources. The American military will be pressured to deal with these crises, especially when they threaten our allies.