In my two years as the director of the Energy Department's Solar Energy Technologies Program, I have often been accused of being an eternal optimist. I see our nation's energy challenges as an incredible opportunity -- one that has the potential to revolutionize our economy, environment, and national security.

That's why, back in 2010, we established the SunShot Initiative to decrease the total installed price of solar energy by 75 percent by 2020. We took our inspiration from President Kennedy's 1962 "moon shot" speech that set the country on a path to regain the lead in the space race and land a man on the moon. Many thought a manned lunar mission was beyond NASA's capabilities, but this bold move ultimately united the country when it proved successful.

There were plenty of naysayers when we launched the SunShot Initiative -- even within the industry -- who said that subsidy-free, cost-competitive solar couldn't happen in this decade. But we didn't listen to them. And now -- as the price of solar panels decreases and America's solar energy industry explodes -- many of those same naysayers are changing their tune.

Since we set out on this audacious journey, photovoltaic module costs have been cut in half. While we still have another factor of two to go before we reach a tipping point, we're finding that, in some markets, cost-competitive solar is already a reality.

To continue to set a path forward, we recently held the SunShot Grand Challenge Summit in Denver, Colorado. The event brought together more than 700 of the brightest minds in solar to discuss how far we've come and what challenges lie ahead.

The challenges are many. How can we streamline and standardize solar permitting processes? What can we do to get the financial community to embrace innovative technologies that have not yet been tested over long periods of time? How will our infrastructure handle high levels of variable solar energy inputs? Certainly, these are difficult issues, but they are not insurmountable.

Just consider -- back in the 1960s the first commercially available solar cells cost $400 per watt. By the end of 2010, prices for the state-of-the-art installed PV systems were about $3 per watt at the utility scale. And today, bids for large-scale plants are in the range of $1.20 per watt.

As we continue to push for innovation to drive down the cost of solar, it's much easier to imagine a day in the near future when we will reach $1 per watt for a fully installed solar energy system. If I've learned anything during my term as SunShot Director, it is that the seemingly impossible will one day be possible. 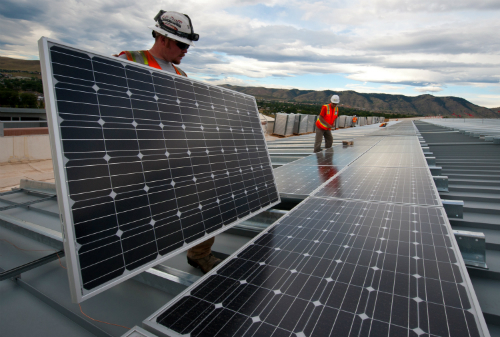 Ramamoorthy Ramesh is the director of the SunShot Initiative and Solar Energy Technologies Program. He graduated from the University of California, Berkeley, with a Ph. D. in 1987. He then returned to Berkeley in 2004 and is currently the Plato Malozemoff Chair Professor in Materials Science and Physics. Previously, he was a distinguished university professor at the University of Maryland College Park.