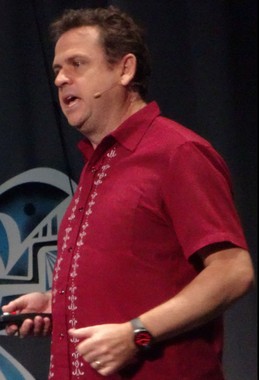 Like solar panels, lithium-ion batteries are also on a steeply declining cost curve, and in conjunction with cell phones, have already disrupted the telephone industry. Kennedy predicted that they will also disrupt the automotive industry by largely replacing internal combustion engines for cars and light trucks.

America has installed more than a million solar roofs, and solar panels produce one percent of U.S. electricity, Kennedy said. Although that may not seem like much compared with the 33 percent still produced from coal power, or the nearly 20 percent produced by the nuclear industry, Kennedy pointed out that the solar industry has increased its manufacturing volume sevenfold in the past 15 years.

On average, each doubling has reduced costs by 20 percent, Kennedy stated. If manufacturing volume continues expanding at the same rate for another 15 years--something Kennedy doesn't see as plausible--then 100 percent of the country's power would be produced by solar at that point, he noted.

Given the environmental benefits of solar over fossil fuels, "it's madness to burn buried sunlight instead of taking it fresh from the source every day," Kennedy told the audience.

Hochschild reminded the audience that California is now legally committed to get half its electricity from renewable power sources by 2030. "Ultimately, the state and world are going to go to 100 percent renewable energy," he predicted, But it won't be enough to halt environmental damage from energy use. "We're going to have to go beyond stopping doing harm to [restoring] what was broken."

Like Hochschild, Kennedy acknowledged the state's official 50 percent renewable power target for 2030, but predicted that, "California will probably be 70 percent renewable electricity by 2030." As the managing director of the new nonprofit California Clean Energy Fund, he is in a position to help support that growth.

Pivoting to international renewable energy development, Kennedy said that coal use in China will peak next year as China continues to ramping up the installation of wind and solar power plants. "China's doing more solar this year than was installed on Earth until 2012," he observed.

Kennedy also pointed out that the solar power industry accounts for more employment than the coal industry or the oil and gas industry in the U.S. The solar industry now provides 208,000 jobs nationwide. By contrast, the coal industry, including railroad workers operating trains hauling coal, only provides 133,000 jobs.

Even as it is setting a global example as a pioneer of economy-wide energy efficiency policies and an ambitious goal-setter in renewable energy, California is the fifth largest economy in the world and has built some of the world's largest businesses, notably Google, Facebook, and Twitter.

Thus, far from handicapping California's economy, the renewable energy industry has been good for the state, creating new companies, like Sungevity, as well as a growing supply of new jobs. Powerhouse, an Oakland, CA based solar energy business incubator and accelerator that Kennedy started, is flourishing and spurring further solar industry innovation and growth.

While the solar industry's progress has encouraged those concerned about climate change, Kennedy clearly believes that the clean energy revolution isn't happening fast enough to halt it. "We need to get to 1.5 to stay alive," he observed, referring to the global goal--now unlikely to be met--of holding the world's average temperature gain to a maximum of 1.5°C.