A full moon isn't the only celestial phenomenon on tap for this Friday the 13th.

The National Oceanic and Atmospheric Administration warned Wednesday that solar flares could send a "shockwave" to Earth on June 13 and briefly disrupt communications.

Three powerful, X-class solar flares erupted from the sun this week. NASA's Solar Dynamics Observatory data indicate that an X2.2 flare and an X1.5 flare occurred on June 10, followed by an X1.0 flare on June 11. (X1 through X10 is the designation for the strongest class of solar flares, with X1 being the weakest in the group.)

Solar flares sometimes produce waves of plasma and charged particles, called coronal mass ejections, that take up to three days to reach Earth. Based on the strength of the new solar flares, which caused scattered communication blackouts on Tuesday and Wednesday, researchers say that a shockwave could hit Earth on Friday. The wave may spark a minor geomagnetic storm and further disrupt communications.

"[A] glancing blow to Earth from this event is expected on June 13 but only an outside chance of at most G1 (minor) geomagnetic storming is forecast," according to NOAA. 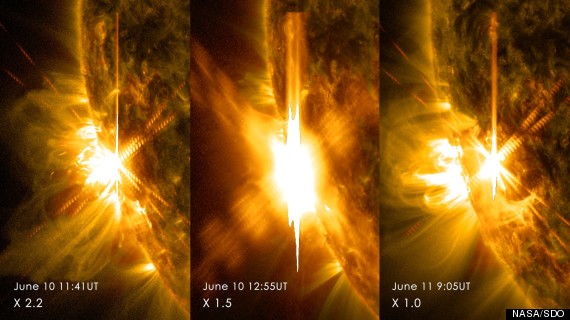 Three X-class flares erupted from the left side of the sun on June 10 and 11. (Image credit: NASA/SDO)

The latest flares follow a rise in solar activity that has cropped up in recent months. The largest flare of the year so far -- rated X4.9 -- occurred in February. Another X1.3-class flare also triggered radio blackouts on Earth in April.

Researchers had expected the sun's period of peak activity -- called the solar maximum -- to arrive in 2013. But minimal solar activity last year led scientists to label the period one of the weakest in the last century, and to wonder whether the maximum had actually begun.

Now, it seems the sun is finally entering the active stage of its 11-year weather cycle.

"It's back," Dean Pesnell of the Goddard Space Flight Center, said in a statement this week. "Solar Max has arrived."