As the once far-fetched idea of "solar roadways" gains a huge convoy of supporters--from the US Department of Transportation to Google to the Times of India to even Fox News -- a new video aimed at the millennial generation is set to go viral again, according to clean energy advocates.

This just might be the most inspiring, riveting and definitive roadmap for clean energy independence -- Solar Freakin' Roadways:

Many of us learned about the visionary energy inventors Julie and Scott Brusaw and their Solar Roadways in 2010, thanks to the first viral video by filmmakers Ben and Julie Evans and Mark Dixon, who broke the story on the Brusaws in their award-winning film, YERT--Your Environmental Road Trip.

"We first discovered Solar Roadways on the YERT trip in 2007 when Scott and Julie were just getting started -- in fact, Scott called us the 'guinea pigs' for his original powerpoint presentation about it -- and the idea completely blew our minds," said Ben Evans, director of the film YERT: Your Environmental Road Trip. 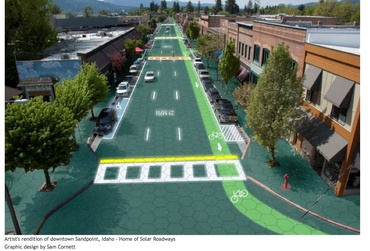 "What they were working to invent was so outside the box and seemingly impossible that Mark (Dixon, producer of YERT) and I thought Scott might just be some crazy dude living in the woods. Well he does live in the woods, but he's perfectly sane, really smart, and as nice and down-to-earth as you can imagine. We uploaded the first Solar Roadways video in late-2007 which got a little traction, and then an updated video about the first major prototype in mid-2010, an adapted version of which was included in our feature-length eco-docu-comedy which came out the following year. That second video really 'broke the story' in a way -- the idea completely captured people's imagination and the video went viral on YouTube. Boom! We'd never experienced anything quite like it -- Mark and I started getting emails from people literally all over the world with ideas or suggestions or requests to have Solar Roadways in their city -- and of course we'd forward all of those emails to Scott and Julie, since it's their baby. But it's been really cool to help get this idea out into the world and to be some part of enabling the Solar Roadways phenomenon."

Check out one of the original YERT interviews with the Brusaws:

"Of all the incredible environmental solutions highlighted in our feature film, it's one of the ones that resonates the most with people. Now with their newly-installed working prototype and their Indiegogo campaign to seed the manufacturing process, Solar Roadways really has a chance to become a reality in the near future. That's just incredible -- but it can't happen without the support of people who care. Scott and Julie are doing all they can to keep this 'of, by, and for the people' by crowd-funding it as much as possible, so supporting their Indiegogo campaign is crucial. I think this hilarious new video by Michael Naphan, which includes clips from the YERT film, really brings home for a new audience what Solar Roadways is and why we need it. I hope it helps the mission!"