With the solstice behind us, summer has officially begun. Across the country, that means the sun is shining and the mercury is climbing, and our air conditioners and the electricity grids they rely upon are stretched to their limits.

In response, we've seen utilities urge customers to turn up their thermostats a notch or two to ease their burden. They've recommended the use of fans, energy-efficient bulbs, and double-paned windows--all good measures to reduce energy use.

What we haven't seen is much action by the utilities to encourage people to go solar. In fact, in state after state, by proposing to increase fees for solar customers or lower their reimbursement rates, utilities are doing the opposite.

That's a shame, because a new Environment America Research & Policy Center report shows that when people put solar panels on their rooftops and in their neighborhoods through programs like net-metering, they reduce the strain on our electric grid, lower prices for all electric customers, and cut pollution to boot.

Net metering programs credit solar panel owners at a fixed rate -- often the retail price of electricity -- for providing excess power to the grid, similar to rollover minutes on a cell phone plan. These programs are the law of the land in 44 states, and have helped solar energy skyrocket across the country; last year, every two and half minutes, another U.S. home or business went solar.

As this chart details, of the 11 net metering studies reviewed, eight found that the value of solar energy was higher than the average local residential retail electricity rate; the three that didn't were conducted by utilities. 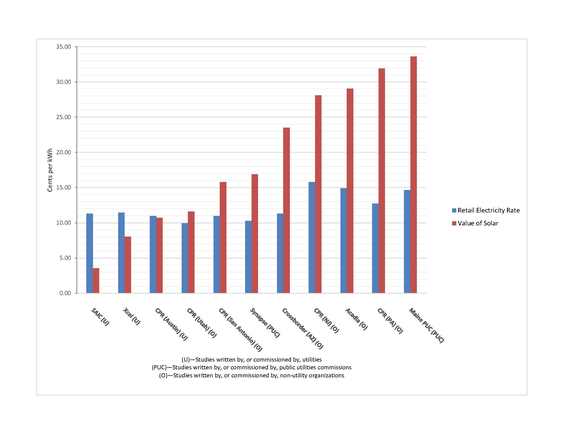 The median value of solar power across all of the studies was nearly 17 cents per unit, compared to the nation's average retail electricity rate of about 12 cents.

In other words, despite utility claims that solar costs too much, and that solar users are benefiting at the expense of other customers, the opposite is more likely true. Solar panel owners are givers, not takers.

Every single one of the studies -- even those conducted by the utilities -- found that solar customers offer net benefits to the electric system, as this chart shows. 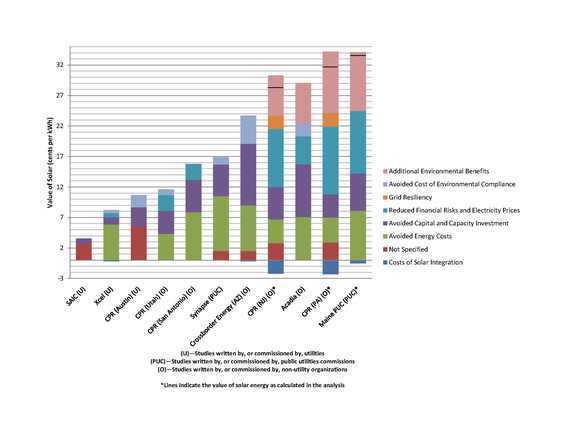 What's more, solar power boosts the local economy, producing local jobs that can't be outsourced. And as everyone knows, solar helps cut our dependence on dirty sources of energy and the global warming and air pollution that comes with it.

This study has real implications right now for debates raging across the country over net metering and other rooftop solar programs. Nevada, for example, is considering a new fee for solar panel owners who sell excess power. Arizona Public Service is proposing to lower the reimbursement rates for solar power. The Wisconsin Public Utility Board has approved a similar plan to lower payments to solar customers, which advocates are appealing.

As these battles unfold across the country, decision makers should take into account the report's findings, which reinforce what advocates have long argued: solar power has far more rewards than costs. Instead of penalizing its use, we should be encouraging it, right alongside programmable thermostats and double-paned windows.