What do Superman and the Ford C-MAX Solar Energi concept car have in common? Both receive power from the sun.

Set to be unveiled at next week’s Consumer Electronics Show in Las Vegas, the C-MAX Solar Energi provides new hope for car owners looking to get off of the electric grid. 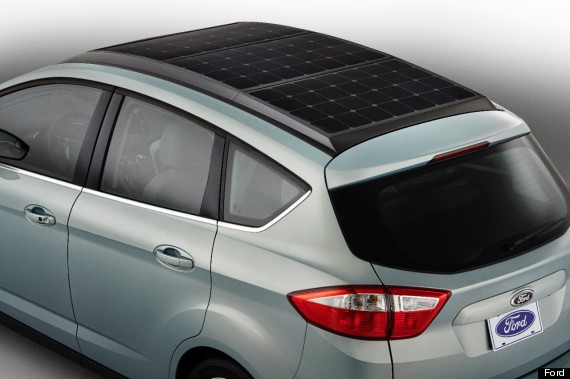 Like the C-MAX Energi on which the concept car is based, the C-MAX Solar Energi uses a plug-in hybrid system.

But whereas the C-MAX Energi plugs into a wall-mounted unit, the C-MAX Solar Energi plugs into a unique canopy that was designed at Georgia Tech, according to a Ford press release. The canopy includes a Fresnel lens that Ford says boosts the impact of the sun’s rays by a factor of eight. The car itself can autonomously reposition itself throughout the day to take advantage of the sun’s position as it makes its trek across the sky.

“Electrification, solar [power] and autonomous [technology] are getting to a point where we can potentially drive our vehicles everyday using solar technology alone,” Mike Tinskey, Ford’s global director of vehicle electrification and infrastructure, told The Huffington Post.

In the case of the C-MAX Solar Energi, the car is able to draw 8 kilowatt-hours of electricity when under the canopy -- enough energy to fully charge the car's battery pack with a day's worth of sunlight, according to Ford.

The most noticeable change to the C-MAX Solar Energi (compared to its plug-in C-MAX Energi counterpart) is the roof-mounted solar panels, which were developed by SunPower Corp.

“The panels are extremely light. They’re not nearly as thick as they appear,” Tinskey told HuffPost, adding that he'd guess the system only adds a few additional pounds to the C-MAX Solar Energi.

Ford currently works with SunPower Corp. on its Drive Green for Life program, a plan that installs solar power systems to the homes of Ford customers so that they can charge their plug-in Ford Fusion and C-MAX Energi vehicles or Ford Focus Electric vehicles with the sun’s energy.

A SunPower Corp. representative told HuffPost that the 2.5-kilowatt system costs $10,000 to install, though Tinskey revealed that Ford would be relaunching the program with a new price point in the next few weeks.

This article has been updated with additional information about the charge time for the C-MAX Solar Energi's battery pack.