Think about this for a minute: Your pocket probably holds the sum total of human knowledge. (That's assuming your smartphone is in there. If you're using it to read this, 10,000 libraries of Alexandria are at your fingertips.) There is practically no limit to what one can achieve with just a smartphone and a Wi-Fi connection, from contacting people on the other side of the planet, to earning academic degrees, making money, or even just swiping right. But suck the power out of that smartphone and you're left with a useless hunk of plastic.

In the United States, cellphones die all the time, but our abundance of power ensures resurrection on demand. That's not how it works in other parts of the world.

In rural villages throughout Africa, there is no central grid to plug into. Yet despite this energy deficit, many Africans do own mobile phones - though recharging one can mean a three-hour bus ride to the nearest city. In Nigeria, some areas do have access to an electric grid, but there isn't enough power to go around. It doesn't matter if the electricity is being used for life-saving operations, because even hospitals are subject to rolling blackouts.

As Simon Bransfield-Garth, engineer and CEO of Azuri Technologies, explains, what separates developing economies from robust economies is not how much energy they generate, but how they access the energy that's available to them. When that access is granted, things change very quickly.

Many inhabitants of third-world communities live and die in "poverty traps," where upward mobility is restricted due to limited access to resources. "You're spending so much on your day-to-day existence that you can't afford to buy the things that allow you to not spend so much on your day-to-day existence," explained Bransfield-Garth. His company, Azuri, offers an affordable access point for escaping the poverty trap, with a sustainable business model that uplifts communities and plugs them into the knowledge economy.

With a PhD in Engineering from St. John's College, Cambridge, and over 25 years' experience building rapid growth, technology-based businesses, Dr. Bransfield-Garth boasts an impressive technical resumé. As solar technology became increasingly cheaper (First Solar projects installed costs of $1 per watt by next year), Bransfield-Garth was interested in finding where the next generation of solar panels would make the greatest impact.

Looking outside of conventional markets and into emerging markets, Bransfield-Garth concluded that the business opportunities in Africa were "really staggering."

With electricity at such a premium, and sunlight so plentiful in African states, the solar market should have been booming. But it wasn't.

"The answer comes down to something that's fairly fundamental with all renewables," said Bransfield-Garth. "If you move into a house, you expect to pay for the electricity you use, but if you go and buy a wind turbine or solar panels, actually what you end up doing is buying your own power station. That works fine, but you need capital to do that."

When even the hardest working individuals make between three and five dollars a day, that capital simply doesn't exist. But Azuri was sure there was a way to market solar power so that it cost less than kerosene and the combined investment of time and money for charging mobile phones.

"So we came up with the idea of combining mobile phone and solar technology so people could pay for their solar power as they used it, rather than paying all up front," said the Azuri CEO. 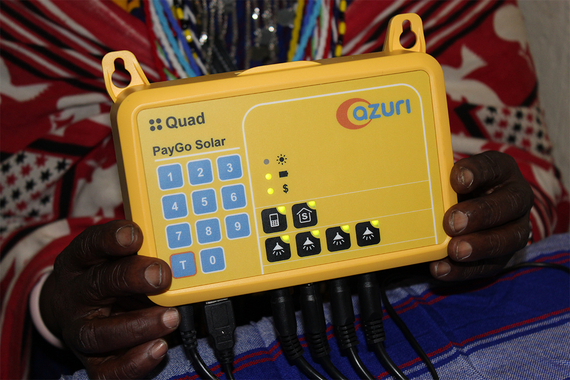 In 2011, the company helped pioneer the rent-to-buy business model for solar panels in Sub-Saharan Africa, with customers using their phones to pay a fee every week or every month. "That gives them a code which causes the system to work, and then at the end of that period it shuts off and they repeat that process. In Kenya, for example, we put a solar system in a house, free of charge, and then they pay for it on a subscription basis. It's a similar model to satellite TV in the West, except that the customer owns the equipment after 18 months," said Bransfield-Garth.

It turns out, the pricing model works like gangbusters, and several other companies have started doing the same thing. Azuri, however, boasts the widest reach of any pay-as-you go solar company in Sub-Saharan Africa.

Installing solar panels in an energy-poor area has a butterfly effect. This one action has profound ripple effects across the local economy, as Bransfield-Garth explained to Planet Experts:

"If you go to a village that has no access to electricity, the chances are people are using candles for lighting. They will have mobile phones, but they'll probably have to go on a three-hour bus journey to go and get them charged up. People have no access to TV, no access to the internet, except in as much as it comes through a mobile phone. They're disconnected from the knowledge economy. When you get solar power in the house, then the entry point tends to be lighting and mobile phone charging. What we find is, on average, children spend two hours a day extra on homework when they have solar lights, so it's entirely normal for kids to go from mid-class to top of their class in three months just because they're doing that much more studying." 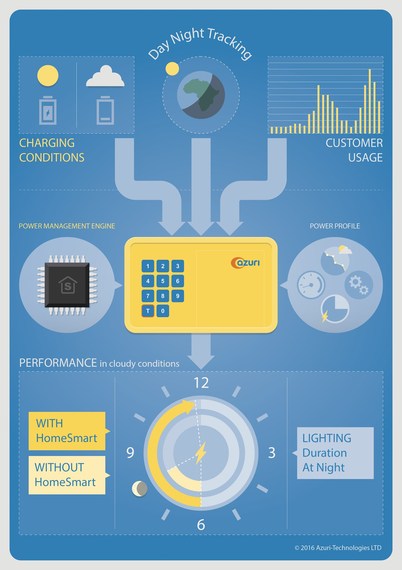 With access to affordable, self-generating power, families that no longer have to save for the cost of kerosene or travel long distances to charge their phones can keep their shops open longer. Farmers are able to process crops at home later into the evening. The access to power also allows individuals to buy appliances that make their lives more convenient. "They get a radio or they get a TV or they get a smartphone so they can access the internet," said Bransfield-Garth.

And, of course, the positive changes in customers' lifestyles also benefit Azuri from a business standpoint. Fellow villagers see the new prosperity and want to join in. "You get the opposite of the poverty trap," said Bransfield-Garth. "People are able to step up. We call it the 'energy escalator,' where people can step up progressively from one stage to the next, to gain access to more technology, which makes customers more productive, which gives them more money, which gives them access to more technology."

Best of all, once customers own their solar panels, there is no falling back to where they were before. And their energy independence is a fantastic marketing strategy for Azuri, which prides itself on being a part of this "virtuous circle," wherein the lives of both business and customer are improved by their relationship.

"Fundamentally, providing access to basic power and the knowledge economy is a tremendously leveling kind of activity," said Bransfield-Garth.

What's happening in Africa and other emerging markets is an intriguing reversal of the traditional tech story. Once upon a time, importing technology to the developing world could mean dismantling an old factory and giving it 10 more years of life somewhere else on the planet. But with distributed power systems, an energy revolution is taking place that is a generation ahead of the West. 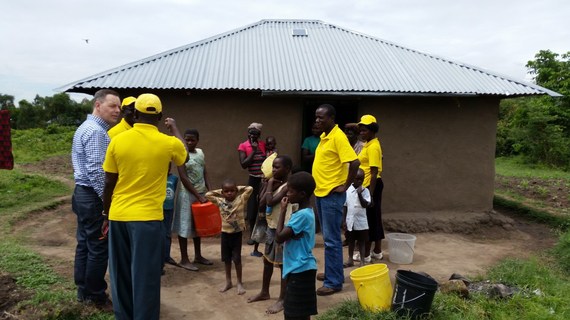 Right now in the United States, conventional energy is stuck in a tug-of-war with solar providers over issues like smart-metering and energy credits. Solar customers are increasingly disengaging from the large, centralized grids that have enjoyed a monopoly on power until this point. Meanwhile, in many parts of Africa, distributed power doesn't have any politics or grids to contend with. Entire regions of the continent leapfrogged landlines for mobile phones, and the same thing is happening with solar.

And those solar systems are becoming more advanced all the time.

Take HomeSmart, for example, an artificial intelligence program built into Azuri's software. As Bransfield-Garth explained, many solar products are designed to work in East Africa and Kenya, areas that are more or less sunny all the time. In many parts of West Africa and Ghana, however, there are about two months out of the year when the weather is generally cloudy. Customers that might get eight hours of light on a sunny day would be reduced to just two hours on a gray day.

"We thought, well, let's think about what the customer wants," said Bransfield-Garth. "[Households] want to be able to see at night. They're less concerned about how bright the light is, they just want to be able to see. So what we did is put a little artificial intelligence engine into the solar light, and it goes and figures out what the customer's average usage of the system is. Then, every night, it looks at how much power is in the battery and it adjusts the brightness of the lights, so you're guaranteed to get that duration of light every night."

Azuri claims that this is the "first time that machine-learning approaches have been used in small domestic solar home systems." The funny thing is, said Bransfield-Garth, it's not a feature they typically use as a selling point because it can be difficult to explain to customers.

"It's like the engine controller in your car that's looking after all sorts of things in your engine," he said. "Traction control, for instance. When you go around a corner, it makes sure that you don't spin off the road. It's not something that you can sell, it just means that the customer's experience is that much better." 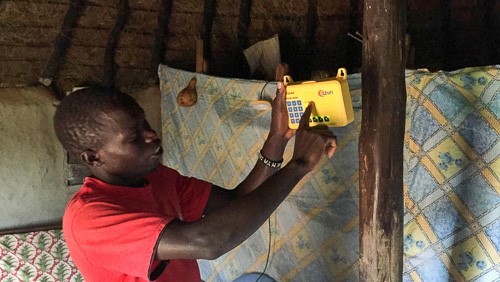 The HomeSmart system bases its decisions off of the customer's average usage and then fine tunes the brightness accordingly. This system is being used in rural villages right now, and yet some American utilities are charging their customers on flat rates. It's a salient instance of tech inequality, but not on the sides you'd expect.

And Simon Bransfield-Garth thinks this is the way of the future. "Five years ago, everyone said electrification means the grid. I think the trajectory is undeniably towards having more distributed power.

"It's very different in the West because of course you've always got the grid, so you've always got the alternative. But I think that the cost of distributed power is going down and the cost of centralized power, if anything, is going up. So having your own power generation is really important. Oddly enough, if you think about something like the HomeSmart technology, where it optimizes the use of available power, you can imagine in 30 years having a similar technology in your house in California where you optimize your solar power so you take as little out of the grid as you possibly can. But it will happen more slowly because, in the grand scheme of things, electricity in the West is relatively cheap.

"We'll see emerging markets be the prime movers in this space, and then that technology will progressively find its way back to more developed markets."