Is the solution a free popsicle?

Like SunRun and SolarCity, its main (and much larger) competitors in the solar-leasing game, Sungevity has begun making an aggressive push into the Northeastern market, where the high cost of electricity and, in some states, generous consumer incentives are driving substantial growth.

Earlier this month, the company took over all advertising space on Amtrak's Acela express trains, which run up and down the eastern seaboard from Washington, D.C., to Boston. According to Sungevity, it marked the first time a single brand had taken over all ad space on the trains.

On Tuesday, the company will descend on New York City -- and over the course of the next six weeks, on neighborhood festivals, farmer's markets and other local venues in New York, New Jersey, Maryland, Massachusetts and Delaware -- in a bright orange, solar- and biodiesel-powered truck. They'll be peddling solar awareness, Crane said, and free, branded popsicles in a variety of flavors, including strawberry, mango and hibiscus mint.

"There are families arguing about having the air conditioning on because it costs so much," Crane said. "So we said, let's go cool people down with free ice pops." The truck will also be festooned with electronic kiosks that will allow homeowners to register for a free quote on what a solar panel lease deal might save them.

Solar installations arising from power-purchase agreements or leases, in which the solar company assumes most or all of the upfront costs for installing a solar array and maintains ownership over the course of a contract, are booming. Details vary, of course, but for customers who reckon they couldn't afford to drop $15,000 or $30,000 on a solar system, firms in this sector can offer a way in, while often -- though not always -- reducing monthly electricity costs overall.

Sungevity has installed nearly 2,000 systems since launching in 2008, and while it does sell systems outright, the vast majority of customers choose leasing contracts, according to company spokesman John Ordona. About 60 percent of customers save money, or at least break even, from day one, Ordona said.

The rest, he added, will see savings over the long term.

"Nearly everyone except for the most extreme energy efficient homeowner saves against future electricity prices," Ordona said in an email, "because the price of electricity continues to rise." 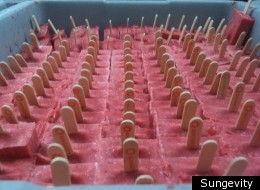 Jay Holman, a research manager at IDC Energy Insights, a market research firm, said precise numbers on the share of the market being driven by leases and power-purchase contracts was hard to come by -- though he said it was almost certainly substantial.

"The solar leasing model and the residential/commercial PPA model are having a significant impact on the marketplace in the US," he said in an email. "Those approaches reduce the hurdles to installing solar PV and they widen the pool of homeowners and businesses that can afford solar, which makes them important drivers of growth for the industry."

Just how effective Sungevity's ice-pop campaign will be is an open question, but the stakes on the East Coast are high -- and rising.

While California accounted for nearly 70 percent of solar photovoltaic installations just five years ago, it accounted for just a third of new installations last year, according to data compiled by the Solar Energy Industries Association, a trade group. Meanwhile, the share of new solar installations in Northeastern states has grown from 24 percent to 31 percent over the same period.

Of the top 10 states for new installations in the first quarter of 2011, four are in the Northeast: New Jersey, Pennsylvania, New York and Massachusetts. And annual installations in New England and the Mid-Atlantic are expected to double by the middle of this decade, SEIA reported, to over 800 megawatts in 2015.

Washington and Oregon were at 8 cents and 9 cents, respectively, in April. Idaho came in at under 8 cents.

"It's more of a driver than sunlight," Jurich said, adding that strong subsidy and other incentive programs in states like New Jersey and Massachusetts are driving growth as well.

And that has California-based companies marching eastward en masse.

San Francisco-based SunRun announced in early June that it was opening up new offices in Massachusetts, New Jersey and Pennsylvania. Two weeks ago, it announced new operations in Maryland. In February, SolarCity, headquartered in San Mateo, Calif., expanded its presence on the East Coast with the acquisition of Vermont-based groSolar's residential installation division.

Oakland-based Sungevity, meanwhile -- a comparative latecomer to the solar leasing game -- raised $15 million in funding last December to help launch its cross-continent efforts, which it has dubbed a "Rooftop Revolution."

In a phone call on Monday to discuss the company's Northeast ice-pop strategy, Sungevity's chief executive, Andrew Birch, said there was plenty of elbow room for solar leasing companies on the East Coast.

"Less than 1 percent of home energy comes from solar, so there's lots of space for companies to grow," Birch said. "The challenge is how are we going to persuade the other 99 percent? Our competition is really consumer awareness."