A massive solar superstorm could cause a spike in radiation levels on Earth, potentially disrupting terrestrial and space-based communications and slightly raising the risk for cancer among airline passengers and crew.

What's worse? Such an event is all but inevitable. That's the word from the Royal Academy of Engineering in London, which just issued a report spotlighting the potential danger and urging preventive measures.

Just how bad could it get? If it's anything like the so-called "Carrington event," pretty bad. That 1859 event -- considered to be the strongest solar storm on record -- reportedly set telegraph machines ablaze and triggered auroras borealis so bright that people could read well into the night.

Because of our heavy reliance on technology that is vulnerable to the effects of radiation, such a solar storm could be even more disruptive today.

"It will be perhaps comparable to the Icelandic volcano eruption [in 2010], or something similar, where there will be severe disruption to our way of life for a while," Dr. Paul Cannon, head of the team that produced the report, told BBC News.

But don't freak out. The possible storm is "something we believe we can deal with... Our message is: don't panic, but do prepare," Dr. Cannon said in a written statement released by the academy. "Many steps have already been taken to minimise the impact of solar superstorms on current technology and by following the recommendations in the report we anticipate that the UK can further minimise the impact." 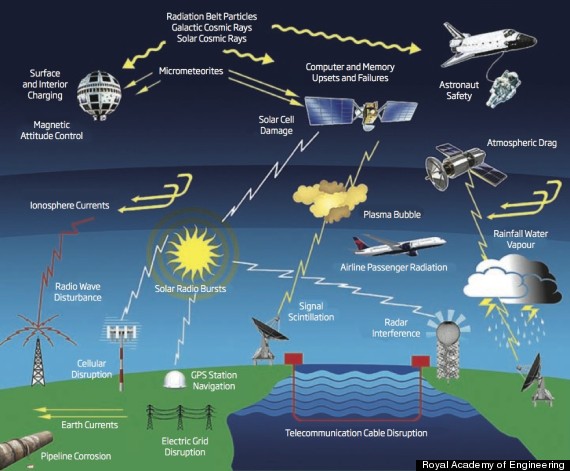 The report, "Extreme Space Weather: Impacts on Engineered Systems and Infrastructure," called for the creation of a UK space weather board to help plan for a solar superstorm. It also called for a system to warn of dangerous space weather radiation.

This is not the first major inquiry into the threat posed by solar storms. A 2008 study by the National Academy of Sciences detailed the social and economic impacts severe space weather could have in the U.S.