Though the landscape of Arlington National Cemetery is normally dotted with tourists, the holidays are quiet and solemn.

The few cemetery occupants include sentinels who stand guard at the Tomb of the Unknown and the volunteers who work to ensure the hallowed ground is honored and remembered during the holidays.

This year, vets, churches, schools and community groups laid a record number of wreaths on soldiers' tombs through volunteer group "Wreaths Across America," a tradition that began in 1992, The Daily Review reports.

Volunteers laid about 110,000 balsam fir wreaths -- complete with a bright red bow -- on headstones of fallen military members at Arlington National Cemetery, and about 400,000 evergreen wreaths at cemeteries in 50 states and 24 overseas sites, according to the Daily Review.

"I am the wife of a proud veteran, serving in the Navy. I cry when I hear our National Anthem played," Laura Hoppe of Waverly, N.Y., told the news outlet. "I'm proud to live in this great country, and have an opportunity to place a wreath on the graves of the brave men and women who proudly served. Placing a wreath on my husband's grave, gave me great comfort and peace,"

Volunteers weren't the only ones commemorating the holidays at the the cemetery.

The soldiers who guard the Tomb of the Unknown, a monument dedicated to unidentified American military members who have died, are from a division of the Army’s 3rd Infantry Regiment’s “The Old Guard” that stands watch 24 hours a day, 365 days a year since 1948, according to ABC News. The soldiers are known for their choreographed 21 paces when they “walk the mat.”

The sentinels at the Tomb of the Unknown Soldier go through intense training to earn the title, according to the U.S. Army site.

Sgt. Jonathan R. Pierce described his role as protector of the tomb during Christmas in 2010, telling the news outlet that as the assistant commander of the relief, he would guard the unknown and pace silently in front of the Tomb to show respect.

He and his soldiers guarded the tomb that Christmas eve into the morning when the next set up guards came on.

"It's different - you don't see as many people here. But being there on days like that rekindles your dedication to see that the Soldiers who sacrificed their identity are never forgotten, never dishonored," he told the U.S. Army site. "It's a privilege and an honor to be the one who gets to watch over them."

While watching the tomb over the holidays may mean missing a festive meal and quality time with the family, it doesn’t come with the added physical discomfort Sgt. Shane Vincent faced when he guarded the tomb during Hurricane Sandy in October, ABC News reports.

"I stayed out there for the entire shift," Vincent told ABC News of how he braved the elements during the superstorm. "I was the one that was out there, others would come and 'show love' and spend time with me out there."

Vincent headed to “the box” -- a small enclosure with a green awning 20 feet away from the Tomb, the AP reports. Relief soldiers would keep him company in one to two hour shifts, according to the news outlet.

The Old Guard also continued to conduct military funerals throughout the storm -- even as the wind picked up to 30 miles per hour, according to an army statement. They filled sandbags to act as levees in case the nearby rivers flooded.

"This could be one of us one day and we would want the same respect and honors," Staff Sgt. Waddell, said in a statement. "In light of whatever we may face, we are still going to get out there and do it." 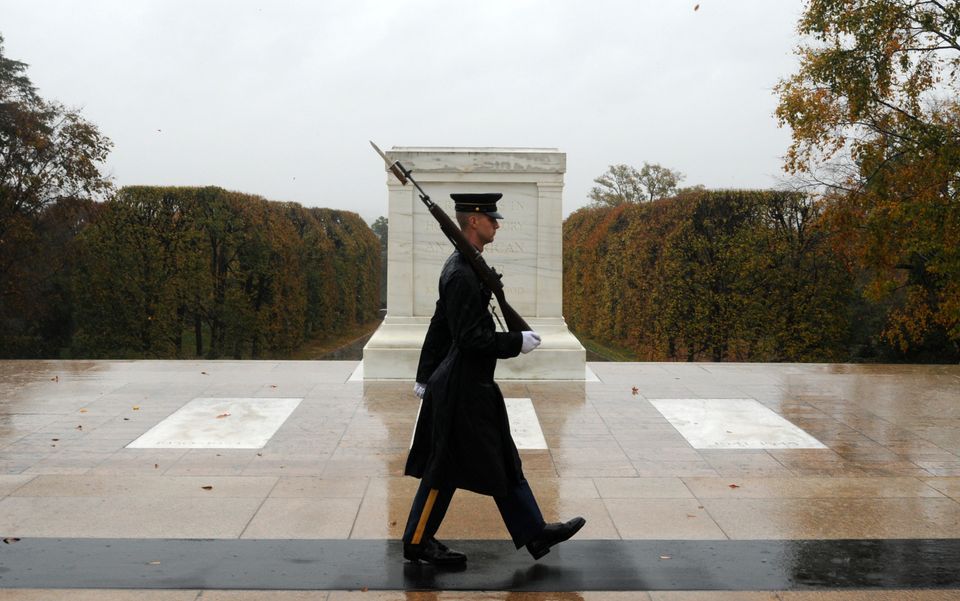 1 / 6
Brett Hyde
CLARIFIES WHEN PHOTO WAS MADE - This handout photo taken in the morning before the cemetery was closed for the day and provided by the U.S. Army, shows Spc. Brett Hyde, Tomb Sentinel, 3d U.S. Infantry Regiment (The Old Guard), keeping guard over the Tomb of the Unknown Soldier as Hurricane Sandy approaches, at Arlington National Cemetery, Va., Monday, Oct. 29, 2012. Just like the Sentinel's Creed says "Through the years of diligence and praise and the discomfort of the elements, I will walk my tour in humble reverence to the best of my ability." (AP Photo/U.S. Army, Sgt. Jose A. Torres, Jr.)
AP