Rape and pillage have historic roots in warfare, yet the "culture" of domination is still with us today. For the first time in history we are seeing a global response to this social problem that is being led by women. Though rape is defined as sexual assault without consent, it is commonly understood that rape can apply to non-sexual exploitation. Kidshealth.org states, "Rape is forced and unwanted. It's about power, not sex." Merriam-Webster online defines 'pillage' as, "the act of looting or plundering especially in war." Rape and pillage is a common tactic for conquering forces who often later occupy and set up colonies that became nations. Many of those nations are still with us today and the injustices of their practices have continued in subtle ways which have caused an unprecedented response world-wide to the oppression from dominating forces.

We have seen the word "Rape Culture" used in the media lately referring to the horrific gang-rape in India, the Steubenville, Ohio "Rape Gang" cover-up that was exposed by Anonymous's #Knightsec, as well as many other horrific stories of exploiting women or children. We see it in child slavery, child prostitution, and prisons, but we also see it happening to our sacred places in nature. Is it fair to say that clear-cutting a whole forest and destroying all of its diverse life-forms is an expression of rape and pillage? Taking publicly owned natural resources from indigenous communities to exploit for private gain with the assistance of the state may also be called another form of rape and pillage or modern colonial behavior.

It is fair to say that Mother Nature should be considered an expression of The Sacred Feminine. Power should not be expressed over the the weaker and more delicate beauties of this world, power should be used to protect, respect, and honor these things, women, children and nature alike. It gives great hope to see so many diverse expressions of solidarity and resistance to this domination culture from so many distinct people and organizations, so let's take a deeper look at the groundswell that is demanding change.

In last weeks article I spoke about Idle No More and hints of a global super-movement led by grandmothers from First Nations. I am happy to report that this week there will be international acts of solidarity across borders and cultures to support the #j11 Global Day of Action on Jan. 11. They have a Facebook Event Page and a website if you'd like to participate in your own community. There is also a wonderful resource by blogger Apihtawikosisan that is worth visiting to learn the deeper story behind broken treaties and Idle No More.

The wonderful folks at unify.org have also stepped up in solidarity to support The Idle No More Movement, and have posted links and an interactive map of events all over the world. Harnessing their global network of change-makers, meditators, and activists to bring unity to this shared vision of global transformation. After their enormously successful global broadcast of Unify Events on 12-21-2012, and their huge support from celebrities, I look forward to watching Unify become a global grass-roots movement bringing diverse communities together. 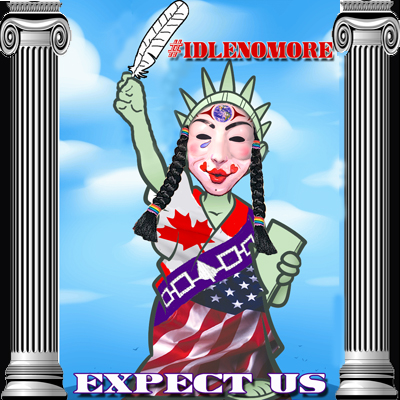 Anonymous has captured media attention in recent months as they have gone after child-porn sites and also gone after corrupt elected officials who use their position in society against the very people they are supposed to protect. This is a very interesting phenomena to see masked, anonymous citizens exposing cover-ups through social media. #Knightsec tweeted that he/she is using media as a weapon. In actuality the truth, itself, is the weapon, and Anonymous is merely exposing what has been covered up. Every time politicians, law enforcement, or big businesses use their power over people to exploit them or cover up criminal acts, they very well should be exposed for their behavior.

Eve Ensler has led the charge for many years standing up for women. You may have heard about her because of The Vagina Monologues (also known as "V-Day"), but you are about to see The One Billion Rising Movement sweep across the planet. On Feb. 14, and in the days leading up to and beyond, I am very excited to follow this emerging movement. From their website, "On V-Day's 15th Anniversary, 2.14.13, we are inviting one billion women and those who love them to walk out, dance, rise up and demand an end to this violence." The video at the bottom of this article brought tears to my eyes and deepened my conviction to stand up for The Sacred Feminine that has given life to all of us. Please watch it and share widely!

Before we go too far pointing fingers and demanding change from others, we must consider that domination culture is a part of human nature. For real change to occur, we must be able to look within our own selves at the impulses for these behaviors. Oppressing others is often a response to having been oppressed ourselves. The pecking-order happens in the macro as well as the micro. The needed change isn't about good guys or bad guys, it is about compassion, dialogue, and conscious evolution to leave behind elements of our past, of our nature, and no longer be defined or limited by our history.

Social media has given us the tools, history has given us the reason, love has given us the passion. In the age of information it is a choice to remain ignorant. We are one people on one planet with many voices and one prayer to make a difference. Please share through Twitter, Facebook and your social networks. It is time for The Sacred Feminine, including Mother Nature, and the many delicate beautiful things to have the justice and much needed respect they deserve. It's time to be the change we want to see, to end the various forms of rape, pillage, exploitation and domination that have harmed our children, communities and planet.

Enjoy the video below!