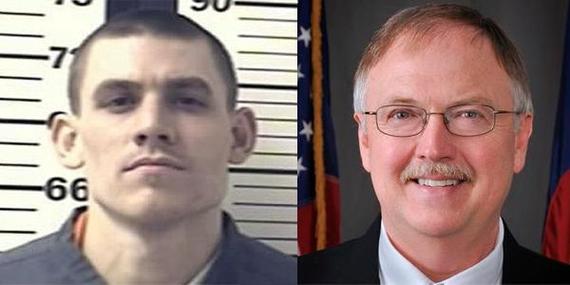 Evan Ebel was worried about leaving prison -- and reasonably so. His last couple years were spent by himself in a cinderblock cell the size of two queen mattresses.

Before his release Ebel wondered, in a written grievance, "Do you have an obligation to the public to reacclimate me -- the dangerous inmate -- to being around other human beings prior to being released and, if not, why?"

Repeated requests for treatment fell on deaf ears: That complaint in particular wasn't answered until Ebel was out and in the community. The rest is in the papers.

Released in 2013, Ebel showed up at the door of Colorado prison chief Tom Clement, and shot him in the face. Two days before, Ebel murdered a Domino's deliveryman.

And that case isn't even the tip of the tip of the iceberg -- 80,000 people sit in solitary at this very moment. Plus, that government statistic ignores many other forms of isolation simply not considered as such, like prison lockdowns, which in one federal prison lasted 23 years. To find out more about the effects of extreme isolation on the mind I sat down with Dr. Terry Kupers, professor at the Wright Institute and national expert on solitary confinement:

"It's a foolhardy course to lock people up in solitary ... Really, the only question is not how terrible this person is or the crime they committed. The question is, when they're done serving their time, are they more or less likely to commit another crime?" Kupers added, "The strongest correlation we know of in corrections is that solitary confinement causes people to be incapable of succeeding in the community when they get out. It's as if we want them to fail."

Dr. Kupers point holds in Texas. Last year, well over half of the people released from solitary went straight to the streets -- no preparation, no adjustment period, only $100. Not to mention, the average stay in solitary was over two years.

There's a reason 66% of released inmates are rearrested within 2-3 years. Many can't cope with the social world.

"A lot of people shut down, and that's what I'm most worried about ... It's a byproduct of isolation. They're afraid that their rage will get them in trouble, so they clamp down on it. When they clamp down on their rage, what starts to happen is their affect gets flattened out, because they're clamping down on everything else, too. So they don't feel joy. They don't enjoy anything. They don't cry," Dr. Kupers explained.

Instead of externalizing rage, like Ebel at Clement, most turn inward.

"They go home, and their mother calls me and says he won't come out of his room. And I say well, ok, he's been in a room by himself for 20 years ... You've been in a little room -- a jail cell -- so you want to create a situation like what you knew all those years."

Kalief Browder was 16 when he started his bid at Rikers. Though his charges were ultimately dropped, he spent 1000 days in Rikers. He estimated 700 to 800 were spent in solitary.

Even when the charges were dropped, release brought no solace. Just different challenges. With no diploma, no job, and no money, every time Browder hung with friends he was painfully reminded of just how behind he was. He couldn't talk to girls -- what could he tell them when they inevitably asked about where he worked or went to school?

"Many of his former pastimes--playing video games, watching movies, shooting hoops in the park--no longer engaged him. He preferred to spend time by himself, alone in his bedroom, with the door closed. Sometimes he found himself pacing, as he had done in solitary."

Even after receiving an outpouring of support following the New Yorker profile, from icons like Jay-Z, and generous financial support form an anonymous donor to continue and complete his education at Bronx Community College, 22-year-old Kalief flung himself out of a window with the cord from his air conditioner strung around his neck.

Broken and reclusive (and less likely to garner hawkish media coverage) the ubiquity of these numbing symptoms, and their relationship to PTSD, is disturbing. The result is an obvious and pressing humanitarian crisis. There is also an unprecedented loss of what is called human capital: The constellation of ideas, knowledge, and energy unique to each person. That is the double-sided insanity of prolonged isolation -- a popular and draconian management technique that only worsens existing problems.

The culture of control and punishment bred in prison wastes minds and devalues talent, leaving us both less safe and more in need of prisons and guards. Don't be fooled by reformist overtures; many politicians, like Rick Raemisch, the replacement for Tom Clement (as Colorado's prison chief) have a stake in failed reentry. Their jobs depend on it.

The basic problem is that folks subjected to isolation aren't able to skip out of prison, grab a job from the job tree, and start down the yellow-brick road to rehabilitation. Advocates are needed. The ACLU recently launched its campaign to Stop Solitary, using high-impact litigation to end this inhuman policy altogether. Legislative and legal recourse is, however, unlikely without active grassroots support: Solitary Watch is an excellent resource for learning more, while Root and Rebound provides needed legal and wraparound services to returning citizens, and can be supported with donations and time.

With at least 80,000 in isolation, organizations are fighting for transformative change, in courts of law and public opinion. Grasping at the link between solitary confinement and psychological transformation points to the depth and critical thinking required to imagine solutions and effectively address the problem.

This article was originally posted on: https://rootrebound.wordpress.com/