"What do you think of this for my title: Up Against the Clock? " my sister asked me. She was writing a book about women's decisions to have children.

But let's go on. Physicists and philosophers debate whether time exists, yet we measure it anyway. Our 24-hour day of 60-minute hours evolved from timekeeping in ancient Babylon. The astronomer Berossas described a solar clock in detail; students in my class "Ancient Inventions" made the working model you see here: 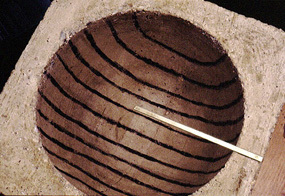 The clock's "mechanism" is simplicity itself: a hemispherical bowl with a pin set on an edge. The bowl's inner surface is incised with 12 arcs, equally spaced apart. At sunrise the shadow of the pin touches the western rim. As the sun rises the shadow sweeps back across the arcs until it vanishes at noon. Then it lengthens on the other side until at sundown -- 12 o'clock -- it reaches the eastern rim. Simple, yes? But you see the problem. Since each day has 12 equal hours, their lengths vary with the season. In New York City on June 21, 2014, the summer solstice, the sun will rise at 5:25 a.m. and set at 8:31 p.m., Eastern Daylight Time. By our reckoning, that Babylonian day will be 15 hours, 5 minutes, and 39 seconds long. Dividing by 12, you get hours of 75.5 modern minutes. Their hours match ours only at the equinoxes.

Bablylonian timekeeping persisted into the 20th century in a few places -- we'll come to one of them in a minute -- though mechanical clocks had long since spurred a transition to a sunset-to-sunset 24-hour day. In that "equinoctial" system, the hours were equal, night and day, year-round. Better but still not perfect: Since the day began at sunset, one day's 0 o'clock was not the next's. If you had a clock, you had to reset it each evening. Our modern date- and place-independent midnight-to-midnight system, with Greenwich Prime Meridian, was agreed to by an international convention in 1884. But the changeover was slow, explains Avner Wishnitzer, who wrote his dissertation on Ottoman timekeeping, because the equinoctial system was deeply embedded in the culture. (Have you given up inches and ounces?) The telegraph and railroad, not the international decree, eventually did equinoctials in, yet sunset-to-sunset days are still observed in religious traditions.

The even-more-primitive 12-hour Babylonian solar day persisted into our era because it was embedded in culture too, especially where the culture was agrarian. Farmers live by the natural rhythm of sunrise, noon, sunset. The deficiencies of Berossas' clock, so evident to us, may have escaped its users. I find a hint of this in a 1909 travel book, High Albania, by the intrepid Edith Durham (1863-1944). The oldest child of a London surgeon, Durham followed the custom of her time and her class, caring for her invalid widowed mother instead of marrying and raising a family of her own. By middle age, she was a stressed-out wreck. Her sympathetic doctor prescribed travel. Durham set off, not for fashionable watering holes but for the mysterious Balkans. In the decades before the Great War, she found her calling in the rugged, isolated mountains of northern Albania. Traveling by foot and horseback through this outpost of the crumbling Ottoman Empire, she came to know, admire, and love a "land that time forgot," whose people still lived by an ancient code that dictated unconditional hospitality and unforgiving blood feuds alike.

Curious, lively, intelligent, and a good artist too, Durham noted customs, dress, and conversation. She withheld judgment for the most part, though later she would be accused of pro-Albanian bias. But she found the rigid mealtimes one ancient custom too many. Strong coffee at sunrise, dinner at high noon, and supper after sunset: The schedule never varied, day in and day out, winter, spring, summer, fall. "The Albanians have a custom cruel to those that are not to the manner born," she complained. "Sunset in Turkish time is twelve o'clock. They therefore maintain, nor could I ever convince them to the contrary, that supper is always at the same hour all the year round." As by their clock it was.

"I did not enter into the fruitless argument about the sun setting late in summer," she sighed, "because in Albania it always sets at the same time -- twelve o'clock."

"In England maybe the sun sets later in the summer, but with us never," her Albanian guide told her.

Twenty years ago, my husband and I retraced Durham's footsteps. Literally, in several places: "The great Edith Durham stayed in this very house!" we were told. We found traces of Durham's Albania too: Our hosts were as kind and generous as hers had been, and blood feuds had resumed after a 50-year communist-decreed hiatus. But time had remembered Albania at last: The mountaineers wore wristwatches. Today they Skype with their emigrant children. 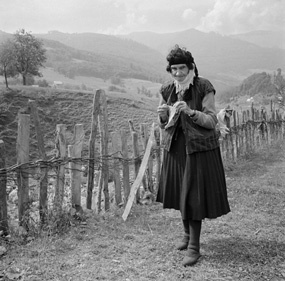 At solstice time, I think of the many clocks we live by. I told my sister like it really was, but then again, it wasn't really. Once (once?) we were late for some urgent appointment. One of my kids, then a tot, was playing in her room.

"Just a minute!" she cheerily replied. Too young to tell time, she'd picked up "minute" from me.

Professor, Mathematics and History of Science and Technology, Smith College