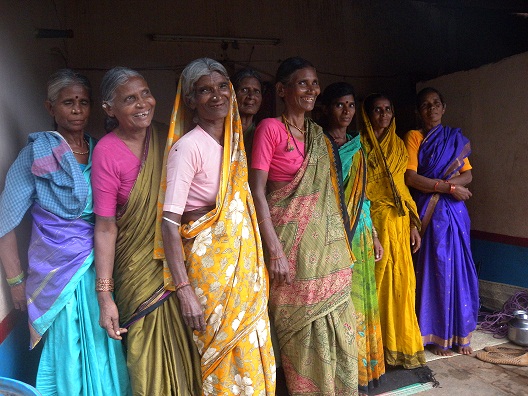 In the late sixties, my life changed forever. I asked, Why are millions of people going hungry? Every other species seemed to have figured this one out -- how to feed itself and its offspring. So what's up with us?

Headlines screamed "scarcity," there's just not enough! But lo and behold, as I added up the figures, one truth jumped out. There was enough food for all; and, today, it's even truer-- with at least 30 percent produced for each of us.

So over the decades after Diet for a Small Planet came out, I tugged away at layer after layer of "whys," and, finally, I came up with a sound bite I loved, "Hunger is not caused by a scarcity of food but by a scarcity of democracy."

And what does it mean?

Simply that, at root, the problem is one of the concentrations of social power so extreme that -- from far-flung fields to the global supermarket -- they deprive people not only of food but of dignity, of confidence in their own proven capacities.

Okay. My sound bite made sense to me, but what good was its "truth" without examples of people actually acting on it? Without real-life proof of people seizing the root and transforming human relationships into true, "living democracies"? Certainly, I knew the weak notion of democracy I'd grown up with -- democracy equals markets-plus-elections -- wasn't it. So what did I mean? Where is democracy emerging that's vital, engaging, and empowering enough actually to get to the root of needless hunger?

But never would I have imagined that one day I'd be sitting and sharing heart-to-heart with leaders embodying multiple dimensions of living democracy and simultaneously ending -- not "alleviating" -- hunger in their communities. Yet, this fall, there I was. In northern India, I celebrated with Navdanya -- its 25 years spreading empowering, ecologically renewing farming practices to hundreds of thousands of farmers. Then, in southern India, a few hours from Hyderabad, I sat surrounded by a dozen women in brilliant saris on a straw mat, gazing at beautifully arranged mounds of diverse seeds from their own fields.

I first asked the most basic questions. What was it like twenty years ago?

"We were so poor that in the rainy season our hut floors would turn to mud and we had to pile up branches to sleep on. We were always hungry. We depended on government ration cards. Sometimes the big landowner would pay us for a job with some grains and that would be the only food for our children. We were so poor we had only one sari -- not even a second one to change into when we bathe.

My husband was a gambler, he was not ever here. I lived on sorghum and broken rice. Our life was dictated by bigger people. We had to suffer, even if they beat us. It was a dark time."

"We started meeting, talking. Every week now, at nine in the evening our sanghams [groups of women} come together and make decisions together. We tell each other our problems. If someone was abused, all of us go together to confront him. And now if there is a conflict in our village, they call on us. Through the sanghams, we've reclaimed the land. We don't use any chemicals. We grow as many as 25 crops on an acre or two."

What about the village food security solution I'd read about -- where you come together as a village and reach consensus on storing enough food so the most vulnerable families get what they need in the lean season?

"We don't need to do that anymore. Every family has food security now."

The next day I walk into the fields that these women and their families farm. I learn more about their years of effort to rid the fields of rocks, create water conservation trenches, and establish synergistic cropping patterns. The soil still looks pretty dry and rocky to me, but proof of the women's deep knowledge of how to make it productive anyway was waving above my head -- yellow, white, brown, red millets; and lower down, oil seeds and gram. There, too, were essential plants for natural pest control.

Like two-thirds of Indian farming, there's no irrigation here. Rain matters a lot. So I asked, "Aren't you worried about climate change bringing more drought?"

"No. We know what to do. If rainfall is cut by half, we know which seeds will work. If it drops more, we have other seeds."

I learn how DDS women enhance biodiversity by saving and sharing seeds; how they create common plots for medicinal plants and learn and teach the healing arts.

Their 3,000 member-strong cooperative market is growing by at least 20 percent a year. And DDS women also run their own "media trust," learning and teaching videography through which they are documenting their journey, as well as their own community radio station that broadcasts tips on ecological farming, health, raising trees, and other relevant information, right along with traditional music.

A few years ago, DDS calculated that the women's leadership has meant the production of almost three million extra meals each year, as well as almost 350,000 additional days of employment in their villages. And that same leadership is re-balancing gender relationships, radically reducing domestic abuse.

We have achieved "food sovereignty," they told me. But what struck me most? These words: "From the sanghams what we've gained most is courage."

And with courage comes dignity -- there before me in full force in the pride of their gleaming smiles.

Today in India 46 percent of children are still stunted by malnutrition, and this state, Andhra Pradesh, has long been known both for its heavy use of agricultural chemicals and high rates of suicide by farmers trapped in debt, because buying seeds, fertilizer and pesticides can typically eat up half a small farmer's income.

All true. But the women of DDS, and millions of people like them in India and around the world, prove to me that there is a solution to world hunger. They live it -- what a gift. I see now that it happens when we break free of imposed disconnection, find our courage, and combine our creativity. Then democracy is no longer something done "to us" or "for us." It is our way of life.