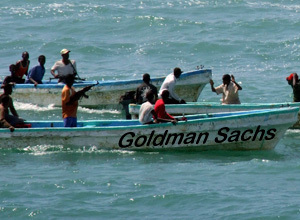 There was an audible gasp in court when the leader of the pirates announced, "We are doing God's work. We work for Lloyd Blankfein."

The pirate, who said he earned a bonus of $48 million in dubloons last year, elaborated on the nature of the Somalis' work for Goldman, explaining that the pirates forcibly attacked ships that Goldman had already shorted.

"We were functioning as investment bankers, only every day was casual Friday," the pirate said.

The pirate acknowledged that they merged their operations with Goldman in late 2008 to take advantage of the more relaxed regulations governing bankers as opposed to pirates, "plus to get our share of the bailout money."

In the aftermath of the shocking revelations, government prosecutors were scrambling to see if they still had a case against the Somali pirates, who would now be treated as bankers in the eyes of the law.

"There are lots of laws that could bring these guys down if they were, in fact, pirates," one government source said. "But if they're bankers, our hands are tied." More here.