DADAAB, Kenya -- Faduma Sakow Abdullahi and her five children tried to escape starvation in Somalia by journeying to a Kenyan refugee camp. Only one day before they reached their destination, her 4-year-old daughter and 5-year-old son died of exhaustion and hunger.

At first the 29-year-old widow thought the two were merely sleeping when they wouldn't get up after a brief rest. She had to leave their bodies under a tree, unburied, so she could push on with her baby, 2-year-old and 3-year-old.

She saw more than 20 other children dead or unconscious abandoned on the roadside. Eventually a passing car rescued the rest of her family from what could have been death.

"I never thought I would live to see this horror," she said, tears rolling down her cheeks as she described the 37-day trek to Dadaab, the world's largest refugee camp. Take a look at AP photos of the crisis, then scroll down to keep reading.

Tens of thousands of Somalis have watched their land dry up after years without rain. Then the livestock died. Finally all the food ran out. Now they are making the perilous journey over parched earth to refugee camps in Kenya and Ethiopia, regions that also have been hit hard by drought.

The U.N. expects at least 10 million people will need food aid, and a U.S. aid official said Monday he believes the situation in Ethiopia is even worse than the government acknowledges.

The Ethiopian government announced Monday that 4.5 million people need food aid there, 40 percent more than last year. Jason Frasier, mission director of USAID in Ethiopia, the U.S. government aid arm, suggested that Ethiopia might even be undercounting those who need help.

Aid agencies are appealing for more than $100 million in emergency funding while warning of dire consequences if help does not arrive.

Dadaab was originally built for 90,000 people; more than 382,000 are now here. People die here every day, though no one can provide a reliable estimate of the drought deaths. Advertisement

"I must say that I visited many refugee camps in the world. I have never seen people coming in such a desperate situation," the head of U.N.'s refugee agency, Antonio Guterres, said Sunday while visiting the new arrivals area.

Most of those coming to Dadaab are former subsistence farmers whose lands were rendered idle and animals decimated after successive seasons of no rain hit their already war-ravaged country.

Hundreds of mothers and children with dust-caked faces gather at 6 a.m. every day at registration centers in Dadaab's three sprawling camps.

Abdullahi, whose two children did not survive the journey, said her family's problems took a turn for the worse after her husband died in May. Still, with 20 cows and a small parcel of land, her family had enough to live on.

But when the rains failed, the cows died and the supply of maize was depleted.

"We started to dig up roots of trees to survive," Abdullahi said, while her 3-year-old daughter who survived the arduous journey played near her.

Abdullahi lost her 4-year-old and 5-year-old, but in many cases parents are dying first.

Andrew Wander, a spokesman for Save the Children, said his agency provides care to more than 300 unaccompanied children who were found on roadsides after their parents died or abandoned them.

"More children have died of malnutrition in the first four months of this year than in the whole of last year," he said.

Abdi Aden, a former farmer who lived in Sakow town before the drought forced him to flee, said he lost an 8-year-old son after eight days of trekking.

"He tried to cry before he died, but he could not. He was so weak. He died peacefully from hunger," he said. "I buried him by myself in a shallow ditch so hyenas could not eat him."

On her way to Dadaab, Abdullahi said she walked with friends for three days before she and her children lagged behind. She saw around 20 children dead or unconscious abandoned on the roadside.

"I saw two elderly people on the road," she said. "They cried out, 'Ma'am, give us a helping hand.' They wanted to sweet-talk me, but I said to them 'I can't help' and moved on.

"You will feel kind only when you have something," she said. "I wanted to give the little water I had to my children." 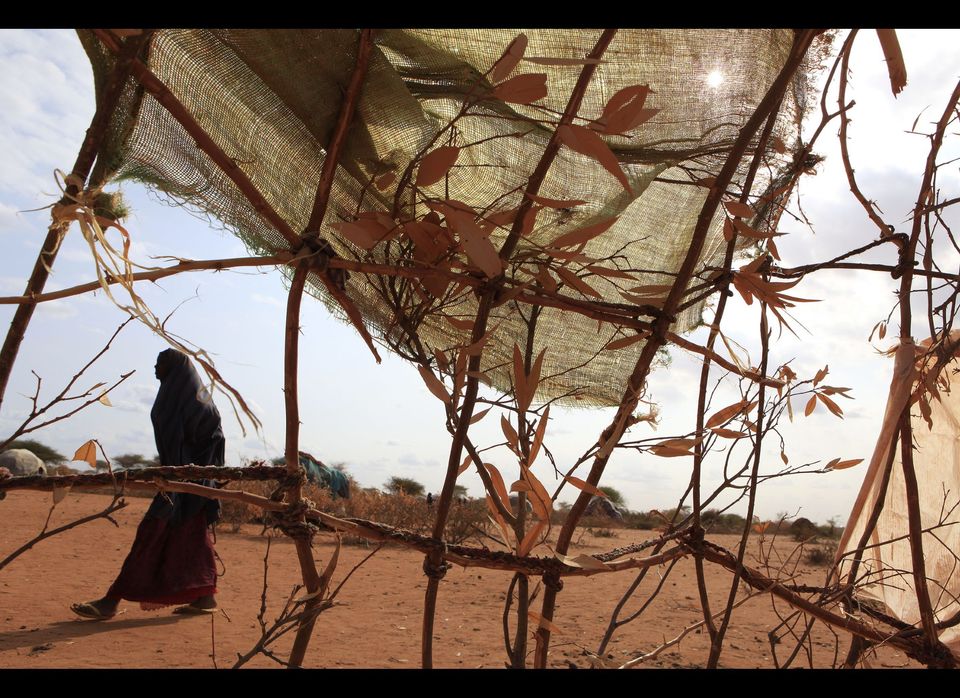