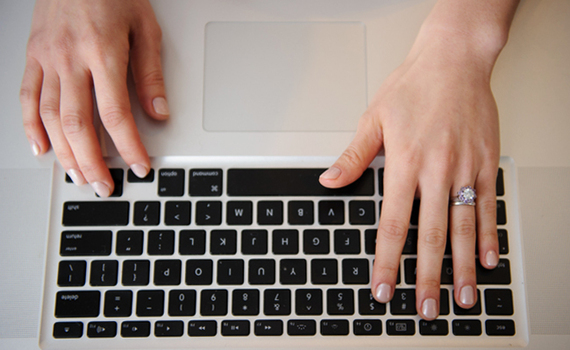 By Lisa Freedman for TheKnot.com

Some wedding professionals are adding fine print to their contracts forbidding couples from leaving negative reviews online. And they're serious: Brides who break these contracts are being threatened with lawsuits.

Lauren Beale** came back from her two-week honeymoon expecting to find her wedding photos waiting for her. After all, it had been more than four months since her wedding day. Instead, she found a letter along with multiple emails and voicemails from her photographer who was threatening to sue her. Before she left town, Beale had posted an online review, which the company claimed was against the terms of her contract. But Beale says her review was an honest account of her experience: "I had been haggled throughout the whole process, so I simply said I didn't think it was a good value," she says. "It wasn't even that bad -- I still gave them four out of five stars!" When the company reminded Beale of the contract she had signed and threatened to take her to court, she couldn't believe it. Her photos were being held hostage! In the end, she had the post removed, the photographer backed off and Beale eventually got her photos. But she's not the only bride finding herself in this situation.

The Not-So Fine Print
A growing number of vendors are adding clauses to their contracts to prohibit couples from posting any negative reviews online. And these wedding "professionals" are quick to threaten brides who break these contracts with legal action. One Virginia bride, who recently blogged anonymously about a certified letter she received from a vendor, worried she could be facing a defamation lawsuit for up to $350,000. Yep, her online rant could potentially cost her the price of a modest house. Beale's photographer has reportedly sent similar legal notices to several other brides. Kristin May**, a bride from Chicago, got a letter from a photographer who she had originally booked but ultimately decided not to use. "They said they wanted to give me the opportunity to avoid legal action," she says. May was furious. She claims that she had left a fair review on the site explaining why she decided to use a different photographer. Apparently her booking and cancellation contracts both had a line stating that in the case of a dispute, it will be kept confidential and neither party will disparage the other. But May says there was never any conflict. "I just decided not to use them!" she exclaims. She also ended up taking down her review in order to avoid any legal action. Recently The Knot has also received a few phone calls from panicked brides facing legal troubles. "One DJ told a bride she had to pay him $5,000 because his contract clearly calls for a fee if the couple posts anything below a five-star review," Kristin Savilia, executive vice president of local enterprise at The Knot, says, adding that it's important to carefully read contracts before signing them.

More from The Knot: 10 wedding questions you didn't know to ask

A Sign You Shouldn't Sign
We polled a handful of award-winning wedding professionals and they were all appalled to hear of this fine print. "If a bride sees this in a contract, she should go running for the hills to look for a more professional vendor," says Jonathon Towle of Apollo Fotografie in San Francisco. A reputable vendor who does their job well shouldn't be worried about potentially terrible reviews, and Towle wants to know what a company could possibly be trying to hide with a clause like that. The other pros agree, saying they love feedback from their brides and would never dream of silencing a client. Bridget Nannen from Greens Point Catering in Longmont, Colorado, says reviews -- good and bad -- help keep their company in check, while Powers Photography Studios in Portland, Oregon, says they welcome all reviews, but they have one condition: "We do have a clause that asks couples to contact us first if they have something negative to say, so that we have a chance to remedy any problem," says Erin Cope. "It's so much better to have them tell us and talk it through versus having a rash review online and nothing gets fixed." Still, Cope says that she would never threaten legal action even if a bride chose not to come to them first.

Seek Out the Truth
Unfortunately, it can be hard to spot a no-review clause in a contract. Beale had no idea that fine print was even there. "It basically said they own everything I say or write about them, but there was no way the average person could understand it," she says. And, since she had no idea to look for such a sneaky clause, nothing she read raised any red flags. So how can you detect these hidden clauses? Attorney Rob Schenk of the Schenk Law Firm in Atlanta, suggests you keep an eye out for phrases like "non-disparagement" or "agreement not to disparage." Also just flat out ask about their review policy. If it turns out they have a no-review clause but you have your heart set on working with them, ask them to remove it. "All contracts are negotiable," Schenk says. If they refuse, that's a good sign you should move on to someone new.

More from The Knot: The worst wedding advice ever!

All Talk, (Probably) No Action
Getting threatened with a lawsuit can be seriously scary and rightly so, but if you're facing this situation try not to panic. Because these clauses are so new, there's not a lot of legal precedence that indicates a court would find a breach of contract claim sustainable in these situations. Ryan Bleek, an attorney in Boston who blogs at Wedding-Lawyer.com, believes that these claims of breach of contract go against public policy, and likely won't hold up in court. "Most courts want consumers to be able to freely give their opinions and, therefore, a contract that throws away that right may not be enforceable," he explains. Plus most lawsuits are expensive and time-consuming, so it's in the vendor's best interest to avoid actual litigation.

Trusting What You Read
Review sites are supposed to give brides a voice and freedom of speech. But how can you tell if reviews are being squelched or if someone is adding false positive ones? Well, researchers at Cornell University wanted to find out, so using data from 400 real and 400 fake reviews, they developed a computer algorithm to detect the fakes -- and it works about 90 percent of the time. Here's what they found: The false reviews lacked specific descriptors but played up superlatives (out of this world, best ever) and lots of adverbs (really, very). They also used the words "I" and "me" a lot, as well as more exclamation points than genuine reviews. If you don't have an algorithm on hand, Savilia has another trick for picking a legitimately good vendor: Find a vendor with both positive and negative reviews. No vendor is going to be perfect every day, so it's unrealistic to only have positive reviews. "Look for the negative reviews. Then, see how the vendor responds. If a vendor responds maturely, that's whom you want to work with," she says.

Watch Your Words
When it comes time to write your reviews, the best thing you can do is to calmly re-read everything before you post. Venting your frustrations on the web may feel good in the moment, but it could come back to haunt you -- especially if you write something that's not 100-percent accurate. While breach of contract cases may not hold up, defamation can be a serious matter. "If you say, for example you saw the caterer spit into the drinks and it's not true, then you could be in trouble," Schenk says. Stick to the honest truth about what happened. "Then, you should be okay, because the law allows you to do that," he says.

The Knot does not provide any legal advice. Please consult with a lawyer for legal advice.
**Name has been changed to protect identity.

More from The Knot:
10 wedding rules you can break
20 crazy color combos
10 ways to ruin a wedding
Weirdest wedding vows ever