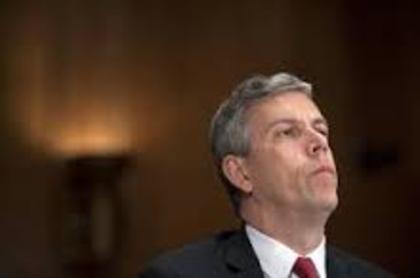 US Secretary of Education Arne Duncan

On April 7, 2015, the Senate education committee announced the following as part of a press release:

The result of the Lamar-Murray collaboration on the Elementary and Secondary Education Act (ESEA) reauthorization (the latest version of which is renamed No Child Left Behind) is this 601-page document entitled, The Every Child Achieves Act of 2015.

I read the entire 601-page draft, which I refer to below as the Alexander-Murray reauthorization, and wrote about it as a series of six posts. Below are the contents of my first post in that series.

The first construction I noticed was that the Alexander-Murray reauthorization document does not include the controversial name, No Child Left Behind" (NCLB) (pg. 4). Yes, the table of contents to be revised is the NCLB table of contents. (To view the complete NCLB document, click here.) However, the original name of the legislation, the Elementary and Secondary Education Act of 1965, is the name that Alexander and Murray use.

I will still use NCLB for the sake of clarity.

Section 1001 of NCLB ("statement of purpose") is lengthy and included details such as, "holding schools, local educational agencies, and States accountable for improving the academic achievement of all students, and identifying and turning around low-performing schools that have failed to provide a high-quality education to their students..." and "providing greater decision making authority and flexibility to schools and teachers in exchange for greater responsibility for student performance."

The Alexander-Murray reauthorization "statement of purpose" is not nearly so detailed:

The purpose of this title is to ensure that all children have a fair, equitable, and significant opportunity to receive a high-quality education that prepares them for postsecondary education or the workforce, without the need for postsecondary remediation, and to close educational achievement gaps.

The Alexander-Murray reauthorization also removes NCLB Sections 1111 through 1117, which is the federal micromanagement over states being "sure" that districts are meeting state designations of "proficiency."

The Alexander-Murray reauthorization includes general language about states submitting "evidence-based strategies for improving student achievement" to the US secretary of education. I was initiallu concerned about the secretary's power to possibly require states to implement certain standards and assessments, and use those assessments to grade teacher and schools, until I read the following (pgs. 23-27):

''(6) LIMITATIONS.-- 4 ''(A) IN GENERAL.--The Secretary shall not have the authority to require a State, as a condition of approval of the State plan or revisions or amendments to the State plan, to--

''(i) include in, or delete from, such plan 1 or more specific elements of the challenging State academic standards;

''(iii) set specific State-designed annual goals or specific timelines for such goals for all students or each of the categories of students, as defined in subsection (b)(3)(A) ;

''(iv) assign any specific weight or specific significance to any measures or indicators of student academic achievement or growth within State-designed accountability systems;

''(v) include in, or delete from, such a plan any criterion that specifies, defines, or prescribes--

''(I) the standards or measures 2 that States or local educational agencies use to establish, implement, or improve challenging State academic standards, including the content of, or achievement levels within, such standards;

''(II) the specific types of academic assessments or assessment items that States and local educational agencies use to meet the requirements of this part;

''(V) the specific weight or specific significance of any measure or indicator of student academic achievement within State-designed accountability systems;

''(VI) the specific annual goals States establish for student academic achievement or secondary school graduation rates, as described in clauses (i) and (ii) of subsection (b)(3)(B);

''(VII) any aspect or parameter of a teacher, principal, or other school leader evaluation system within a State or local educational agency; or

''(VIII) indicators or specific measures of teacher, principal, or other school leader effectiveness or quality; or

''(B) RULE OF CONSTRUCTION.--Nothing in this paragraph shall be construed as authorizing, requiring, or allowing any additional reporting requirements, data elements, or information to be reported to the Secretary not otherwise explicitly authorized under Federal law. [Emphasis added.]

What I envision in reading the above limits is the tying of US Secretary of Education Arne Duncan's NCLB-waiver, power-wielding hands.

According to the Alexander-Murray reauthorization, once approved, a state's plan is good for the entire 7 years of the ESEA reauthorization, unless the state changes its standards, assessments, or teacher evaluation. In such a case, the state plan would need to be revised and resubmitted to the US secretary of education for approval of the revised sections.

EXISTING STANDARDS.--Nothing in this part shall prohibit a State from revising, consistent with this section, any standard adopted under this part before or after the date of enactment of the Every Child Achieves Act of 2015.

As for assessments: Yes, they are required in grades 3 through 8 and once in high school for math and English language arts/reading and also science (though not as often). The states choose their assessments, which have the following requirement (pg.36):

The states can administer assessments "as one single summative assessment" or "be administered through multiple statewide assessments during the course of the year if the State can demonstrate that the results of these multiple assessments, taken in their totality, provide a summative score that provides valid and reliable information on individual student achievement or growth."

As to "closing the achievement gaps," the Alexander-Murray reauthorization notes that states are required to submit as part of their accountability plan information "to ensure that all students graduate from high school prepared for postsecondary education or the workforce without the need for postsecondary remediation and at a minimum." Such info needs to include details on four subgroups: "economically disadvantaged students; students from major racial and ethnic groups; 14 'children with disabilities; and English learner students" (pg. 47). States must frame such goals in terms of state assessment outcomes and graduation rates.

For each of the four subcategories of students above, "not less than 95 percent" of such students must be included in the state's measuring its annual progress.

And once again, the Alexander-Murray reauthorization affirms its limits to the secretary's power (pg. 54-56):

''(5) PROHIBITION ON FEDERAL INTERFERENCE WITH STATE AND LOCAL DECISIONS.--Nothing in this subsection shall be construed to permit the Secretary to establish any criterion that specifies, defines, or prescribes--

''(A) the standards or measures that States or local educational agencies use to establish, implement, or improve challenging State academic standards, including the content of, or achievement levels within, such standards;

''(B) the specific types of academic assessments or assessment items that States or local educational agencies use to meet the requirements of paragraph (2)(B) or otherwise use to measure student academic achievement or student growth;

''(C) the specific goals that States establish within State-designed accountability systems for all students and for each of the categories of students, as defined in paragraph (3)(A), for student academic achievement or high school graduation rates, as described in subclauses (I) and (II) of paragraph (3)(B)(i);

''(F) the specific weight or specific significance of any measures or indicators used to measure, identify, or differentiate schools in the State-determined accountability system, as described in clauses (ii) and (iii) of paragraph (3)(B);

''(G) the terms 'meaningfully' or 'substantially' as used in this part;

''(H) the specific methods used by States and local educational agencies to identify and meaningfully differentiate among public schools;

''(I) any aspect or parameter of a teacher, principal, or other school leader evaluation system within a State or local educational agency; or

''(J) indicators or measures of teacher, principal, or other school leader effectiveness or quality. [Emphasis added.]

I'm liking these limits on the US secretary of education.

In the Alexander-Murray reauthorization, assessments continue to eat up a notable portion of state education budgets. However, the language allows for states to seriously reduce testing time from that which is required of the Common Core State Standards (CCSS) consortium tests.

And as was true of NCLB, in the Alexander-Murray reauthorization, states must agree to allow students in grades 4 and 8 to participate in the National Assessment of Educational Progress (NAEP) every two years, with the federal government paying NAEP costs.

Regarding "consortium developed" standards and assessments, the Alexander-Murray reauthorization notes the following:

''(1) IN GENERAL.--Nothing in this section shall be construed to prohibit a State from entering into a voluntary partnership with another State to develop and implement the academic assessments, challenging State academic standards, and accountability systems required under this section.

So, states can decide to "go consortium," but the federal government will not require it- in any form. And just to be sure(pg. 86)

''(2) PROHIBITION.--The Secretary shall be prohibited from requiring or coercing a State to enter into a voluntary partnership described in paragraph (1), including--

''(A) as a condition of approval of a State 12 plan under this section;

''(B) as a condition of an award of Federal funds under any grant, contract, or cooperative agreement;

''(D) by providing any priority, preference, or special consideration during the application process under any grant, contract, or cooperative agreement. [Emphasis added.]

Again with a resounding NO to Duncan's waiver-wielding.

For further reading on the details of the 601-page, Alexander-Murray reauthroization released on April 7, 2015, see my other five posts in the series:

Part I originally posted 04-07-15 at deutsch29.wordpress.com