For the past few weeks I have been writing about Artesia High School in Southern California and the remarkable improvement the school has been making over the last 12 years. Today, I'm focusing on the principal who has led that improvement. 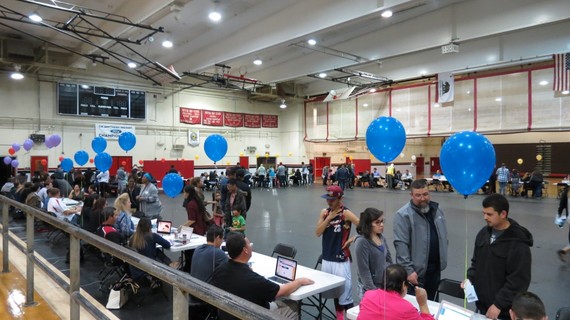 When I first began visiting high-performing schools with large percentages of students of color and students from low-income families -- I call them "unexpected schools" -- I didn't know what I would find.

Today, after visiting dozens of such schools, I know to expect a principal who builds a culture of respect and high expectations, and builds the leadership capacity of teachers and staff members.

Artesia wasn't always high-achieving, and I wrote in previous columns about the improvement process it has undergone over the past 12 years. (See here and here and here.)

Teachers who have been there since before Sergio Garcia are very clear that he was the driving force behind the change.

"We had a principal who didn't believe our kids could learn," said math teacher Sharon Pollock about the previous principal. "Sergio sets the tone that our kids can."

Part of the reason the teachers say Garcia has been a good principal is because he supported their need for an orderly school. "Years ago, we had gangs in the yard intimidating people," said Gerry Ellis, chair of the physical education department.

They recognize that he has set up systems -- such as scheduling -- that allow teachers to develop systems of instruction that are common through the school, including the way data is developed and shared, lessons are planned, and progress is tracked. "We're all together in making those choices," said Will Napier, chair of the department of special education and one of two union representatives in the school.

Garcia's respect for the role teachers play may in part be because Garcia was himself a teacher, first of physical education and then of social studies. "You shouldn't put someone in this desk who wasn't a good teacher," Garcia said.

He believes that teachers have a "deep need to be successful." He considers it his job to put the systems in place that allow teachers to be not just successful but "masters of their own destiny."

Gerry Ellis, agrees that this is what Garcia has done. "All of us are leaders. Sergio is an advocate for teachers and what's best for kids," said Ellis. "Sergio wants to make this school the best there is based on sound principles of research."

That doesn't mean everything Garcia did was initially welcomed by teachers. When he first opened up all the teachers' data to the entire faculty, it was a little shocking. Teachers had not been used to being held publicly accountable. "Now, the teachers won't take anything less," Garcia says. "They have their own internal accountability clock."

Garcia's route to becoming principal was a little circuitous. He came to the United States from Guatemala when he was 14 to live with an older brother who had come years earlier and was serving in the U.S. Air Force.

He describes himself as not being a particularly engaged student. "As long as I got good grades there were no rules, so I got good grades." But he didn't find school difficult or compelling.

After high school he entered a period of aimlessness, taking a few college classes at different colleges and working as a substitute P.E. teacher in Catholic schools, but not really on track for a diploma. One day when waiting for a bus, a car ran through a deep puddle and drenched him in water. That was a sobering experience," he said, because it made him realize he was on track to never be successful enough to own a car. After that, he buckled down and got his bachelor's degree in interdisciplinary studies.

He went on to get his master's degree in curriculum and instruction in short order and then enrolled in Pepperdine University's doctoral program in educational technology. Finally, he had found himself in a program in which he actually had to work hard, read extensively, and immerse himself in research that he has found useful as a principal. (He has been "all but dissertation" for 10 years.)

He is quick to say, however, that "I don't think any of the degrees fully prepared me to be a principal."

What really helped him, he said, was being mentored by two administrators in Long Beach, California, where Garcia taught and became an administrator. The first was an assistant principal whose "caring for disadvantaged kids was matched only by his knowledge of schools." The other was a principal "whose leadership style I stole from the moment he hired me."

Next week: If principals like Sergio Garcia are what we need to transform our schools, where are we going to get more of them?