When I saw these numbers I was intrigued:

These were the metrics for Artesia High School in Los Angeles County. Looking at the numbers, I wondered if the school had always been high-achieving. 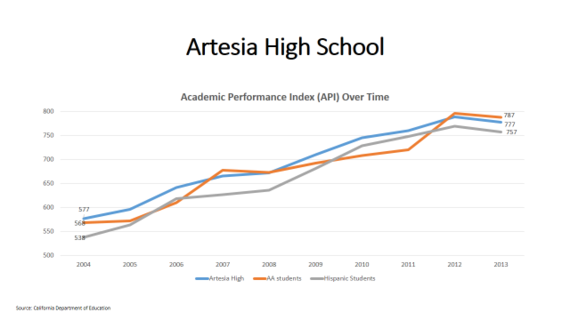 In 2004 Artesia High School's API was 577, which meant there wasn't a lot of learning going on there.

In 2013 the school's API was 777, a score comparable to those of much wealthier schools in the state.

That improvement -- 200 points in eight years -- represents a remarkable growth trajectory, particularly for a school where so many students come from low-income families, and where almost 40 percent of students do not have English as their first language.

He took the job as principal almost 12 years ago, mostly because he wanted to work close to home while his kids were still young. He thought that cutting down on his commute would make his life easier. He was wrong.

Before even starting to work there, he toured the school and saw "five fights in a short time." His first thought, he remembers, was: "What have I gotten myself into?" His second: "I can really help this school."

In classrooms, he said, "I saw really good teachers. But they were working in isolation. I brought them together so they could work hand in hand."

Talking to Garcia made me realize there was a rich story to be told about Artesia, so I traveled to Los Angeles to see it for myself. I saw a calm, orderly school where students were debating climate change, writing about To Kill a Mockingbird, conducting forensic investigations, and calculating the force needed to push a piano up a ramp. In other words, I saw students learning -- and teachers teaching -- all within a culture of respect.

The two descriptions of the school I heard most from students were "fun" and "safe," and I couldn't find a student who didn't plan to go to college. In fact, the goal is for 100 percent of students to at least apply to college -- and the school was very close to meeting that goal when I was there.

Getting from where the school was back in 2004 to where it is now was a long journey. It required some real know-how by educators who understand both instruction and the systems necessary to improve instruction and who recognize the power they have to change young people's lives. "I believe the way to create a better opportunity for my students is through an education," Garcia said. "For my kids, it's life and death."

For the next couple of weeks, I'll be reporting on different aspects of Artesia's improvement. Like any story of school improvement, Artesia's is complex and idiosyncratic. But it still holds lessons for other schools.

For now, though, let me just say why I was looking at Artesia's numbers to begin with. Artesia is part of the ABC Unified School District, a combination of three smaller districts in Los Angeles County not far from Compton. It is mostly a white, moderately wealthy suburban district, but it has a small number of schools where most of the students qualify for free or reduced-price meals, and where most students are of color. In 2013, my colleagues at Ed Trust-West identified ABC Unified as the second-top district in improvement for low-income students, which piqued my interest.

This spring I looked at how the district had performed on the new Smarter Balanced assessments, given for the first time in spring 2015.

ABC Unified District performed better than the state as a whole, but, more interesting to me, Hispanic students, African American students, and students from low-income families performed much better than their counterparts in the state. That led me to look deeper at individual schools, and that's when Artesia's data, which really stood out, caught my attention.

It is a high-poverty school that performed as well or better than the state in both reading and math, which led me to search for those numbers that I started this column with.

I realized that it was a story worth telling.

Next week: Tackling the culture and climate.