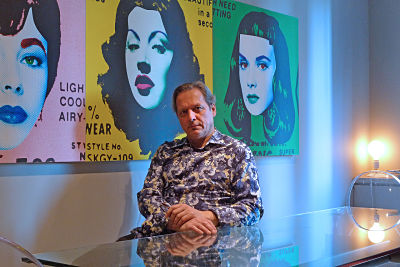 A few weeks back, to much acclaim, The Rolling Stones re-released their seminal Some Girls album. As John Carucci reported here, the new edition comes as both a double disc and box set, and includes a slew of songs that were intended to be the original LP, but got cut due to time restraints. In fact, Stones guitarist Keith Richards said rushing to market was "the same as cutting off your baby's head."

But added tracks, as kickin' as they may be, aren't the only story behind the Some Girls re-release, which is wrapped in the very same sleeve that caused such a stir way back in '78 and remains a bone of contention between its co-creators, Peter Corriston and Hubert Kretzschmar. Now that the head's been put back on the baby, song-wise, perhaps it's time we put to bed the issue over who did what with the notorious sleeve.

First, whose idea was it to use the wigs and the cut-outs?

I had been working in the mid '70s with a collage technique that used fragments and bits and pieces of heads and combinations of different elements, while Peter had been working with dye cutting in print production and similar production-related technology previous to this. In this case, it was Peter who brought the wig ads from Jet magazine, and we experimented with various combinations of content.

We used material from various sources in this case. Publicity pictures from entertainment tabloids were one source. Publicity stills of movie stars, and Hollywood press material came from my end. As with many commercial projects, it is often a collaborative effort and sometimes one idea builds on another.

At what point did you come in on the project?

I had come to New York from Germany straight from art school and was showing my portfolio with illustrations to art directors and designers here in the city. When I met with Peter, he was working on creating a corporate identity for a new record label called Infinity Records, for which I ended up creating the logo and quite a lot of publicity-related artwork; and Peter had just gotten a call from Jagger in Paris for a packaging project called "Lies."

Did you do much tweaking of Corriston's original idea?

My knowledge of retouching and collage was for sure a valuable contribution to the look of the project. If you look at the early sketches for the cover you can get a rough idea of the concept, but using all the graphic elements together with the type created a way more effective piece of art. I think that we had a similar aesthetic that complemented each other's ideas and contributions.

So is it fair to say that you took Corriston's initial idea and ran with it?

In the case of this particular package, I think I managed to have all the elements push convention, and gave them a certain twist. When you look at the evolution of an idea and its technical refinement, only in very few cases is it possible to say with certainty, "There was a fork in the road and so-and-so made a left turn and that led to such-and-such an outcome." In the case of Some Girls, I have revisited and reworked my own archive a few times and expanded on the original concept.

Would you remind us what kind of reception the artwork got once the record was released?

It was very successful and had quite an impact for its bold graphic look. Aside from the objections of some of the females that ended up being taken off the cover. An interesting little tidbit: I have been told by one of Andy's assistants, that Warhol was quite in awe of the cover and artwork when it came out!

Who took the brunt of the blame for the controversial images?

I think the label and the band got equal blame. You must remember that at that point in time the boys were infamous for their public stunts. Jagger was having an affair with Margaret Trudeau, the prime minister's wife, and Keith had been arrested in Canada for drug possession. So some of the ladies felt that they did not want to be associated with them.

After the sleeve was recalled, who handled the subsequent re-imaging?

Placing color rectangles over the offending characters was supposed to have been a temporary solution. But there were quite a few females in the limelight that wanted to be "Some Girls" and on the cover -- Linda Ronstadt, Carly Simon and Britt Eckland being among them. I prepared a version that was supposed to be used as a replacement inner sleeve, but that was not utilized after the album had chart-wise gone through the roof.

Did The Stones have much input with either the initial art or the re-issue?

On all covers that I worked on for the band, Mick Jagger had final approval, but gave us pretty much total freedom in the creation of the artwork.

Why weren't you credited on the album?

This is something that I file under "lessons learned" and can only explain with my relative youth and inexperience at the time: for not being insistent enough, and for assuming that there is such a thing as fair play in business when working with professionals. My work on Emotional Rescue and my contribution as the photographer of the cover of Tattoo You in 1983 has also not been credited in print. I did receive credit on Undercover, for which I did all the art.

The Hubert Kretszchmar: Some Girls Interview can be read in its entirety here.