"What's the original origin of religion?
Is it teleology? Agency detection?
Theory of mind, or anthropomorphism?"
(Baba Brinkman, "Byproduct to Benefit") 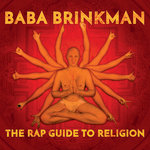 There's a point in every college professor's life when you come to the end of your skills. And when, like me, you're teaching religion and science, it's then that you let Baba Brinkman's raps take over. You see, my class was exploring the topic of evolutionary approaches to religion, and I intuited via theory of mind (more on that later) that my students' attentions were slipping out of my grasp--at that moment, they were treated to excerpts from his new album, The Rap Guide to Religion. And although I suspect that Brinkman didn't write raps for college courses, or at least that these would provide his bread and butter, he does a remarkable job of presenting the ideas we read in the classroom: namely, those of Charles Darwin, Richard Dawkins, Daniel Dennett, Christopher Hitchens, David Sloan Wilson, and Pascal Boyer, to name just a few.

So, since I blog about science and religion, why not comment a bit about Baba's brinksmanship? He's trying to take rap to the brink of its maximum content capacity. Does he succeed then in bringing evolutionary thought in its multifold forms--part of which, in his mind, is an attendant atheism--via the medium of rap? (By the way, in posing this question, my primary point in this post is not to decide about the truth of his conclusions, but how well he communicates it.)

First of all, let's start with the beats
In fact, this is sine qua non of all rap music. At the end of the day, it has to succeed on its beats. You gotta like the groove above all else. Full disclosure: though I know a bit of Kanye and Jay Z (Brinkman confesses, "I tend to believe what Jay Z says"), I'm no rap specialist. Nonetheless, I've been a percussionist for more decades that I might admit under oath, and I do know beats. Brinkman's are definitely solid. They aren't as textured perhaps as Frank Ocean, who somehow makes drum machines sound humanly quirky and creative, but they create some sweet pulses for his complex messages. There are times when Brinkman seems to default to syncopated sixteenth notes, as in "Religion Evolves." That groove allows for some nice tension and lots of spaces to drop in syncopation. But it gets hackneyed. When he moves out of that groove, there's an evolution of rhythm--as in "God of the Gaps," "Byproduct to Benefit," and especially "Spread." These all have nice swing to, and the latter with some homage to the 70s, offers a lilt that leads to a sick groove.

Second, the tone
The origin of Brinkman's concerns about religion is reasonably clear. And this defines his general vibe (as presented in "Religion Evolves"),

Out of this mission, there's also a certain attitude and aggressiveness about his music. I know that comes with rap, but at the same time I can't help but feel he's mad at "religion" (honestly, a term that's too broadly defined). Thus he's more of an anti-theist. In fact, in fact, in his final declaration, "Neighborhood Atheism," he declares

"I used to call myself an agnostic
But that was just me bein' politically correct."

OK, an unguarded reaction for a moment: Really? Fear of labeling yourself an atheist? Where is all this atheist "persecution" that he and Dawkins promote? In the academic circles I run in--not to mention secular Northern California--this sounds a bit whiney like the flip side of the putative "war of Christmas."

But I'll suspend disbelief and "feel his pain." His emotion leads to a message in which Brinkman seems to channel some Eminem--a sort of angry confrontation. Which has its place in the genre, to be sure. But there's not that light touch and elevation of the spirit that Macklemore brought to his public and at that time countercultural declaration in "Same Love." This might explain something in his voice and annunciation that emerged when I did a little unscientific research with rap connoisseurs in my inner circle (who may or may not be a part of my family). They thought he was a little too precise, didn't let enough syllables slide (my language, not theirs). And maybe that's because he has to communicate too much for the medium. (The comparison I heard was with G-Eazy. Listen and you can decide. As I already confessed, I'm not rap specialist.)

Third, the problem
In his TEDxSMU talk, Brinkman joked that his raps--presented first as entertainment for a conference of evolutionists in academics. He quipped, "I have a hip-hop show that's peer-reviewed." But "peer-reviewed" rap music? The joke reveals the problem: Who's the audience? He seems to need to do a lot of explaining. Maybe a bit too much. In "Sapiosexual" (in other words, being wise about sex), this line appears:

"why is sex fun?
That's what I think about when orgasm hits.
I'm like 'unnhh' that's gotta have adaptiveness."

This doesn't seem like the future for rap glory or of good sex for that matter. I wonder, for him, how this will compete (and Brinkman loves the competition implicit in some evolutionary thought) against explicit sex, copious drugs, enormous amounts of Crystal champagne, and general "bling"?

More than that, if his target market is emerging adults--those 18-30--then there's some fairly provocative demographic data. Yes, indeed about one-third of this demographic check the box "None" when asked "What is your religious affiliation?" But that doesn't mean his segment isn't atheist (that's much smaller)--probably more "spiritual, not religious." And even closer to the point (and I do have one): Though about two-thirds believe that the general tone of the public discussion between religion and science is conflict (behind paywall), about that same amount, when asked how to relate the two "for me," prefer independence or even collaboration (also behind paywall). In other words, emerging adults hear about conflict, but they seek something else, something kinder and gentler. Thus, I wonder how broad is the appeal of all this complex evolutionary rap on religion.

Fourth, the irony of his effectiveness
Brinkman's a good, clear thinker, and he places an enormous load of thought on the backs of rap music. In "Sapiosexual," he tells us "Your brain is a promiscuous explanation seeker." At least his is. Always using evolutionary tools to explain our behavior and to explain away religion. In this mission, he's able to communicate a surprising amount--something he's already accomplished in his rap on The Canterbury Tales. (Yes, all this should sound like an oxymoron.) And here's the weird thing: his songs aren't necessarily any less thought-provoking than what Dawkins or Dennett or Hitchens can do in all their eloquent discourses. Brinkmam's mission may be oddly counterproductive: If the arguments of evolutionary atheists can be rendered as effectively through the medium of rap as through books upon books of prolix prose, maybe there's not that much more to the latter. Are all the Four Horsemen of "New Atheism" simply loquacious sloganeers?

The second irony is much simpler. The music is content heavy, and ironically, it reminds me of early "Jesus People" Christian music (let's say, Larry Norman or Keith Green) that had a message, more than music, to communicate. And sometimes the musical camel sagged under the weight of the evangelistic baggage.

Finally, a surprise at how often he succeeds
And so I celebrate how much he's able to communicate. I wonder if he's not channeling some of the homiletical power of his great, great grandfather Andrew Murray, a missionary to South Africa that expounded on the intricacies of Calvinist theology. (See the track of the same name). It's what Robert Ingersoll and Friedrich Nietzsche did, as scions of pastors--they inverted the rhetorical gift and invoked divine absence rather than presence. And that very ancestor Reverend Murray produced 240 books. Maybe that's one more explanation for all of Brinkman's explanation.

In listening to The Rap Guide to Religion, I come away impressed by how much Baba goes to the brink and succeeds. Take, as one final example, his "Theory of Mind." (I told you I'd return to this theme.) The lyrics work. Theory of mind is what neuroscience describes as the human ability to know that others are also thinkers. Take his explanation of autism.

Which, as he continues to rap, leads to a tendency to "think of god as an essence"--and thus indifferent--so that ultimately a higher percentage of autistics are atheists. All this is backed by excellent research. (I first heard it from Emory professor Robert McCauley.)

There's so much more to this record than I can comment on in one post. So I close here. When my theory of mind figures out that my students are spacing out--that's when Brinkman's rap will reappear in my religion and science class next fall. (That is, sometime just before the Christmas season.) This, if nothing else, leads me to conclude that I appreciate, at times question, and often find myself enjoying, the skill of Baba's Brinksmanship.