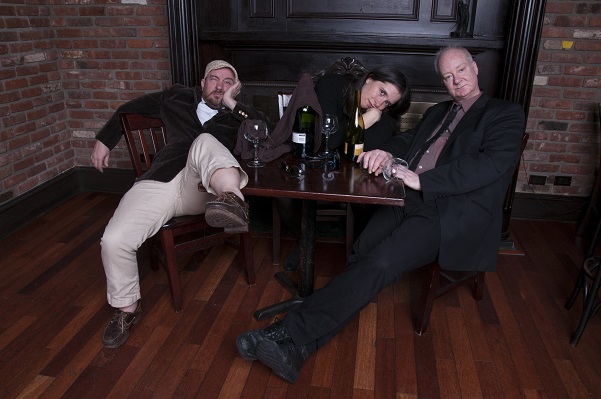 Dormant since 2002, Future Bible Heroes (Merrit's synthiest and arguably clubbiest project) recently returned this summer with their third album, Partygoing. The new release mixes wry rompers like "Keep Your Children in a Coma" and "Living, Loving, Partygoing" with icy laments like "Sadder Than the Moon" and "Digging My Own Grave." The pervasive mood is like the last glass of whiskey you have after returning home alone from a blurry night out.

Even diehard Magnetic Fields fans might not be versed in Future Bible Heroes and their Cole-Porte-meets-Human-League charms. Partygoing is a canon entry in its own right, but much like Return of the King, it becomes even more exciting when taken as the end of a trilogy.

For those who care, this is my third shot at an interview with the famously lugubrious Merritt. The first was a phoner during my tenure at the Washingon Blade, and the second a famously awkward three-part, 25-minute video interview during my tenure with The New Gay. In the latter, Merritt advises young musicians not to come out, and I squirm around like an earthworm playing Dance Dance Revolution. Watch at your own risk.

This interview was conducted July 12 via phone.

Zack Rosen: Why did you pick now for bringing back Future Bible Heroes?

Stephin Merritt: It was supposed to be a while ago. It's just taken a long time to make this record. Other things kept happening, and I kept having more ideas for songs that needed to be on the record that then pushed other songs off the record. There are quite a backlog of songs that were once on the record but now are not. We had 26 songs in various degrees of being finished.

Rosen: When was it originally going to come out?

Merritt: Claudia started being mad at me that I didn't have a release date in 2009.

Rosen: That's still seven years of dormancy. What brought it back?

Merritt: I always wanted there to be three Future Bible Hero records. There's a Softcell quote, "Every band should have three records. No more than that." Two seems the wrong number of records.

Rosen: Did this precipitate you bringing synths back into Magnetic Fields?

Merritt: We were always doing a "no synth trilogy," but with Future Bible Heroes we always started with synths. Having a Future Bible Heroes album without synths would probably mean that instead of synths, we'd be using samplers. So in that case why not just sample synthesizers? You wouldn't be able to tell. Kind of a technical point.

Rosen: How will it be to have this project tour without you?

Merritt: I'm greatly relieved not to be on tour. I'm in fact out of town and living in a B&B in Cambridge and doing this piece where I sing in front of a ukelele and a few bells. There's no microphone, no PA, no speakers. Other than lighting, no electricity. It's quiet, and it doesn't present health problems for my ears.

Rosen: You won't be missing performing those songs live in front of an audience?

Merritt: I've now been to two shows of them performing live. I've always thought live music was a necessary evil, but it's more fun to see it than to do it. If you're in the audience, you can always get up and go to the bathroom, but if you're on stage you can rarely do that. The problem is that I'm always in a rather conservative band situation where I can't just take a crap on stage. The kinds of music in which I could are of a pretty limited field.

If I started taking a crap onstage, I'd probably expand the appeal, or just get a lot press. I'm not a fan of playing live anyways, so I'm perfectly happy not to be on tour. This album would probably be relatively fun to play on tour. It's got a lot of humor in the lyrics, it's not obtuse. It relates to the audience on the perfectly ordinary level of "ah, this is funny."

Rosen: Does Partygoing have a theme like your other albums?

Rosen: I thought there was the theme of a party ending. Is there anything in our world right now that, to you, suggests a party ending?

Merritt: That's always been true. Some parties are always ending; others are beginning. I have a friend who was just telling me that he thinks he lived through the last decade, the '90s, when youth culture really had some validity and there was still a little bit of counterculture. I was saying, "Gee, I thought that was the '80s, and '90s were completely sold out." He glared at me when I said that. I think if you're a certain age, you think the party is just beginning, and if you're another age, the party is just ending. Basically I think everyone experiences the party as beginning when they get there.

Rosen: How do you feel about the fact that you could theoretically get married in any state these days?

Merritt: I'll believe it when I see it.

Rosen: So you think some of our partying is a little premature?

Merritt: I haven't seen any of that partying going on. It hasn't been in New York. Nobody's going to marry me. I have a recording studio in my house. I have a drum kit where other people have a dining room. I'm not marriageable.

Rosen: So when you sing that "love is a luxury I can no longer afford," you mean there literally is not enough space in your apartment?

Rosen: Do you have any thoughts on the state of gay culture these days? I know that's very general, but I like hearing what you have to say on the subject.

Rosen: Would you still encourage young artists not to come out?

Merritt: It depends on what they want to do. If they want to become pop stars, as I always said, become one first, then come out, and you'll have much more influence on the world than trying to be a pop star while already being out, which is self-sabotaging. That is less true now than it used to be, but it's still somewhat true.

Merritt: I'm not big on having a favorite thing, so I--

Rosen: What was the song that was hardest for you to get out, to complete?

Merritt: "Living, Loving, Partygoing." It was one song, then became a different song. Originally it was an instrumental, like "Tequila" until they shout it, or my song "Threeway." It was first like that. I won't say what we shouted. It gradually turned into "Living, Loving, Partygoing." It has lyrics describing six actual parties that I went to. I think all but one of them are parties that more than one of us went to, parties that Future Bible Heroes have been to. The events taking place at those parties are not from those exact parties necessarily. The song is true, but all the events don't match up with the names of the people. Everything happened, but not necessarily at that party.

Rosen: Now I'm dying to know: What were you originally yelling?

Merritt: I will never tell anyone. Chris might tell you for money, but I won't tell.