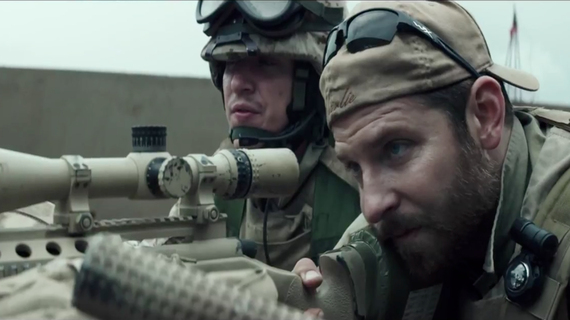 2. Eastwood, like all great filmmakers, takes no specific side in the telling of his story. He simply presents it, and then lets the audience draw their own conclusion.

3. It's a litmus test movie. This means, if you're basically an anti-war, peace-loving dove type (my camp), you'll see it as anti-war. If you're a bumper sticker thinking simpleton on either extreme of the sociopolitical fence, you'll view it as "a jingoistic, pro-war, anti-Iraqi, neo-Fascist propaganda film that Leni Riefenstahl would have been proud to call her own," or..."Yee-ha! Just like playin' fuckin' CALL OF DUTY: MISSION IRAQ, bubba! Let's get our .306s together and go kill some ragheads for reals! Oh yeah, and that Lanny Reefenbacher chick woulda had a kitten over this shit. It's awesome!"

4. Bradley Cooper gives the performance of his career, truly inhabiting the character of Chris Kyle in an utterly believable, three-dimensional way.

5. Excellent screenplay with perfectly drawn characters from Texas, where Kyle was raised, making very clear the values he was raised with and how it shaped him into the man he became. I grew up in Arizona with the same people. I know.

6. Amazing portrait of war as hell on earth and what it does to the human psyche, namely fuck it up beyond all recognition.

7. War isn't the fault of the soldiers who fight it. We should have learned that lesson with the disgraceful way we treated the men who came back from Vietnam.

8. If it reminded me of another film in particular, it would be William Wyler's The Best Years of Our Lives, more than Saving Private Ryan or Platoon.

9. Clint Eastwood is a national treasure.

10. It's not the "definitive film about Iraq," mostly because it was about war in general, as opposed to Iraq in particular. It I had to choose one theme for American Sniper, it would be "War is war. It never changes."

11. In my opinion, Chris Kyle was a hero, regardless of what his politics were, how many un-PC adjectives he might have used, or the fact that he fought in a war that I didn't agree with.

12. In order to maintain some semblance of sanity in the heat of battle, you must grow to hate your enemy. It's absurd to think that the rules of civilization can be applied to something that, by definition, is uncivilized. To think anything less is childlike in its naiveté.

13. And finally, do yourself a favor, and see American Sniper. Judge for yourself.