Last week I did the unthinkable -- I washed Sienna's security scarf. I have to admit it was tough and I did everything possible for Sienna not to see that this colorful piece of fabric she appropriated from my wife go into and out of the laundry basket and washing machine, but toddlers either have a sixth sense or better eyesight than any creature on the planet because they notice the slightest feint of hand. Seriously, I don't know why people bother to hire magicians for children's birthday parties because from my admittedly limited experience, toddlers tend to catch every little trick you try to pull on them.

I know I was in the other room, but Daddy, I saw you put medicine in my orange juice. I ain't drinking it! I'm not even going to try it! In fact, I'm just gonna say, "No!" repeatedly!

You think I wouldn't notice that Little Green Monkey was missing from the enormous pile of stuffed animals on my bed even though I haven't played with him in a month? Think again! "Green monkey?? Little green monkey??"

I love doing laundry with you, Daddy, but did you really think I wouldn't notice my security scarf was in the wash even though you took it without me looking and buried it like a prisoner trying to escape the big house? "Scarf? Scarf?? SCARF???"

Who knows how dirty the scarf was when I decided it was time for a wash? She drags it around the house and outside on the sidewalk and through the grass and sand and dirt at the park. People see her in her stroller and call her a "fashionista," but little do they know Sienna and her scarf are nearly inseparable. She sleeps with it every night (the one time she went to sleep without it, she woke up in the middle of the night crying out for it).

And so Sienna begged for her scarf for 32 solid minutes while the machine rattled and shook, sucking out all the pollen and cat hair, the dirt and grime, the saliva and snot, the tears and food stains. And after those agonizing 32 minutes ended and I unloaded the washer, I was forced to extend Sienna's torment because the scarf is too delicate to go in the dryer, so I had to lay it out in plain sight while it air-dried.

"Sienna," I said. "Scarf needs to dry. I'm sorry but you can't have it yet. As soon as it's dry I promise I'll run over and drape you in it."

But the little girl's answered me with tears and wails for "SCARF!!!"

And so I did the best thing I could: I spread it over her high chair, thus leaving it low enough for her to touch, but high enough for it to dry . It took a ton of effort and continuous explaining to prevent Sienna from ripping that wet scarf from the chair, but she finally gave in and stood there, sucking her thumb and holding her security scarf with a combination of desperation and contentment. 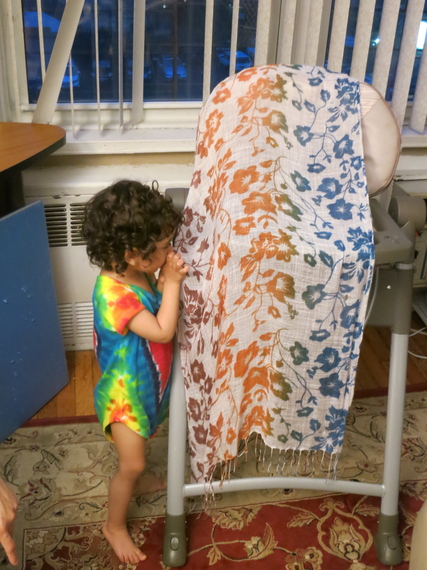 What is it about this scarf that calms my daughter so? Why does she find such solace in it? Why does one thing call out to a toddler more than another be it a doll, a stuffed animal or a scarf?

I'm no stranger to security objects. When I was a kid I remember loving a gray stuffed dog. That poor thing had so many surgeries it looked like Frankenweenie. I think I also had a blanket. Actually, I'm pretty sure my parents one day stole it from my bed when they decided I was too old for it, hoping I wouldn't go ballistic. I don't think I did. I don't recall why I loved either the dog or the blanket.

Even today I don't feel comfortable unless I'm wearing my Yankees cap (and it has nothing do with the Yankees), though this one I understand -- I even blogged about its import.

I don't have any problems with Sienna loving this scarf, but I dread the next time I must take away such a precious thing to wash it because as a parent, it hurts me to see my daughter so anguished. I just find it fascinating that she chose this scarf as the object that makes her feel safe and wish I knew why, a wish that will most likely go unfulfilled.

So let's hear from you. What are your children's security objects? Do your kids go nuts when they have to be washed? How many operations have you had to perform on a beloved stuffed animal or a delicate scarf?

More:
Toddlersparents-toddlersraising kidsKidsparents-dads
Newsletter Sign Up
Raise the kind of person you'd like to know
Subscribe to our parenting newsletter.
Successfully Subscribed!
Realness delivered to your inbox