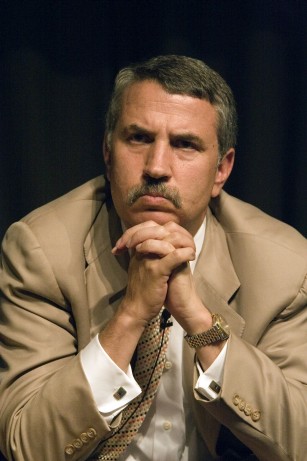 Tom Friedman has been doing great work on green issues for a while now, certainly given them a higher profile than any mere green blogger could. So I guess he's owed some latitude. But his recent column is just an outright nuclear disaster: head-slappingly wrong on the merits, politically naive and tone deaf, and timed so poorly as to be malicious. Just about every single sentence is a train wreck.

Start with timing: next week, Congress begins an intense round of hearings on a comprehensive Democratic energy/climate bill. Not some pony plan from a columnist's daydream. Not an obscure bill introduced by a backbencher to make a symbolic point. An actual, serious piece of legislation: the bill Democrats on the relevant committees will sign off on; the bill Obama will support; the bill that will go to the Senate; the bill that could, if everything goes well, if everyone in the progressive coalition rallies behind it to generate overwhelming political pressure, become law. If you are serious about wanting energy and climate legislation in this Congress, this is your chance. No other. The game is underway.

So now, on the cusp of an enormous fight against dishonest and well-funded proponents of doing nothing, Friedman decides it's time for "an alternative strategy, message and messenger"? Are you f*cking kidding me?! The only conceivable effect Friedman's endorsement of an alternative bill can have is to divide support and distract attention from the best chance for a serious energy/climate bill in 30 years. His timing could not possibly be worse.

I'm sure Friedman would respond that hey, he's not a Democratic operative. He's an independent thinker. He's under no obligation to stump for a bill that doesn't make his mustache tingle. And in this he's like all progressives. They all want to be the Smartest One in the Room. None of them want to sully their purity by compromising or rowing in the same direction. They all want to show how you clever they are, how their pony plan, their messaging, their strategy is the one those silly legislators ought to be using. Meanwhile, the coordinated opposition kicks their ass, over and over again. But at least they're clever!

Secondly: the bill that's heading into hearings next week is a comprehensive effort to address energy/climate issues. It's got major, history-making provisions boosting clean energy, accelerating energy efficiency, and upgrading the national electricity grid. It sets standards for fuels, for electrical generators, for appliances. It's 600 pages long, and about a fifth of it is devoted to the carbon cap. And that's deliberate. Dems are well aware that the clean energy, energy security, green jobs, and economic renewal messages are their strongest. They know the carbon stuff is wonky and unpopular. So they put everything together in a big plan, in order to put the strongest messages up front.

Yet Friedman says the Dems' message is all wrong because ... they're focused too much on the carbon cap. Why aren't they clever like Tom Friedman? "That is why our energy policy should be focused around 'American renewal,' not mitigating climate change."

Who's focusing on the carbon cap here? Whose calling it the "center" of the Democrats' plan? F*cking Friedman is! Did he even read the damn thing before squeezing out this turd of a column?

I have read the following sentence probably 50 times, and I cannot make one tiny lick of sense out of it:

Since the opponents of cap-and-trade are going to pillory it as a tax anyway, why not go for the real thing — a simple, transparent, economy-wide carbon tax?

Got that? Opponents of the carbon cap think they can kill this bill by calling it a tax. So the obvious political strategy for the bill's supporters is to.. make it a tax! Because Tom Friedman said so!

Why should that be anything but batshit insane as a matter of political strategy?

Oh, well, it's because of this new requirement for federal legislation, the one invented especially for one of the most complicated sets of interlocking problems in the nation's history: it has to be easy to explain to your grandmother. The tax code? Medicaid? Military budgeting? All that stuff can be complicated. But dealing with energy and climate has to be done via legislation that can be summarized in a Tweet. Because "people won't support what they can't explain." Tom Friedman said so.

And of course, for a plan to be even minimally credible, it has to be complicated. So Friedman supports a bill with a "simple" tax that would rise automatically unless an independent board determined that emissions were no longer on track for the target in which case the tax would be adjusted and also there would be a tax assessed at the border for imports based on their carbon content (which would be determined how?).

According to Friedman, "people get that." People don't "get" cap-and-trade, especially when it's characterized inaccurately as "a firm in London trading offsets from an electric bill in Boston with a derivatives firm in New York in order to help fund an aluminum smelter in Beijing." That's what cap-and-trade is "all about"! Even though it's bullshit.

And best of all, "Americans will be willing to pay a tax for their children to be less threatened." This is flatly asserted without a scrap of empirical evidence, indeed in the face of virtually all the available polling and the experience of the last three decades of American politics. But it's true. Because Tom Friedman says so. He knows Americans. He talks to them in taxis.

Of course, no Friedman column is complete without an appeal to the notion that people will fall in line if they are told what to think by a manly man. That's what people understand, remember? "Suck. On. This."

So Friedman wants Gen. James Jones to ride in on his heaving, manly Steed of Testosterone save us poor environmentalist damsels in distress. Jones could make the case because he's "imposing," and military, and he makes Friedman tumescent.

A military man in charge of coordinating defense policy could sell a huge and significant piece of domestic policy. Because Tom Friedman says so.

And finally! Friedman says the Dem bill "hides the ball" because it's not explicit about the price put on carbon. But this obsession with price misses the point. The price is not the ball. The cap is the ball. And that ball is right up front.

The price is unknowable in advance, since no one knows what it will end up costing to achieve the cap targets. So there is by definition no way to be transparent about the price before the fact. That's why all these "simple, transparent" carbon tax bills sneak in a provision whereby they're constantly adjusted based on progress toward ... a cap. So the price is adjusted by Smart Bureaucrats instead of markets. This is better, because a marine can explain it to your grandmother.

Somebody needs to hide Tom Friedman's ball. Because when he plays with it in public like this, he does real damage to the most important legislative effort of our generation, at exactly the time it most needs support.