Thinking back to my childhood last night, I scoured the recesses of my fuzzy memories to retrieve a list of my male heroes and role models, five of which spring to mind:

Indiana Jones: To me, Indy was the quintessential action hero. Witty when necessary, but more often than not, only as verbose as he had to be, Indy exemplified a balance between intellectualism (archaeology professor by day) and brawn (treasure hunter on the side). We saw Indy get hurt, both emotionally and physically, which made him human in a way that other action heroes failed to achieve, and somehow, as a child, that quality made me believe in him. More to the point, I believed that a pursuit of intellectual prowess would eventually lead me to live a life like his.

James Bond: As a child, I wanted nothing to do with Bond's womanizing ways; for that, I had no desire. I wanted his toys. Bond had a way with gadgets that made me want to be inventive. I rigged up fireworks on my skateboard and oil reservoirs that would squirt from the back of my bicycle, you know, just in case I was ever being chased by a metal-mouthed Russian named Jaws.

Darth Vader: Yes, I was a bad guy sympathizer, and I still am to this day. Haunted by the shadows of his past and a Death Star tractor beam-like pull between family and exacting vengeance, Vader represented not only the dark side of the empire, but mine as well. Add to that the fact that, after baring his soul to his son and being rejected, only to have his son essentially save him through an act of forgiveness and redemption later on, Vader became one of my top role models. However, I'm still working on perfecting the art of the throat hug.

Hannibal, from the A-Team: Hannibal, for me, represented the qualities of leadership I craved most. Rather than leading with an iron fist (which, with his military background, would have been entirely plausible), Hannibal earned the respect of his team, and they followed him willingly. I desired his charisma, and, of course, to someday chew on a cigar while stating, "I love it when a plan comes together."

Sherlock Holmes: You didn't think I found all of my role models on TV, did you? One of the first novels I ever read was The Hound of the Baskervilles, and I soaked it in. The intellectual prowess with which Holmes solved mysteries fascinated me to no end. Between his artfully elaborate vocabulary, deerstalker cap and the ability to consistently shock even his closest mate, Watson, with deft deductions, I was certain that, someday, I would be the one solving the nation's most puzzling whodunit.

Now, as I look back, I can easily connect the dots. From Indy, I collected a sense of curiosity, as well as an insatiable passion for learning. From Bond, I gleaned cunning, trickery and a desire for justice. From Vader, I understood the importance of placing family over ambition before allowing that ambition to consume me from the inside. From Hannibal, I knew to plan ahead and expect the worst, all while relying on the ability of a well-chosen team. Lastly, from Sherlock, I learned to pay close heed to even the smallest of details, and more importantly, to what is not being said, because often times, we find our answers in the space between the words.

Where was my father? Why wasn't the closest man to me, in terms of proximity, among my top role models and heroes? Why didn't I feel his influence the same way as a nearly two-dimensional character on a cheesy 1980s television action series?

Therein lies the tragedy that all too many of us experienced.

Before composing this article tonight, I've stared at the following picture about a thousand times: 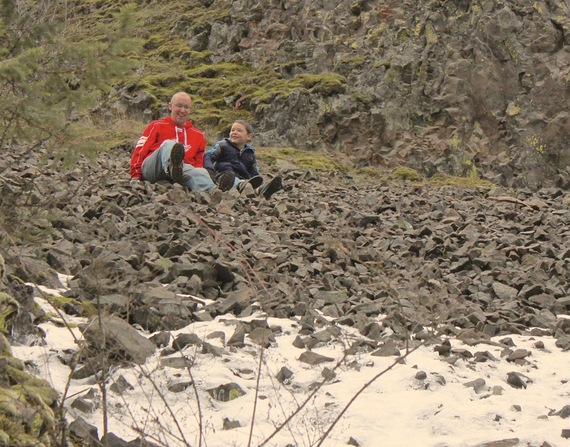 This is a picture of me and my 6-year-old son from our "adventure" (hike) that we took earlier today, and what has been captured here is more important than anything I've written to this point. We hiked up to the top of a basalt scree field, at which point, I introduced him to the joy of "scree running," or jumping up and landing in a seated position, feet outstretched, and sliding down the rocks. While it sounds painful and dangerous, I assure you it is not only fun and relatively safe, but also surprisingly comfortable. Imagine the feeling you get when you jump into a ball crawl, but make the balls in the pit a wee bit harder.

This photo that my wife captured freezes in time a moment that stuns me to my very core.

In this moment, my son looks up at me the very same way I viewed Raiders of the Lost Ark, A View to a Kill, Star Wars, The A-Team and the hallowed words of Sir Arthur Conan Doyle.

Suddenly, I realized that I have become someone my son can believe in, and even as I write this article, that realization brings me sobs of release. The demons and shadows of my childhood can finally be left to dust. Not only can I rebuild myself as a man through acts of mindfulness, but I can also build up my children to where they will never experience the feeling of being lost to the point where the only role models they can look up to are contrived in the minds of others.

Instead, through my presence, I can become someone my son can believe in.

Perhaps then, I can learn to believe in myself.

More:
HeroesRaising Boyschildhoodparents-dadsParents
Newsletter Sign Up
Raise the kind of person you'd like to know
Subscribe to our parenting newsletter.
Successfully Subscribed!
Realness delivered to your inbox