Most Americans understand that dogs and cats are individuals with personalities -- that they are someone, not something. At Farm Sanctuary, we provide lifelong care for more than 1,000 chickens, pig, cows, and other farm animals who were abused or neglected. We get to see firsthand how these animals also have personalities, interests, and individuality -- that they are also someone, not something.

But it's not just individuality that defines farm animals. Science has shown in recent years that pigs and chickens outperform dogs and cats on cognition tests. In her introduction to the groundbreaking book The Inner World of Farm Animals, Dr. Jane Goodall sums up the science on farm animal behavior, cognition, and emotion: "Farm animals feel pleasure and sadness, excitement and resentment, depression, fear, and pain. They are far more aware and intelligent than we ever imagined...they are individuals in their own right." And as Richard Dawkins rightly notes, evolution worked in other species just like it worked in us, so of course other species have emotion, cognition, and self-awareness, just like we do.

Dr. Temple Grandin, in Animals in Translation, writes that "when it comes to the basics of life... [other] animals feel the same way we do." She goes on to explain that both humans and other animals share the same core emotions ("rage, prey, chase, drive, fear, and curiosity/interest/anticipation") and "four basic social emotions: sexual attraction and lust, separation distress, social attachment, and the happy emotions of play and roughhousing."

We could have told you from our farms that chickens, turkeys, pigs, and all farm animals love to play and roughhouse, that they enjoy the company of one another and will become distressed when a good friend is taken away for a day at the vet, and that they mourn the loss of loved ones, just like elephants do -- as captured so poignantly in When Elephants Weepby Jeff Masson and Susan McCarthy.

One Farm Sanctuary resident who has taught us that farm animals have personalities is Nikki, a mother pig who was found on a levee during the Iowa floods a few years ago, exhausted and emaciated, protectively nursing her newborn babies and letting out cries of alarm when approached by rescuers. Nikki and her babies were kept together at Farm Sanctuary, and every night she continued to build a nest for them to sleep in. Now, Nikki and her babies continue to have a relationship that any human mother or daughter would recognize: There is both authority and friendship. She remains a gregarious and happy pig who enjoys socializing -- and who welcomes all guests to the barn with her loud voice. One thing that Farm Sanctuary guests learn right away is that Nikki remains extremely protective of her children, as you might expect from someone who had such a traumatic early experience with them.

Another example is June, who came to us from New York City after a cockfighting bust. When we got June, she had known only cruelty, and she had been accustomed to the fruitless task of attempting to save her babies and the babies of other hens from the cockfighting ring. For months after coming to Farm Sanctuary, whenever a caregiver entered the barn where she spent her nights, June's chicks were not in sight. But when their heads would pop out from under her wings or tail, she would scurry and tuck them beneath her -- even when they were too big to hide -- and then puff up her neck feathers and peck at anyone who tried to pick them up. She never forgot the abuse of human beings and the pain of separation. Until she died, after years at Farm Sanctuary, she continued to keep her children close. 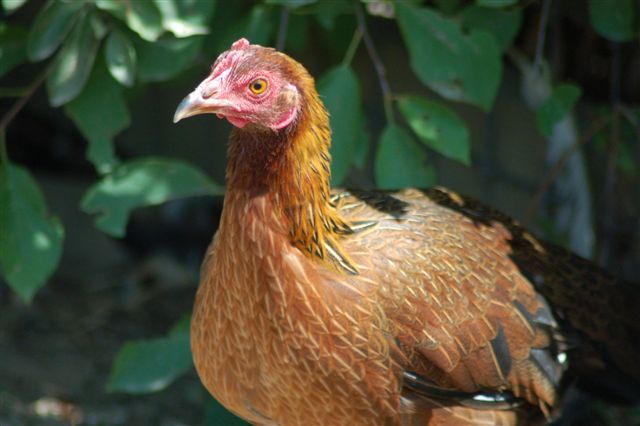 One interesting thing about farm animal science is that until the past few years, the hypothesis was often that animals would not be able to do what was being tested. Yet time and again, the animals proved the opposite. We now understand that farm animals can anticipate the future, delay gratification, dream, play, communicate with one another in complex ways, and so much more. As Dr. Grandin rightly notes, "[w]e don't know what animals can and can't do. The fact that we're constantly being dumbfounded by brand-new abilities no one had a clue animals possessed ought to be a lesson to us about how much we don't know."

Find out more about pigs' ability to play video games and use mirrors, chickens' capacity to delay gratification and navigate obstacle courses, cows' "eureka" experience upon solving problems and deep social bonds, and much more at www.FarmSanctuary.org/Someone.