While late to the news of Derrick Rose calling the New York Knicks a super team, the weekend was a necessary amount of time allotted to process this. Rose didn't entirely make it clear whether or not he truly believes the comment, if he was told to say it by James Dolan or if someone weirdly possessed his body not unlike Zuul and said those things for him. Given Rose's spotty history with intelligence I would lean very much towards the former and also feel bad to whatever PR agent twisted his ankle trying to rush to the stage and stop Rose from saying the words.

One can't blame Derrick for being ambitious. After all, he did once have a MVP trophy (I mean, hopefully he still has it somewhere, but otherwise the "current" honor has passed on), Joakim Noah was once one of the more feared big men in the NBA and Carmelo Anthony can still flat out ball when called upon (which is more often than not for these Knicks). Maybe, in the not too distant past these guys were a super team, right around when all of those Carmelo to Chicago rumors were circulating.

Things get a bit better when the stats get adjusted for 36PER, but that is a very faint silver lining for two players who struggled not only to keep on the court, but also upright. Big men decline and a notoriously steeper rate once they get on the wrong side of 30 and Derrick Rose is made of the opposite substance that is adamantium. Actually, if someone is making an Unbreakable remake or sequel I know who can fill in for Sam Jackson in that.

So why would he say those words that left his mouth and basically give everyone in the media material for the next few weeks?

Because nothing in New York makes sense, and perhaps in some sort of bizzaro-world reality these Knicks really are a super team. Maybe the MSG was built on some sort of cross dimensional portal that will warp center court into 2011 when things were good and Rose's knees weren't made of glass (although does that mean they'll also have to put up with injury riddled Amar'e?). Maybe it's just as easy as he feels really good about his body's structural integrity, but we've been here before. Maybe he's trying to please Melo on some sort of weird fan appreciation moment. Or maybe, Rose, like all of us hopes Kristaps Porzingis takes another giant leap in the future and becomes the Lithuanian version of Anthony Davis but somehow even scarier.

Maybe it's none of that. Maybe the answer is right in front of us and has been the whole time. We, the writers and the fans, worked diligently for the past decade to create this super team narrative, yet failed completely to set appropriate boundaries for what actually constitutes one. In a world where the 2014 Nets running purely on frailty and unbound capacity of Kevin Garnett's spirit are a super team yet a Kevin Durant/Russell Westbrook Thunder complemented by Serge Ibaka isn't, we have some problems. The San Antonio Spurs have not had a season where they won less than 50 games since 1999 and yet we still don't tag them with that honor. The system is out of whack.

Do you see what I'm getting at here? It suits us to paint these teams as either heroes or villains (mostly villains) for the good of the NBA narrative. LeBron going to Miami to team up with Wade and Bosh? Super team. Boston swiping both KG and Allen in their prime? Super team. Golden State revealing their plan for the death-star that will block out the sun and eat your dreams for breakfast? Super team. Russell and Kevin trying to bring a championship to the humble city of Oklahoma where they got drafted (Seattle fans already typing something up for me)? Nah.

The media is fascinated with easy labels that create compelling, albeit entirely familiar narratives. It's easier to discuss everything under a blanket terminology rather than explore the complex offensive schemes that Golden State chooses to run and how well Kevin Durant fits into that. How they will be able to unlock what I predict is going to be his best shooting year (and most efficient to boot, which if it reads like a beginning of some sort of Stephen King basketball-themed horror story, please don't look at his 2015/16 shot chart). 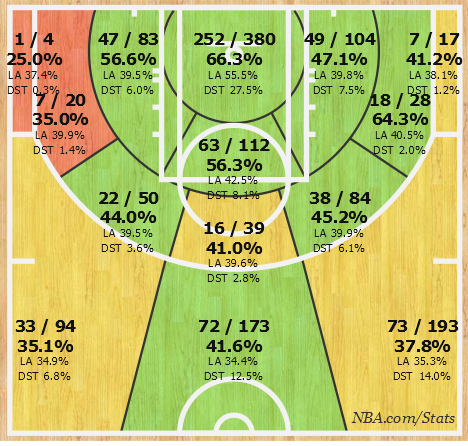 The players also buy into this narrative, and it's a lot easier for Derrick Rose to tell himself that he is part of something special than believe that the city that he's from, the one he had on his shoulders (and more often than not on his chest) for all of his NBA career has turned its back on him. The NBA is a cruel business. It has no space for sentiment or emotion. It's a business where you can be swapped out for an older and shinier version with the same "hometown hero" appeal in a matter of a week, much like Rose. What does it say when a team with absolutely no logical plan has no plan for you either?

So that is the narrative Rose is choosing, the pressure of it probably a lot less taxing than accepting his own fall from the NBA pantheon years ago. The one he bucked against with numerous comeback attempts and the one that was finally driven home with one trade. He took the narrative that we gave to someone else and embraced it for himself.

The Knicks are most certainly not a super team, although if we deemed the 2012 Lakers with Dwight Howard, Steve Nash and Kobe Bryant one, we at least owe them a consideration. We did this to ourselves, we handed Derrick Rose a joke we've written ages ago, a joke about 10 years in the making.