Hindsight may not always be 20/20 but, in certain situations, it can be revelatory. Think back 25 years to 1990, when two major Hollywood studios (Walt Disney Pictures and 20th Century Fox) had big-budget movie musicals in development. Despite being obvious labors of love inspired by a specific historical moment, both flopped at the box office yet went on to achieve cult status.

Budgeted at $40 million (and clocking in at 138 minutes), 1991's powerful anti-war film, For The Boys, became a beloved item in Bette Midler's filmography. In 2011, Aaron Thielen's musical stage adaptation of For The Boys premiered at the Marriott Theatre in Lincolnshire, Illinois. To my knowledge, there have been no subsequent productions.

By contrast, 1992's pro-union Newsies -- in which Trey Parker (the co-creator of South Park and The Book of Mormon) was cast as Kid Blink -- won the hearts of new generations. Thanks to repeated screenings of this $15 million movie musical on the Disney Channel, a powerful fan base was built through Disney's internal marketing as well as social media. The show became so popular that (primarily for branding and licensing purposes) Disney Theatrical Productions gave the green light to a stage adaptation of Newsies The Musical with music by Alan Mencken, lyrics by Jack Feldman, and a revised book by Harvey Fierstein.

After opening to strong reviews at the Paper Mill Playhouse on September 25, 2011, Newsies The Musical opened on Broadway at the Nederlander Theatre on March 29, 2012. The original plan was to keep the show running for 105 performances. But by the time the run ended, Newsies The Musical had racked up 1,005 performances and won Tony Awards for Best Choreography and Best Original Score. It also managed to recoup its $5 million investment in a record seven months!

The 43-week, 25-city national tour of Newsies The Musical recently played San Francisco where it was rapturously greeted by an opening night audience whose vociferous appreciation was well earned. At times, I found it difficult to divide my admiration between the show's physical production and the riveting cast whose muscular performance of Christopher Gattelli's exuberant choreography is irresistible.

When adapting a movie musical for the stage, it's easy to run up against curious challenges to the cinematic sweep and speed of the film. However, I can offer nothing but praise for the way Sven Ortel's digitally mapped projections and Jeff Croiter's lighting design have been integrated into Tobin Ost's skeletal sets so that the entire stage is in a constant state of activity. I haven't seen scenery dance around a stage so thrillingly (each of the three-story towers in Newsies The Musical weighs approximately 4,500 pounds).since the original production of Dreamgirls in 1981.

In the following video clip, set designer Tobin Ost explains how the creative team for Newsies The Musical came up with the look for the show's physical production.

As directed by Jeff Calhoun, Newsies The Musical is a triumph of fluid storytelling as well as a showcase for the cast's youthful energy. Dancers run up and down stairs with the kind of energy one expects to find in a middle school. With multiple playing levels, the action quickly morphs from ground level to two flights up. 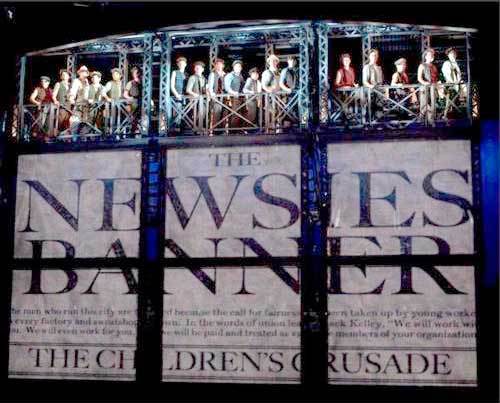 It's shocking to think that a musical about a labor strike in which young workers battled New York's media titans -- AND WON -- could have so much relevance in the year 2015, when workers in service industries are finding their tips disappearing into management's "service charges." With a cast of 27 men and five women, Newsies The Musical athletically -- and aggressively -- delivers a valuable lesson in why unskilled labor needs unions to fight for higher wages and increased benefits. 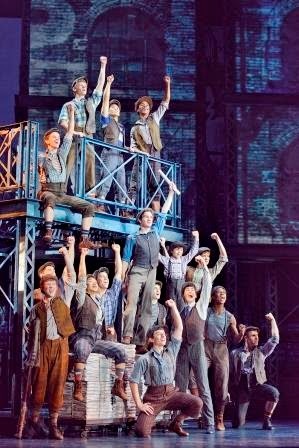 The cast of the national tour of Newsies The Musical
performs "Seize The Day" (Photo by: Deen Van Meer)

While most of the cast performs multiple roles, Steve Blanchard has some strong moments as Joseph Pulitzer, along with Kevin Carolan as Governor Teddy Roosevelt and Angela Grovey as the soft-hearted theatre owner and bawdy entertainer, Medda Larkin. The two romantic leads were solidly embodied by Dan DeLuca as Jack Kelly and Stephanie Styles as Katherine Plumber. 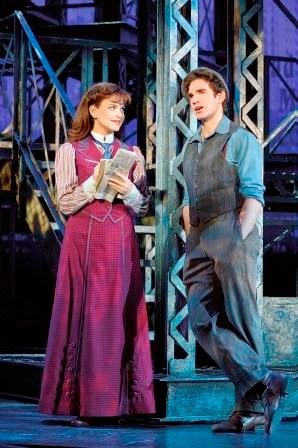 While the male ensemble is thrilling to watch, much of the action happens to quickly that it's hard to identify particular dancers (I was especially impressed by the man wearing a dark maroon shirt who had a smudge or tattoo on his right forearm). Strong performances in character roles came from Zachary Sayle as Crutchie, Jacob Kemp as Davey, and (on opening night) Anthony Rosenthal as Davey's precocious kid brother, Les.

I had only one major criticism about the touring production of Newsies The Musical, which relates to a frequent problem with shows that are booked into the Orpheum. The sound design by Ken Travis was so overpowering (the amplification had been jacked up close to the pain threshold) that it often made it difficult to hear Jack Feldman's lyrics or appreciate Alan Menken's score. Ratcheting down the volume by 15-20% would go a long way toward alleviating the sensation that the audience is being assaulted with a merciless bombardment of noise. Here's some footage from the national touring production: