American soldiers returning from Iraq and Afghanistan are suffering from new ailments that have nothing to do with bullets or bombs or battlefield stress. It was, they believe, something in the air.

As you might imagine, an army produces a lot of garbage. And the U.S. military in Iraq and Afghanistan has burned tons of that trash since the beginning of the war. But these are not your average country trash fires. They are called burn pits and they are enormous, one was the size of several football fields. What's burned? Everything. Plastic to foam to batteries, computers and paint, even human body parts — you name it — it was stacked in these burn pits and set ablaze. Many times jet fuel was used as the igniter.

Thick, choking smoke from the fires often hung over U.S. bases for days and soldiers complained of the smell from the potentially toxic clouds. And now vets returning to the US are learning their battles are far from over, and some are blaming the smoke for lung ailments and other illnesses including cancer. Hundreds of plaintiffs have recently filed a lawsuit. The defendant is a familiar name from the Iraq war, KBR, Kellogg Brown and Root. The company was contracted by the military to burn the trash. 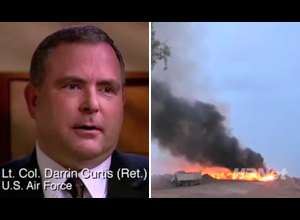 The largest burn pit was at Balad Air Base near Baghdad. It was the transit zone for thousands of soldiers entering Iraq. In his first television interview, a bio-environmental engineer is stepping forward to tell of what he witnessed at Balad. Retired Lt. Colonel Darrin Curtis told me of constant complaints from soldiers at the base. In 2006 he sent a memo up the chain of command stating that it was "amazing that the burn pit has been allowed to operate without restrictions over the past few years with no significant engineering controls put in place." Curtis listed contaminants such as benzene, arsenic, hydrogen cyanide, sulfuric acid, and warned that burn pits could pose acute and long-term health hazards. Curtis says his warnings were ignored. And he wasn't the only one to raise alarm. We found documents from a Marine Corps flight surgeon and the Army Corps of Engineers warning of health risks from the burn pit, including lung damage and cancer.

Now doctors studying these cases tell us they believe we could see thousands more become ill from the burn pits.

The military finally closed the pit at Balad last fall, but soldiers and former employees of Houston-based KBR tell us the same practices are still in place at a number of burn pits in both war zones.

KBR says they never operated the burn pit at Balad, and they say at bases where they did provide burn pit services, they did so in accordance with army directives. The Defense Department is reluctant to talk about this. The same pattern developed when first questions arose about soldiers' health and environmental concerns regarding the use of "Agent Orange" chemicals in the Vietnam War.

Whether problems growing out of "burn pit" use in Iraq and Afghanistan will ever reach the level of those caused by "Agent Orange" no one can yet know. Scientists we talked to believe the problems are real, growing and have the potential of becoming big-very big.

Everybody understands and appreciates that the initial thoughts of the military when it goes to battle is to accomplish its immediate combat mission--that taking care of things like garbage disposal cannot, should not be a first priority. But the protection of the lives and health of troops is always supposed to be an imperative of command--especially command at the top, and especially as first battles morph into long wars.

We're wrapping up an investigation into the burn pits and will have much more next Tuesday night May 4th at 8pm EDT on HDNet's "Dan Rather Reports."