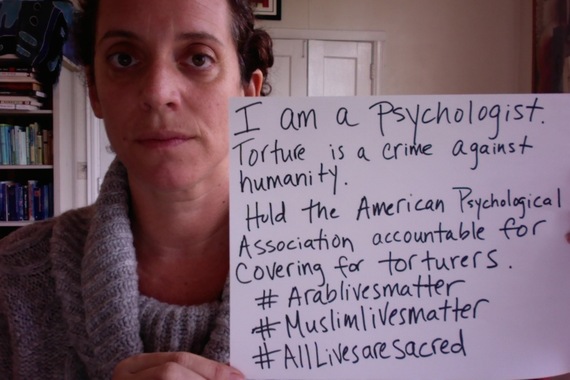 I first wrote about psychologists and torture for The Huffington Post back in 2007 when I was working toward my doctorate in clinical psychology and all hell was breaking loose around revelations that psychologists were involved in torture at Guantanamo Bay and other CIA black sites. I had just started writing my dissertation, which sought to explore the history and social forces that led to such insanity in the profession I was immersing so much time, money and energy into making my vocation.

I frankly had hoped the whole issue would be resolved by now -- the perpetrators would be in prison, the system would be reformed so that it could never happen again, psychologists would have organized and taken a powerful stand against this misuse of power in their name. Yet here we are, 10 years after the first revelations of torture appeared in the media, my dissertation long since bound in obscurity in my school's library, and not only are the revelations still coming, there is only now the first hint of a real investigation into the specific role psychologists played in this process. With the release of the Torture Report, also known as the Senate's highly-redacted executive summary from the "Committee Study of the Central Intelligence Agency's Detention and Interrogation Program," I realized it would be morally remiss of me not to take this brief minute when the public eye is trained on this issue to share some information with you.

I want to offer a few key points for you to keep in mind as the discourse around this recedes out of public consciousness and we all go back to business as usual. Since it's hard for anyone to read news that isn't itemized these days, I offer you my own list of awful truths:

Psychotherapy is fundamentally about love. It is through love that we connect and heal one another and is, in my humble opinion, what is being referred to when we talk about the "therapeutic alliance," or refer to the ineffable healing process in therapy that scientists just can't quantify, try as they might. But we therapists mustn't be content to keep our love confined to the therapeutic hour or the individuals with whom we work. Just because our work with clients is private and confidential doesn't mean that we must live private and confidential lives. As Martin Luther King, Jr. said, "Power at its best is love implementing the demands of justice. Justice at its best is love correcting everything that stands against love." As a group we tend to be conflict-averse and we're used to holding a great deal of space for complexity, can imagine the inner lives of perpetrators and victims alike, and have trained ourselves to reflect instead of react. In this way we have a great deal to offer the suffering world, but we must step out of the confines of our cozy offices and actually find one another first. Otherwise we are just passing each other in life's hallway for a quick pee break between sessions.

*A longer version of this blog is avaiilable at Psychotherapy.net.