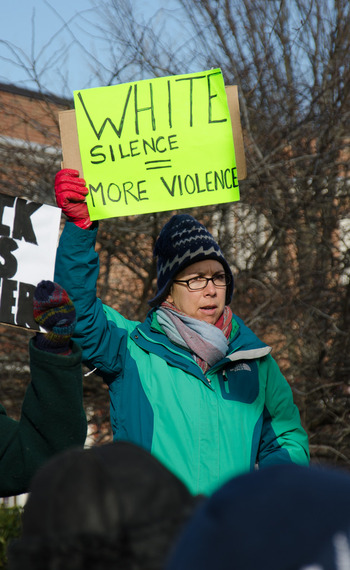 Something Wicked This Way Comes is not only a sinister 1962 fantasy novel by Ray Bradbury, it is also descriptive of the malevolent and growing power of white supremacy in the United States.

This accelerating menace is an urgent faith challenge in 2016.

Here's where we are today: African American children and adults are killed with impunity, callously injured and incarcerated at rates that make the United States a world pariah. Conservative presidential candidates are getting explicit support from white supremacist organizations that have crawled out of the woodwork, drawn by hateful rhetoric against African Americans, immigrants and Muslims.

While white supremacy is by no means new, this is a new moment of accelerated marketing of fear and hate packaged as a promise that if you are a white person you can get a sense of control over your life. Never mind the real reason why you feel out of control is because your job went to China and your company executives spent your retirement. White supremacists, like the carnival barker in Bradbury's novel, know the secret desire for power in the human heart, and the buried fears that give rise to those desires, and they exploit them.

Across a vast and diverse faith community, we have to recognize this desire and its powerful emotional lure: feeling superior as a white person over those of other races, especially over African Americans, is formative for many, taken in sometimes with mother's milk and continuously fed through culture, law, politics, economics and religion.

Yes, religion. I know as a white Christian pastor and activist, I need to step it up, and confront this menace both within Christianity, as well as in society. A white God, a white Jesus, and a white church will never be allies in the struggle against white supremacy; they will, at best, be unconscious enablers. As sociologist of religion Dr. Cheryl Townsend Gilkes notes in her chapter "Still the Most Segregated Hour, ""Religion is a motive force in the construction of the United States as a racialized society."

If a white person would be a faith ally in the struggle against white supremacy, it is crucial to look inward at religion and, frankly, change that, while at the same time attending carefully to those who are being crushed. Don't blithely assume you can help.

This is where liberation theology can be helpful.

Liberation theology always starts with contextual analysis, as Mary Potter Engel and I write in Lift Every Voice: Constructing Christian Theologies from the Underside. Let's start from the realization that white supremacy IS the context of the U.S., that it is a long-standing system of vast exploitation and immorality as Ta-Nehisi Coates wrote so powerfully in The Atlantic as "The Case for Reparations." "Two hundred fifty years of slavery. Ninety years of Jin Crow. Sixty years of separate but equal. Thirty-five years of racist housing policy."

This, this is why white supremacy is wicked.

Wickedness is more than sin and evil. It is, in fact, the malignancy of sin and evil combining and reinforcing each other, as Mary Potter Engel put it so well in our book:

Evil and sin together may be called "wickedness," the complex condition of the lack of right relation in the world in which we live naturally, socially, and individually.

Evil is the systems created by centuries of oppression, sin is the "free and discrete acts...that create or reinforce these structures of oppression."

Structures. Systems. White Christian complicity. Take those as a given. Then, move outside theology to get more help.

Liberation theologies often use social science as a lever in rooting out dominance in traditional theologies and finding ways to make practical common cause in liberation struggles.

Sociologists have described what they call wicked problems. These are problems that are driven by a vast number of interconnected forces that sustain and grow them. Wicked problems are characteristically difficult either to recognize or to solve. Horst Rittel, one of the first to formalize a theory of wicked problems, cites ten characteristics of these complicated social issues, some of which stand out as particularly applicable to white supremacy.

Wicked problems "have no definitive formulation" as they have different patterns in different locations. White supremacy in Chicago, IL, for example, has important differences in terms of historical roots, as well as economic and political structures than the white supremacy of let's say, Charleston, South Carolina. Effective activists know this. They use this.

White supremacy is a "wicked problem" because it "bleeds." That means there are no boundaries to its causes or its effects. Instead, white supremacy permeates education, law, law enforcement, economics, politics, religion and, broadly speaking, culture. Sexism, racism, homophobia, trans-phobia, Islamophobia and classism all need examination and action.

One telling example: a "celebration" of an African American woman athlete such as Serena Williams devolves into a discussion of her arms or her general body shape, engaging in body shaming and reinforcing racist attitudes toward African American women.

The model of Wicked Problems holds that those who would engage them must "take responsibility" for the consequences of their interventions.

This is a big one for faith activists. Your good intentions don't, and I intend this in a theological sense, mean a damn. Don't just muck in. Study, care, consultation and coordination are a big part of being effective in dealing with even a part of wicked problems.

It is also important to realize there is no "solving" wicked problems, there is only creativity that can tackle its many manifestations, subvert and mitigate their most destructive effects and engage creative alternatives.

#BlackLivesMatter has rightly garnered respect and support from white faith organizers because of its specificity, creativity, analytical wisdom and strong actions.

But it is crucial that white people of faith engage our fellow white citizens, Christian and non-Christian and do a lot of work. If you have read this far into this post, you already likely believe that.

Showing Up for Racial Justice is a "national network of groups and individuals organizing white people for racial justice. Through community organizing, mobilizing and education, SURJ moves white people to act as part of a multi-racial majority for justice with passion and accountability." SURJ was founded in 2009. It is telling that in January of 2015, there were only 12 chapters. Today there are 140, and 14 working groups such as SURJ Faith and SURJ Families.

There are others, of course, such as GroundWork. This group, out of Wisconsin, organizes white people "against racism and white privilege and for racial justice and equity in our daily lives from the heart, with dignity, and integrity." It is collaborative and practical.

Chicago Theological Seminary where I work, has been intensely focusing on racism and white privilege for several years. Many other seminaries have as well. Individual churches are making such commitments, such as All Saints Church in Pasadena. There are many others.

This is all good, but like in Bradbury's novel, I see the wickedness of white supremacy as a storm rising in 2016, threatening and coming towards us. White supremacy is dangerously growing. There are crackles and flashes of astonishingly virulent hate and fear. We will need all the faith confidence we can muster against the "principalities and powers" (Romans 8:38-39).

There is good news. I believe no matter how powerful wicked systems can be, they are no match for grace shared in community and the love of God and neighbor.

But you can see the winds gathering, so we better work harder.