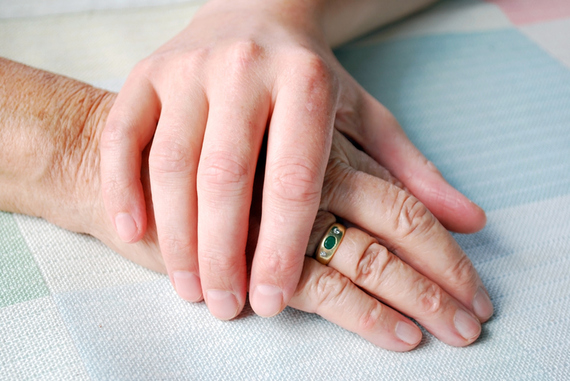 "I love my mother -- but sometimes I hate her, too." Saying those words out loud -- or even to yourself in your head -- can be a painful acknowledgment that even late in life we can't always make our relationships with our parents work out the way we want them to. And when you're caring for an aging or ill parent, having mixed or negative feelings can add guilt, sadness, and self-blame to an already difficult situation.

"Being a caregiver, or living with a caregiver, isn't easy like they portray it in those stupid commercials on TV," says Barbara Tubbs Hill of Florence, Alabama, who took care of her mother with Alzheimer's until her death several years ago. "They make it seem so sweet and nice, but it's not always like that."

Caring for a Parent Who Wasn't a Good Parent
If your childhood wasn't a happy one, or you didn't have a good relationship with your mother or father, it's no surprise that finding yourself in the role of caregiver can feel complicated. "I take care of my mom, but I don't feel warm and fuzzy towards her," says Susan Witherspoon (not her real name) of Knoxville, Tennessee, whose mother moved in with her last fall.

"My mother had favorites growing up, and I wasn't one of them," Susan says. "She was never cuddly, appreciative, or complimentary -- at one point she even disowned me. Once when I was young I asked my sister, 'How come she doesn't like me?' and she told me, 'She's jealous of you,' but knowing that didn't help."

Susan kept her distance from her mother for much of her life, but when her sister called and asked Susan to take over caregiving duties, she agreed. "I figured, I've had my reprieve, now it's my turn. I'll stick it out as long as I can, but I'm not going to take care of her every day until the end -- I just can't do that to myself."

To protect herself, Susan says, she's had to distance herself. "I think I've just turned the switch off to that part of myself," she says. "If my mother says thank you for taking her to the bank, I say you're welcome, but I don't wait for it. I've turned off my expectations. I've resigned myself that this is going to be it -- she's never going to acknowledge what happened, or apologize."

What's helped most in dealing with her mother, Susan says, is the Caring.com community, where she's connected with others who feel the same way.

"You think you're alone having these feelings, and then you find other people are going through the same thing and you don't feel so bad."

Other Caring members say what's worked best for them is to try to separate the present from the past. "I will never be able to erase my childhood, but I've let those feelings go," says one anonymous Caring.com community member. "My mother was not the best mother, and it would be very easy to write her off, but she is what I had and she deserves to have someone looking after her now."

Caring for a Loved One Who Says Mean Things
"Remember that old song, 'You Always Hurt the One You Love'? That's how it was with my mother," says Barbara Tubbs Hill. "We loved each other, but we could cut each other to the quick faster than anyone." As her mother's disease progressed, she says, her personality underwent a drastic change. "My mother went from thanking me for all the things I was doing for her to being angry with me all the time."

Perhaps hardest of all, Tubbs Hill says, was watching her mother speak kindly to others, then turn around and be cruel to her. "My mother could turn on and off in an instant -- she could be so nice and sweet to someone else and then give the me devil over nothing. Being late, not coming to take her somewhere on her time schedule. But now that's she's gone, I miss her more than I ever thought possible."

One way that many caregivers say they deal with angry or even abusive talk is to realize it's often not about them. "One thing I realized too late was how fearful my mother was, of everything, all her life. And the illness she had scared her so much, she struck out at the person who was always there for her, which was me," Tubbs Hill says. "I wish I had known how to handle it better, but I didn't."

"It helped me to talk to her doctors and understand what the disease was doing to her, as well as the effects of her medications," she says. One Alzheimer's drug in particular, she feels, was responsible for her mother's lashing out. "You can realize you love them, but you don't necessarily like them very much. And you certainly don't like the things they do."

Caring for a Loved One Who Never Says Thank You
Some people are grateful for help as they get older, and some take that care for granted, or are angry and resentful that they need help at all. That's the reality of the situation, as many members of Caring.com are quick to acknowledge.

"I took my mother in and cared for her for three years, and the sad part is that she was never happy," says one anonymous Caring.com community member. "Nothing I did ever satisfied her." After a fall sent her mother to a nursing home, the care and attention seemed to please her for awhile, but it soon wore off. "Now she's no happier than she was in my home. The moral of the story: some people aren't going to be happy no matter where they are."

Your Loved One's Ingratitude Is Their Failing, Not Yours
The secret to dealing with lack of appreciation and avoiding resentment, caregivers say, is to understand that your loved one's ingratitude is their failing, not yours. "I came to realize that while I was devoting my life to her, she wasn't going to like, love, or approve of me any more than she ever had," says one Caring.com community member. "She didn't see my taking care of her as a big deal, and I started to see how little she valued what I was giving her." It took time, she says, but in the end she learned a valuable life lesson. "What Mom gave me was the perspective that her inability to love and approve of me was about her, not about me."

Several years out from her mother's death, Barbara says she's only now making peace with everything that happened. "I didn't realize how much anger and hurt I had stored inside me until after she died," Barbara says. Working with a counselor helped her lay those feelings to rest and get some closure.

"Counseling helped me realize I really had done everything I could to help her," Barbara says. "And it helped me to remember what my mother was really like; she wasn't a bad person, it was the illness and her fear that made her act like that. I won't ever be able to forget all the terrible things that were said to me, but I know the person saying them was not the mother I had known and cared about. "