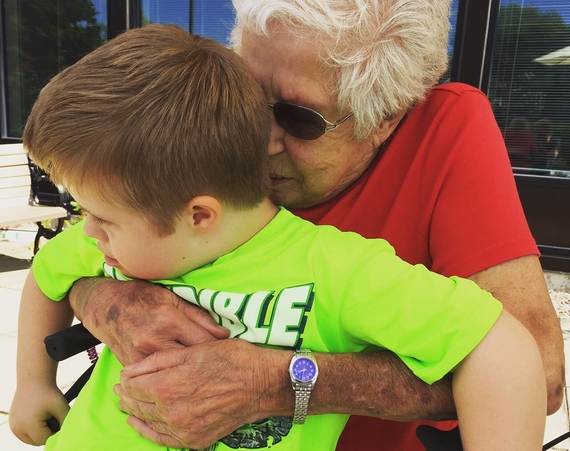 Like an anthropologist who practices participant observation I have come to discover that 8-year-old boys and 84-year-old women are similar in ways that bug the crap out of me:

Neither of them actually listens to me.

I am repeating myself constantly and the content is almost identical. "Get outside! It's too beautiful to be inside watching TV," or "No more sugar," (substitute 'salt' for my mother).

Even a regular interchange is lost on them. I tell them something I find interesting -- like my excitement over a recipe for peanut sauce and their response is: "Is there cake?"

They demand rather than ask.

They are obsessed with bowel movements.

My mother texts me after she has one and indicates the weight she lost as a result. If she is very productive I might get a couple more notices during the day. My son insists I come and look at his. Similar to a game show model he makes a sweeping hand gesture over the toilet bowl: "Ta dah!"

Related -- they both fart non-stop and think it's funny. Fortunately for me I have chronic sinusitis.

They are easily frustrated.

This frustration is often related to technology. My son exclaims: "Not working!" after waiting two seconds for YouTube to load. My mother's first response to any delay in the functioning of her TV, computer or phone is to yell: "Well, it broke again!"

Neither of them completely understands the internet. My son says: "Wi-Fi down!" every time we pull out of the drive-way. My mother was shocked people in France read my blog. "How is that possible so far away?" she asked. "Mom, it's called the World Wide Web." "Ok, Show Off, that's enough."

They team up against me:

This happens a lot in the car. They sit in the back together and pretend not to hear anything I say. It's like Driving The Two Miss Daises. They make demands for ice cream. My mother says things like: "When your mother was your age, she was a real cry baby when she lost at anything" or "She used to run around the neighborhood naked." What the Hell! No one in the car was talking about losing or nudity! My son laughs and offers her a sympathetic sigh at her parenting challenges with me.

They are both fighting for their independence.

My son points out all the things I do not have to help him with any longer because: "He is a big boy!" My mother says: "You're bossy. I don't need a mother."

The difference is my son's abilities are growing steadily. He is doing more for himself as time passes. As he becomes more independent my heart swells.

My mother has been hospitalized seven times in nine months mostly arriving by ambulance. She is doing less of the things she used to do and it breaks my heart.

The upside to all of this is they are actually friends. I think friendship is the ideal relationship between grandparent and grandchild. For that reason alone I can accept being the third wheel.

Kari Wagner-Peck writes on typical life at her blog: a typical son. You can follow her on Twitter @atypicalson.