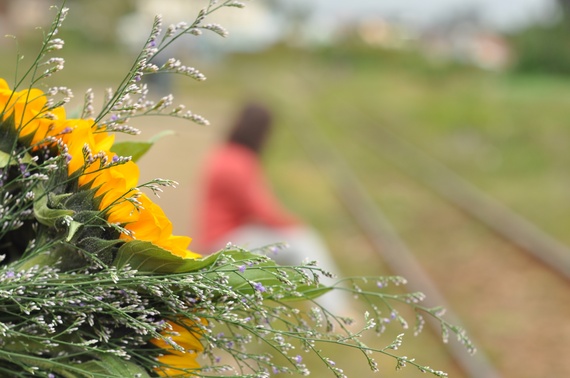 The beginning of May is filled with pastel hallmark cards lining the aisle at the super market and beautiful flower arrangements and corsages greet customers as they walk through the automatic sliding doors. Commercials urge us to remember the mothers this month through a variety of scenes--both hilarious and tear inducing. It all paints a heartwarming, sentimental, and lovely picture. The second Sunday in May is set aside each year to honor the women who have raised or are raising children. And it's beautiful.

But some women are crying in the ice cream aisle of the store and changing the channel when the commercials come on and diverting their eyes all month. Some will make plans to stay home from church this Sunday, to avoid restaurants and most public places where they will be sure to be cheerfully greeted with a, "Happy Mother's Day!" Because sometimes Mother's Day hurts.

I know, because for years I was one of them. I would hide under my covers just a few minutes longer, forcing myself to get our of bed and ready for church. I would hope that the sermon wouldn't be entirely built on motherhood. I would take an unnecessary bathroom break just when the pastor would ask all the mothers in the room to stand so everyone could applaud, and I'd duck out early to avoid the chocolates or flowers that were being passed out after the service... just for mothers. I would go home and cry and hope that this would be the last year I ever felt so low on Mother's Day.

I struggled with feelings of guilt and selfishness. I have an amazing and beautiful mother and enjoy a great relationship with her. I had people to celebrate on this day and I did. But it still hurt, and over time I learned that I was okay. It was okay to love and honor my mom, while aching over what was lost.

It hurts for the woman who is single and longing for someone to build a family with. It hurts to feel unimportant, unappreciated, and less-than. And she might know in her mind that message isn't intentional, but it doesn't matter because her feelings don't match.

It hurts for the couples who have been aching for a baby for years. Who have been through the ringer with fertility testing and treatments and can't figure out why it seems so easy for others and yet just won't happen for them. It hurts to be reminded that you can't do something that comes so naturally to others and it hurts for there to be a giant annual celebration for something that is causing so much heartbreak in your own life.

It hurts for the woman who is in the process of adopting, but while pregnant mothers are honored and recognized, she is not. Sometimes the world doesn't know what to do with adoption, so after the church service when all the pregnant women are given flowers, she is passed over. It hurts to feel viewed as second rate and she wonders if her family will be viewed that way once their child comes home.

It hurts for the foster parents and adoptive who are protecting little hearts on this complicated day. They are responsible for helping their children navigate confusing feelings about family and motherhood and who to celebrate and how and why. All while wishing life could be a little more simple for everyone -- just for a day -- but also recognizing the great honor it is to be the one to sit in the hard with these precious children.

It hurts for the mom whose teenager is heading down a dark and dangerous path and while she has tried everything in her power to "save" her child from the pain that road brings, nothing has changed. She sits and wonders what she did wrong even while knowing that sometimes you can do everything right and things still go wrong.

It hurts for the mother grieving the loss of a child (or children) as she is reminded that this year and every year her child will not pad down the hall with a homemade card and burnt toast. The pain is unimaginable but everyone else seems so happy ... how is that possible?

It hurts for the woman who has a strained relationship with her own mother and who wishes the day could be filled with brunch and long talks and laughter. But instead she goes over the last phone call, the cold goodbye, and the deafening silence since. She wonders what life would be like if that relationship was different and tries not to focus on the "what ifs."

It hurts for anyone whose mother as passed away. A lifetime of love and nurturing poured out, and then gone. And even if the memories are good, it still stings to know you can't just pick up the phone and say, "I love you" one more time.

Mother's Day can hurt. It can also be a beautiful time of joy. I believe there is a way to honor mothers while being sensitive and loving to those who find this holiday hard. We can reach out to those we think the day might be hard for. We can send a card or text or email to let them know we're thinking of them. We can't take the hurt away, nor should we try. But we can let them know they aren't forgotten and they are loved and important. We can show that we won't let the hurt scare us away or silence us. This Sunday, in the midst of our celebrating, let's be sure to love all the people in our lives well.

More:
Parenting InfertilityParentsmiscarriageMother's Day
Newsletter Sign Up
Raise the kind of person you'd like to know
Subscribe to our parenting newsletter.
Successfully Subscribed!
Realness delivered to your inbox