Ok, I know I am supposed to be promoting traveling with kids, and the benefits of taking your children on the road, but sometimes, vacationing with young people just plain sucks.

It's not like all my travels are filled with memorable moments of snapping photos of butterflies and practicing a new language with my kids. I've had my share of challenges. I lost Kai at our condo in Kauai; once he stuck his finger in a moving fan while I was having a foot massage in Bangkok; another time he vomited all over me on a plane ride and the flight attendant shrugged, gave me wipes to clean it up and then I had to sit in the stench for four hours. Trust me, the list goes on.

But it turns out some of the most challenging moments of my family-traveling career have occurred in the simplest moments, when my travel plans crash into my children's desires and I am left standing in a foreign country, oozing frustration that I cannot tour a particular temple in Kyoto, or enjoy a bowl of ramen without having to be constantly on toddler-suicide-patrol and placate a bored six-year-old. 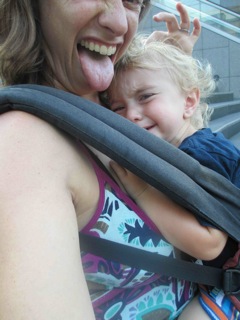 We just got back from a whirlwind trip of Japan (more on that in the next few weeks). It was Nikko's first international trip and Kai's fifth. We chose Japan for a slew of reasons, including, but not limited to, snow monkeys, bullet trains, real summer, yummy food, culture and a family friendly vibe. We didn't realize the frenetic pace of the world's fastest moving country would amp up our children, overstimulate them (and us) and leave us all in need of a vacation.

I knew the jetlag would be brutal -- it's eight hours difference between California and Japan -- and while it was in fact a nightmare dealing with being awake all night and falling asleep at 4 p.m., then 5:30, and finally pushing it to a whopping 8 p.m. until the last few days of the trip, the real challenge was dealing with jet-lagged Kai and Nikko in the hotel room in the middle of the night.

On those first nights in a new time zone, I like to stay at a fancy hotel with 24-hour room service. In Tokyo, we selected at the lovely Hotel Chinzanso Tokyo, one of the most stunning properties in the city. The former royal family's vacation destination, the hotel boasts the most comfortable beds on the planet, a lush pagoda-topped garden (with fireflies in summer, though too bad we couldn't stay up late enough to spot them), gourmet restaurants galore, and the type of service that dignitaries and royalty come to expect.

Yet there we were with our wild and crazy boys, who decided to wrestle, play in-room baseball, talk in voices they typically use on the playground, and throw massive tantrums at three in the morning. And then there's my husband and I, trying desperately to teach our children to respect others and be quiet in the hotel, to no avail. It's a wonder the didn't kick us out.

Especially because they took their brand of chaos into elevators, on escalators, through the breakfast restaurants, and into the lobby. By day two, after riding on trains and seeing that no one talked at all, not on trains, not in restaurants, not on the streets, I realized my children were possibly the loudest humans in Japan.

It seemed to get worse in Kyoto after taking Avi Lugasi's informative tour of Nijo Castle, the former samurai outpost, and learning that Japanese people teach their children to behave at a very young age, informing them not to bother others, not to think of themselves before their community, and to abide by the rules early on. Suddenly we noticed that kids are hidden away -- maybe until they learn to behave? They are rarely out in public, and when they are, they are guiding themselves to and from school on intricate subway systems. Silently, of course.

Our kids, on the other hand, are Americans, and they are, I tried to remind myself, children. They protest loudly when they are bored by the glory of Kinkakuji Castle, or complain that it's not fair when we are having a mom- and dad-choice day instead of staying in our lovely Windows to Japan traditional Japanese apartment to play Pokemon until noon, then ride the Shinkansen, and cap off the afternoon by exploring the Osaka Aquarium like we did the day before.

Don't get me wrong, we had plenty of life-changing experiences. All of us, including little Nikko, and many of which I hope to share with you. But there were times that I looked at my rambunctious kids, jumping on the subway, banging on windows, running through train stations at high speed, and complaining more than I cared to hear, that I wished that I was more like my cousin, who recently said to me that she hadn't taken a vacation since she had kids because she didn't want to spend all that money and feel like she wasted it because her kids couldn't deal.

Unfortunately, I am not that girl. I want to travel the world. And I want my kids to do it too. They might be Americans through and through, happy to find french fries in Hiroshima, and following the SF Giants from our hotel room, yet they are exactly as I want them to be, little humans with their own needs and wants. They can be shaped by our experiences, but no matter how hard I try, I cannot mold them into other people. I can just give them tools to shape their views of the universe and hope, just hope, that the glimpse of the bigger world we live in will help them be better citizens of the planet.

Teaching my kids about the world through travel