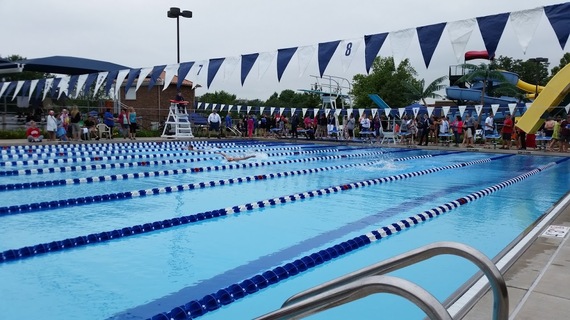 I grew up less than two blocks from a couple of swimming pools. I spent most summer days there... doing crazy jumps off the board, diving for treasure, creating stories, and generally horsing around. Notice "swim laps" was not in that little rundown. Though I love swimming, I'm no real swimmer. I mean, I can swim -- my dad made sure I knew how -- but I could never be competitive in it.

My son Tony has taken swim lessons at the park district since he was three, but he never really learned how to swim from them. Both my husband and I tried to help him learn, but he was not nearly as receptive to our tutelage as I was to my dad's. (Shocking. Not.) Last year, when there was still no sign of any decent strokes happening, we knew one answer that would get him swimming: swim team.

Swim team meant early morning practices and lots of meets. Tony stepped up and swam all that was asked of him. (It didn't hurt that his coach was a charismatic young man who the entire team loved. Props to Coach Joe... who isn't coaching this year because he joined the circus. I am not kidding.) 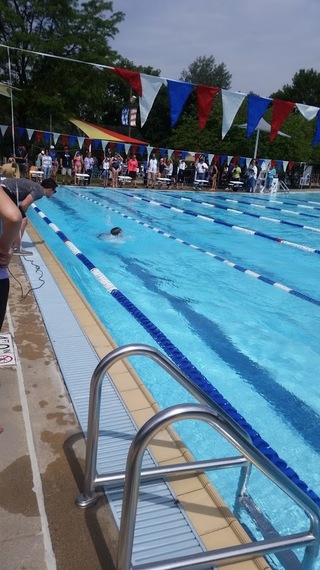 Tony didn't complain (much), and...as the season wore on, it was wonderful to see him grow stronger and more capable. Though his form needed a lot of work, he had become a swimmer.

He joined a team where most of his teammates had been swimming for years, and it was no surprise that he often found himself the last one to touch the wall. Still, over the course of the season, he was beating his times and knew that he was getting better. 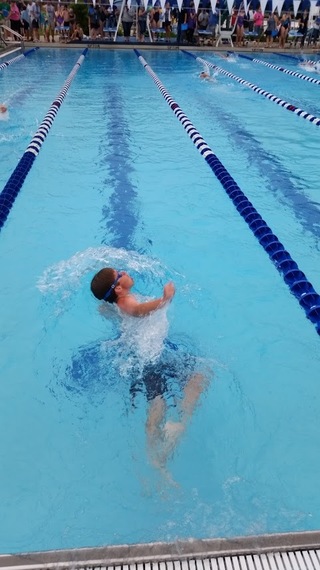 This year, his practices are even earlier (6-8 a.m.) and while the getting up and out isn't a laugh riot, he still swims all that is asked of him.

And this is how he found himself swimming the breaststroke this past weekend. Now, for me, breaststroke is my favorite since I never really got the whole breathing/swimming thing down pat. I mean, isn't it kind of like the "lady who doesn't want to get her hair wet" stroke? But for Tony, he knew he didn't know the form the way he should, and this would obviously not be his greatest race.

Instead of his head skimming the top, with each stroke he would fully submerge and slow himself down. He came in last, though he gave the next-to-last guy a run for his money. When I met up with him after the race, he was very frustrated. He's extremely hard on himself (apple, tree--tree, apple), and he was just shaking his head and looking dejected.

"What?? I was horrible! I hate the breaststroke. I don't know how to do it."

He looked at me with still a bit of a perplexed look, shrugged his shoulders, and said he had to go. I'd like to think that once his personal irritation with himself subsided that what I said to him registered. Of course, he's 13, and he may have just been looking at me while I was talking and thinking about food. But... I still have a glimmer of hope that he takes to heart what I said. 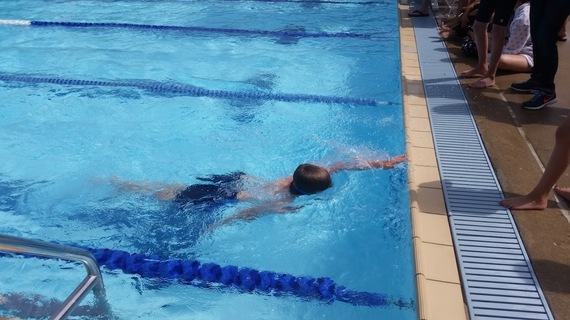 Too often we are so hard on ourselves when we have a subpar performance or fail at something altogether, but we need to honor the fact that we showed up. We got into the pool. We swam our race.

Sure, we may not end up with a ribbon, but it speaks to our strength when we show up knowing we are weak.

I have lots of "breast strokes" I have to face in life -- things I know I need to improve in or have to realize that my sheer and utter weakness isn't going to dissipate any time soon. But I should give myself kudos for showing up.

And you should give yourself the same.

If you are present at times that you know you'll end up last in your lane, give yourself grace and honor the fact that you got in the pool. You swam your race. You showed up.

Sometimes, that's all that matters. 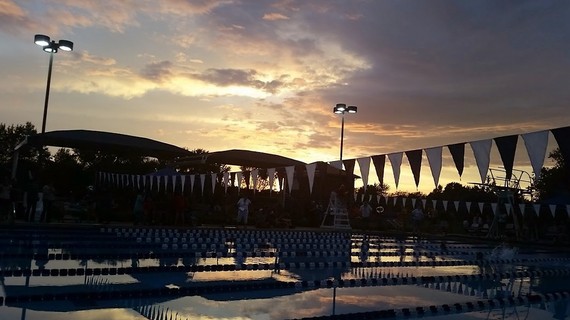 More:
learning swimminggraceParenting perseverance
Newsletter Sign Up
Raise the kind of person you'd like to know
Subscribe to our parenting newsletter.
Successfully Subscribed!
Realness delivered to your inbox

These Kids' Drawings Of Covid Are Genuinely Hilarious