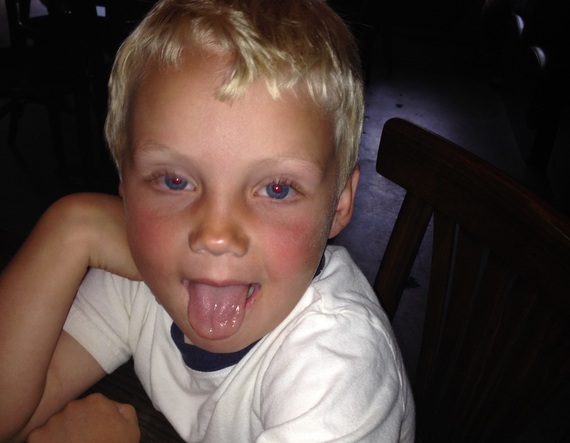 I relearned an important lesson this week: With kids, sometimes you have to follow through on all those threatened consequences.

This may seem obvious. It's straight from the parenting 101 books that I failed to read when I first started taking this experiential course in child-rearing a dozen years ago.

But, I've been told lately that I'm not very good at this whole follow through thing.

It's not like I go around making threats to my kids. It's just that sometimes they act like insane little monsters, and the fear of sanctions is the only way I can think of to get them to behave. So, threats happen.

Take, for instance, a dinner out I had on a recent night with two of our kids and their grandparents. My wife was out of town with our two middle kids visiting her sister, so I had responsibility for our 5-year-old boy and 12-your-old daughter for the week. My parents, fresh back from a summer trip to Michigan and Canada, called and asked if we wanted to have dinner at a neat little seafood place.

Sure, I figured. Why not?

What I didn't figure was that after a week with his father's later bedtimes and lack of disciplinary follow-through the 5-year-old boy would be primed and ready for his worst restaurant behavior in recent memory.

Usually, with his middle sisters around, he just blends into our family's typical restaurant commotion and acts kid-like but within acceptable parameters.

No such luck for our evening at the quaint little seafood place. He was standing on the booth seat, under the table kicking people, blowing bubbles in his chocolate milk, dribbling water out of his mouth, then spitting water out of his mouth, and screaming "What?" at the top of his lungs like he was shocked to hear something as a way to humorously add to the adult conversation. It wasn't funny.

I warned him several times that if he didn't act better, we would leave the restaurant.

Only one problem with my threat: I was trapped in the interior of the booth, and I was hungry. I guess that's two problems. But, it wasn't like threatening to take him out of church when he acts up, which I always follow through on because who wouldn't rather be walking around outside a church than inside it doing Catholic calisthenics on hard, wooden benches. Sit. Stand. Kneel. Sit. Stand. Kneel. That's an easy follow through. But I really didn't want to leave the restaurant and my soon to be arriving crab-stuffed baked sole. (Apparently, my sole is more important to me than my soul. But that's not the point).

So, despite repeated threats to go to the car that evening with the misbehaving boy, we didn't leave. His behavior never improved, though we survived, and later that night he fell asleep, finally granting me peace.

It served as a perfect example of me not following through on a threatened sanction, and I knew it. Thank goodness my wife wasn't there to witness the affair.

Anyway, I resolved to do better next time.

That next time arrived sooner than expected, when two days later I picked up the boy and his sister at the separate day camps they attend in the mornings and decided to take them to lunch.

As always, the kids picked Panera. Those grilled cheese sandwiches must have kid crack in them, I swear.

We arrived just after high noon. Like every Panera in the lower 48 at that time of day, there was a long line of people waiting to order overpriced, small portions of fast casual goodness. So good, I usually leave still hungry, yet noticeably poorer.

Waiting in line, the boy kept trying to jump up and grab my neck. I'm tall enough that he had no chance. But he kept at it.

"Stop that or we're leaving."

Then he started pushing his big sister.

Then he kicked me in the shins.

That was it. I grabbed him firmly by the arm -- not too firmly -- and told him he'd been warned and now we were leaving.

And then we left. We actually left.

"I'll listen! I'll listen!" he wailed as we walked across the parking lot to our car. He was certainly expecting us to turn around and go back into Panera. But I kept right on going; into the car and back to the house.

He cried the whole way.

I made him a much cheaper version of a grilled cheese at home and, after his fit died down a bit, he ate it.

Of course, leaving Panera for me was about as hard as leaving church -- an easy threat to make good on. It was also easier to enforce with just two kids in tow. If I've got four hungry kids and a hungry wife, I'm not likely to drag all of them back to the car because the boy is acting up. There's too much potential for collateral suffering.

Years ago, I remember leaving a grocery cart full of stuff and walking out with one wailing child -- who happens to now be 12. But in the time since, I must've softened to the point where I developed a no-follow-through reputation.

I don't know if this one bit of follow through will work to curb future bad behavior. But it sure seems to have had an impact. He's mentioned the episode several times since. I think he's still shocked that we actually left.

And, if I have to make the threat to leave again and he doesn't listen, you can bet I will make good on it. I just hope it's at Panera and not a quaint little seafood joint.