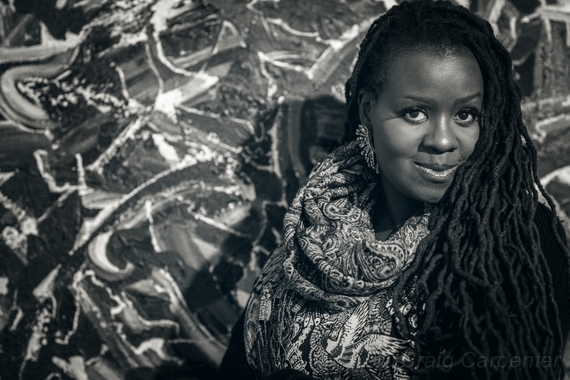 Last year I had the pleasure and honor to become acquainted with Somi, an amazing jazz singer who was then about to release her album, The Lagos Music Salon. I found her to be thoughtful, sincere, and an awesome talent. I reviewed that album and a previous show on this page. Since then, I've watched her career continue to blossom, receiving accolades world wide, picking up many new fans and providing an example for empowerment and women's rights everywhere she goes. It has been a joy to behold. Last night she performed at The Painted Bride Art Center in Philadelphia -- my hometown. It was another stunning performance, this time with her excellent band using more spare arrangements, allowing her voice to soar with the most firm yet gentle support. I welcomed the chance to catch up with her and see where her career has gone since last we'd spoken, and she was again gracious with her time. The following responses have been edited for length and clarity.

When last we spoke, your album, The Lagos Music Salon, had just been released and you were in the crowd at another musician's performance. That was about 8 months ago. How has your life changed since then? With this being your second album, how has the experience been different?

Ever since the album's release, I've been given so many wonderful opportunities to share my music with both new audiences and long-time supporters. I'm so very grateful for all of that, but not sure that I would say that my life has "changed" per se; only that I've been able to reach more and do more through my creative practice. I would like to believe every artist is interested in more expansive 'dreaming and doing' - it's a beautiful thing when there are clear markers of that along the journey.

This is actually my fourth album, but my first on a major label. Obviously there is a certain type of social and cultural capital that accompanies that and which can open doors to even more visibility and career growth. More than anything, I feel fortunate to be counted among a long list of artists I respect deeply on the label's catalogue.

As we'd discussed before, much of that album was inspired by the time that you'd spent in Nigeria, and you've also had travels in Africa recently. Can you explain your continuing connection with the continent, and how it affects your artistry? How were you received abroad this time?

The majority of my very large extended family live in East Africa, so my connection to the continent is deeply personal. Since I grew up mostly in Illinois, however, I became curious about my definition of "home" at a very young age. My work, therefore, seems to always be in pursuit of the cultural space between both here and there; as I really do feel equally African and American. I will say, though, that I feel more inspired on the African continent than anywhere else on this planet. I think that has something to do with the knowing that we have so many stories that have yet to be told - stories that give a more balanced and whole picture of who Africans are and can be in today's world. It's such an exciting time on the continent, no matter what industry you are in, and I love when I have the chance to plug into that energy and inspiration. Hopefully 'The Lagos Music Salon' album has helped audiences reimagine the humanity of Lagos or any other modern African city.

My recent trip was wonderful. I spent 6 weeks traveling through South Africa, Uganda and Rwanda. My time in East Africa was purely recreational and all about catching up with family. In Johannesburg and Cape Town, however, I was working: performing, doing lots of press, and shooting a new music video. South Africa has a deep musical history and love of jazz. I love how passionate and open-minded their audiences are. After performing there a few times, I've been able to connect with a really loving and growing fanbase there who really support what I'm trying to do. It's definitely a country where, as an artist, I feel most at home. I'll be heading back this spring and can't wait!

One of the things that stands out in your music is the way that you weave topical messages in with, for lack of a better descriptor, adult contemporary sensibilities. To what degree is that a part of your process?

Ha! I can't help but laugh a bit at "adult contemporary sensibilities." Whatever the sensibilities or aesthetic one hears in my music, it's not something I necessarily set out to do. My music making is an organic process. No matter what the subject matter of the song, I try to honor all of my musical influences - whether they be jazz, hip-hop, afrobeat, soul, or (dare I say it to) something that sounds both adult and contemporary. At the end of the day, I'm really just trying to tell stories and frame them as best I can. 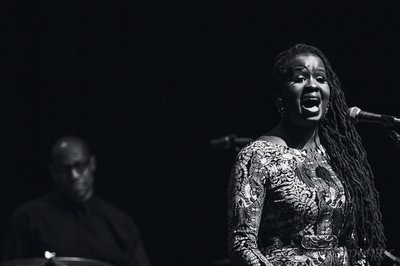 You're at a point in your career now where you are starting to repeat appearances in certain cities. How does it feel, for instance, returning to Philadelphia, albeit in a new venue?

It always feels great to come back to a city and have the chance to reconnect with and hopefully grow your audience in each place. As a New Yorker, Philly feels like the next door neighbor that I never get to spend much time with or get to know very well, so I am really excited to spend more time there and in other East Coast cities on this tour.

Having witnessed your performances a few times now, I know how well you communicate specific and regional ideas into a common experience. The song, "Ginger Me Slowly" is one such example, which means to make one feel spicy and sweet. This is also your newest video release. Can you explain some of the ideas behind that production? How do you like making videos in comparison to making music?

Well, I haven't made a lot of music videos, but it's an entirely different process than making music. Mostly, I just love having the chance to think about and create a new performance of a song through a different medium and new creative dimension. I wanted the video for "Ginger Me Slowly" to have feel both intimate and artful. I also wanted to do it in a way that made one think about how nuance hides in minimalism. The song "Ginger Me Slowly" is about dreaming of a big and expressive kind of love, but it's also about learning to appreciate the simple yet meaningful declarations of that love. When choosing a treatment, I decided to go with South African director Kyle Lewis because it seemed to evoke all of those things. Hopefully audiences see that too!

What was most surprising about your tour thus far?

I love the surprises that sit inside of my band's improvisation every time we get on stage. Even though we've performed the music countless times, they continue to inspire and push me in ways that make the songs feel like a nightly chance to rediscover something new in my own voice and the very stories I'm trying to tell.

It's probably too early for fans to be expecting a new album, but have you made any plans yet for how you may approach your next project?

Well, I recently collaborated with Lebanese-French trumpeter Ibrahim Maalouf on a song cycle about the role of women during the Arab Spring Movement. We premiered the music at the Kennedy Center last May and really love the music so we're hoping to record it in the not-so-distant future. I've also just begun working on a jazz opera about the late South African singer and political activist Miriam Makeba. I'm not sure if and when that will become an album, but I'm looking forward to sharing more about that as it unfolds.

Somi continues to tour, with upcoming dates in New York, Boston, Vancouver and returning to the continent of Africa to perform at the Harare International Festival of the Arts. Her latest music video, "Ginger Me Slowly" makes it's debut here.